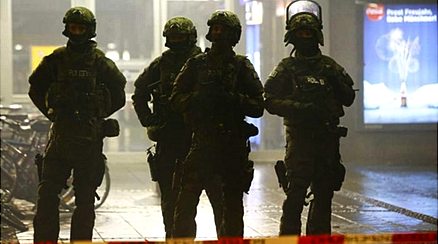 Two train stations in Munich were shut down just before midnight tonight after police issued a warning of an imminent threat (tweet by the Munich police [in German]).

Police in Munich Warn of ‘Imminent Threat’ of Terror Attack

BERLIN (AP) — Police in Munich warned of “serious, imminent threat” of a terror attack late Thursday and asked people to stay away from the city’s main train station and a second train station in the city’s Pasing neighborhood.

In a statement posted on Facebook, police said that according to “serious information, there could be an attack tonight.”

The warning came about an hour before the city rang in the new year.

Police said they had received two different, “concrete” tips but did not elaborate on the nature of the threat or who had warned them.

Police in Munich evacuated two train stations in the city after getting word of a possible terror attack.

Officials said they got hints of a possible bomb attack, specifically in the main Munich train station and the Pasing station, a police spokeswoman told ABC News.

Both train stations has been evacuated, police said.

Officers who were off duty for New Years went into work and are now performing sweeps of the stations. Police have not yet found anything suspicious, they said.

As of this writing, there have been no reports of any incidents in Munich since the stations were evacuated. That could mean (a) the threat was a false alarm, (b) the terrorists called it off when they saw the buildings evacuated, or (c) the incident was a probe.

Here’s how a probe might work. Let’s say you’re Ahmed the ISIS terrorist, the head of a terror cell in Munich. You know you’ve got a snitch in your operation who feeds information to the cops, so you whisper a little disinformation to him — you tell him the mujahideen are going to ventilate the kuffar at the Hauptbahnhof and the Pasing station on New Year’s Eve. Then you send out operatives to watch the response of the authorities:

That tells you what you need to know when you’re ready for a real operation. One small bomb in the Hauptbahnhof, and then specially targeted follow-up attacks timed for the right moment and designed to do the maximum damage to the security forces, kill lots of civilians, and create mass terror.

The following email was sent out tonight by the U.S. consulate in Munich (it’s already tomorrow in Germany):

The U.S. Consulate General Munich alerts U.S. citizens to information transmitted via Twitter within the last hour by the Munich Police of a terror threat in Munich. According to Munich Police, all group gatherings and the Hauptbahnhof (main train station) as well as the Pasing train station should be avoided.

All U.S. visitors or residents in Germany should be aware of their local security situation, and take appropriate steps to bolster their personal security. There is a continuing threat in Europe from persons planning attacks inspired by major terrorist organizations but conducted on an individual basis.

U.S. citizens are encouraged to monitor media and local information sources and factor updated information into personal travel plans and activities. Specific safety concerns should be addressed to German law enforcement authorities who are responsible for the safety of all visitors to Germany.

Hat tips: For the articles, DV and LP; for the tweet, Vlad Tepes.

12 thoughts on “Terror Alert in Munich”