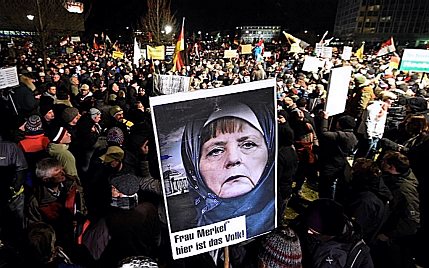 The following article from yesterday’s Bild outlines the political difficulties German Chancellor Angela Merkel is facing due to the “refugee” crisis. As JLH, who translated the piece, points out, “When Bild prints an article like this, you know that Merkel is in serious trouble.”

Chancellor Angela Merkel has to manage a marathon program today in the refugee crisis. Her day of stress began with a cabinet meeting in Berlin, in which she made Head of the Chancellery Peter Altmaier the refugee coordinator. Then she hurried to Strasbourg and gave a long speech before the European Parliament.

Her key message to the continent: “We are facing a challenge of historic proportions.”

Then in the evening, the finale on TV: Before a public of millions this evening in the ARD program, “Anne Will”, the chancellor intends to explain her course in refugee policy.

There is tense speculation on whether she will repeat her controversial statement: “We can do it!”

The chancellor must urgently intensify her efforts to convince.

Because concurrence with her refugee policy is crumbling in her own ranks and resistance in the CDU and CSU is growing.

Merkel received a red-hot communiqué about her refugee policy, signed by 34 party functionaries and eight federal states. It said: “The presently practiced ‘policy of open borders’ is compatible with neither European nor German law, nor does it harmonize with the program of the CDU. Therefore, a large number of members and voters of our party no longer feel that they are represented by the present direction of the CDU-led federal government in refugee policy.”

There are no prominent leaders of the parties [CDU-CSU] and not one Bundestag representative among the signers. But Merkel must assume that many CDU members may feel the same as the signatories.

Rebellion of the CSU

Merkel is under still more pressure, because the CSU is rebelling against her refugee policy ever more openly.

At a meeting today of Bavarian district heads and mayors in Ingolstadt, Bavaria’s governor, Horst Seehofer (CSU) threatened “effective self-defense” of the Bavarian Free State, if the federal government did not further provide for a limitation of the numbers of immigrants.

Then the Free State will have to consider what to do, said the CSU chief later in the meeting, “Otherwise Berlin will say that the Bavarians are always saying the limits have been reached, but they continue on and manage it anyway.”

At the press conference following the meeting, Seehofer said that everyone had to be conscious of the dimensions of the task. Integration of refugees must be strengthened, but nothing must be taken from one to give to another.

BILD spoke with participants of the Ingolstadt meeting.

Christian Bernreiter (51, CSU) Commissioner of the district Deggendorf and president of the Bavarian administrative districts legislature: “The situation is clear. We have reached our limit! We are not finding any more accommodations. We canvassed 35 properties and found nothing. We are throwing up our second temporary facility. It cannot come to forced institutionalization. At that point if not sooner, the mood in the population will shift. We absolutely need a limit.”

Rolnd Weigert (46, independent) Commissioner of administrative district Neuburg-Schrobenhausen: “The situation is difficult. We can’t handle the refugees anymore! We have leased about 30 decentralized facilities. There are no more. We are having to squeeze 188 refugees into a container town intended for 84 people! We are lining them up vertically. Soon we will have to start stacking them. The public’s acceptance is breaking down more and more. It can’t go on.”

Michael Fahlmüller (47, CSU) Commissioner of administrative district Rottal-Inn: “We are a border territory and — We are done! Acceptance of anymore refugees is not do-able.”

Heinrich Trapp (64, SPD) Commissioner of administrative district Dingolfing-Landau: “This onslaught is too much for us. We cannot take any more refugees.”

Willi Hogger (65, independent) Vice Commissioner of administrative district Dingolfing: “We can still take refugees, Every six or eight weeks, we have to take over another school gym, and naturally that causes problems. We need a limit.”