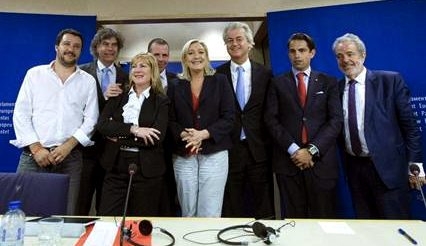 The EU-skeptical and immigration-critical parties have at last formed a bloc in the European Parliament. The group will be known as “Europe of Nations and Freedoms”. Among the participating parties are the Front National (France), the Party for Freedom (Partij voor de Vrijheid, PVV, The Netherlands), Vlaams Belang (Belgium), and the Northern League (Lega Nord, Italy).

In this video excerpt from RT, Marine Le Pen makes the announcement in French, and Geert Wilders speaks in English:

Below is the press release sent out today by the PVV:

The leader of the Party for Freedom and Dutch politician Geert Wilders has announced he has formed a political group in the European Parliament.

The anti-EU Europe of Nations and Freedoms bloc includes the Front National of Marine Le Pen. Forming the group will give the MEPs more influence in the parliament.

It will also mean that the new bloc’s members have access to millions of euros in extra funding as well as more staff and speaking time. To be valid, a group needs 25 MEPs from at least seven different nationalities.

Mr Wilder said that the formation was a “historic moment”.

“Today it’s the beginning of our liberation, our D-Day,” he told reporters, adding that the new bloc would be the voice of the new “European resistance”, defending their countries’ sovereignty. The anti-Islam leader said the bloc would fight mass immigration as well as “Islamisation”.

The following report is from the French edition of The Local:

A new grouping of European far-right parties, called Europe of Nations and Freedom, is to be formed around France’s National Front, the French party leader Marine Le Pen announced in a statement Monday.

The group will be officially introduced at a press conference in Brussels on Tuesday by Le Pen, who succeeded her father Jean-Marie Le Pen as head of the National Front (FN) in 2011.

Members of the European Parliament from other countries will also be joining the new political grouping, the FN statement added, without giving details.

Hat tip for The Local: Fjordman.

20 thoughts on ““The Beginning of Our Liberation, Our D-Day””