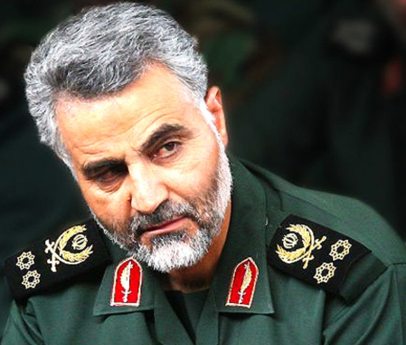 The Iraqi government’s military response to the Islamic State, meager though it has been so far, would have been even more feeble if it were not receiving major assistance from Iran.

What remains of the formerly independent state known as “Iraq” is a largely Shiite entity dependent on Iran for its security and well-being. The remainder of the country that the United States “liberated” from Saddam Hussein is divided into western and northern sections, the former controlled by Sunni tribes now mostly loyal to the Islamic State, and the later a de facto independent Kurdistan.

Qassam Soleimani is a major general in the Iranian army who manages Iran’s military adventures abroad. His job is to coordinate the actions of Iranian proxies such as Hezbollah in Lebanon and the Houthi in Yemen, and to liaise with client governments such as those in Damascus and Baghdad. His name has been in the headlines in the past few days as the military commander of the Iraqi offensive to retake Tikrit from the mujahideen of the Islamic State. In his role as Proconsul, Gen. Soleimani oversees the operations of both Shiite militias and units of the Iraqi army.

In the following clip from CNN Christopher Dickey discusses Qassam Soleimani’s role in Iraq and the Middle East:

Below are excerpts from an article on the same topic (using the variant spelling Qassem Suleimani) from the The Washington Post:

Qassem Suleimani, the Iranian general helping militias fight the Islamic State in Iraq, is known by many names.

He’s the “Shadow Commander,” according to a profile by the New Yorker’s Dexter Filkins. He’s the “Dark Knight,” according to a piece by Foreign Policy magazine. And he’s the Iranian regime’s “Mr. Fix-It,” according to the Weekly Standard, which threw in a comparison to the Most Interesting Man in the World from the Dos Equis beer commercials for good measure.

He’s also been designated a terrorist by the United States on more than one occasion, and accused of playing a leading role in arming Shiite militias in Iraq to attack and kill U.S. troops during the Iraq war. The general is also thought to be a fierce supporter of Syrian President Bashar al-Assad.

Therein lies both the mystique and notoriety of Suleimani. He has been the commander of the Iranian Revolutionary Guard’s Quds Force since the late 1990s, exerting a broad influence on the Middle East that has often been at odds with Washington’s vision for the region. But for most of that time, he has stayed in the shadows, leading an organization that is part Special Operations force, part paramilitary.

But photos of Suleimani have been appearing on social media frequently as Iranian-backed Shiite militias in Iraq launched an offensive this week to take back the city of Tikrit from the militants. It’s a strategically important area: Tikrit sits about 110 miles north of the Iraqi capital of Baghdad, and 130 miles south of Mosul, the city of more than 1 million that the Islamic State seized last June. The militants’ control of Tikrit solidifies their hold on Mosul, which has become their de facto capital in Iraq.

Suleimani’s star rose significantly during the Iran-Iraq war, which ran from 1980 to 1988 and killed hundreds of thousands of people. According to Filkins’ piece, Suleimani became a division commander in his 20s, and took over the Quds Force about a decade later.

Never has the Iranian spy commander received as much publicity as he has recently, however. The attention has highlighted the complexity of the Middle East once again: Washington is now watching as Suleimani guides an assault against militants whom both the United States and Iran are against, while not working with him directly. But it’s also casting a look wearily back at history, and the quiet shadow the general has cast for generations.