Below is the intervention read this morning by Maj. Stephen Coughlin, representing Mission Europa Netzwerk Karl Martell at the OSCE Human Dimension Implementation Meeting, Session 12: “Tolerance and non-discrimination II, including prevention and responses to hate crimes, aggressive nationalism and chauvinism”. 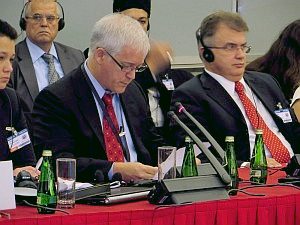 From the OSCE published document “Freedom of Expression and Hate Speech,” from the Mission to Skopje in December 2013, the following statement is made[1]:

“Freedom of opinion is an absolute civil right, meaning no-one can jeopardize or limit human thinking, whereas freedom of expression is treated as a political right.”

What is thought if it cannot be expressed? When the right to free expression is made conditional, a mockery is made of the “absolute civil right” of freedom of opinion. An artificial distinction designed to suppress expression is created — and through it, so is thought. We cannot allow narratives the power to reduce rights to meaninglessness.

Just outside this room, we then find OSCE publications with Orwellian titles like:

It is with great concern that these titles are associated with discussions on hate speech where “hate speech” lacks a coherent — reasonably concrete — definition.

When hate crimes lack definition, the state is given a powerful hand against its citizens (and dissent) to make arbitrary decisions as to what constitutes hate that will end up being what the state says it is. The powerful get to impose their will on weak.

Some of my European friends noted to me recently that Europe does not have a developed doctrine on the protection of free expression comparable to the American doctrine of “Prior Restraint” (or formal censorship before publication). From Black’s Law Dictionary:

“The legal doctrine of prior restraint (or formal censorship before publication) is probably the oldest form of press control. Certainly it is one of the most efficient, since one censor, working in the watershed, can create a drought of information and ideas long before they reach the fertile plane of people’s minds. In the United States, the doctrine of prior restraint has been firmly opposed by the First Amendment, and by the Supreme Court. But the philosophy behind that doctrine lives zestfully on, and shows no signs of infirmities of age.” Black’s Law Dictionary, 9th, Bryan A. Garner, Editor in Chief, West Publishing (Thomson Reuters), St. Paul, 1314; (citing David G. Clark & Earl R. Hutchinson, Mass Media and the Law 11, 1970)

This doctrine seems especially alive and well in this forum.

MISSION EUROPA recommends that heightened awareness to legal theories like “Prior Restraint” be developed and considered when assessing concepts that concern state action — including non-state actors acting under color of authority — when considering activities involving free expression.

It also recommends that distinctions between thought and expressions be considered suspect deserving strict scrutiny.

One thought on “Protection of Free Expression vs. “Prior Restraint””