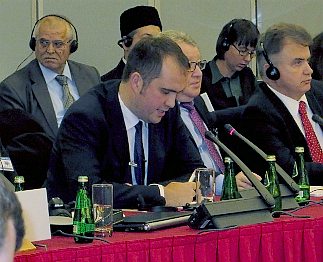 We in the International Civil Liberties Alliance agree that hatred can be dangerous and lead to serious crimes. As mentioned in the opening speech, today is the anniversary of the mass murder of many Jews at the Auschwitz death camp, undoubtedly a crime motivated by hatred propagated by Nazi Germany. However when terms such as hate crimes, and speech are poorly defined, there is a risk of malicious prosecutions and even cover-ups to shut down debate inconvenient for certain groups.

Lately, we have seen many examples of this — to cite just two, in Poland, the owner of a webpage, Damian Kowalski, was investigated by police over a supposed hate crime. His webpage, ndie.pl or “No to Islamisation of Europe” reported on cases of Islamic extremism in Western countries, often simply translating reports into Polish from mainstream Western media. The police justified their investigation, and confiscation of computer equipment, by saying the accused “incited to hatred of believers of Islam”, did not elaborate on where he had done this. Meanwhile in the UK city of Rotherham, a report found that 1400 underage girls were sexually abused and groomed for prostitution by gangs that were (more or less) unanimously acknowledged to be mainly Pakistani in origin. Such abuses were found to be covered up by police and child protect services, partly as the ethnic origin of gangs made this a sensitive issue. In other words — the need not to be even suspected of inciting hatred took precedence over physical protection of young vulnerable girls.

Such abuses can take place when terms such as hate speech are loosely defined — indeed, reasons such as fascism and hate speech have been used to crack down on inconvenient viewpoints, in this very part of Europe not so long ago.

ICLA recommends terms such as hate speech are clearly defined before being considered for implementation into domestic legal systems by participating states, and that the potential for related legislation to be abused to stifle democratic debate is recognised and taken into consideration.