Note: Since MC wrote this post, Hamas refused an Egyptian-brokered ceasefire and continued firing rockets from Gaza. Israeli air strikes have resumed. Also, the first direct Israeli death of the campaign occurred when a mortar shell killed a man at the Erez Crossing into Gaza. 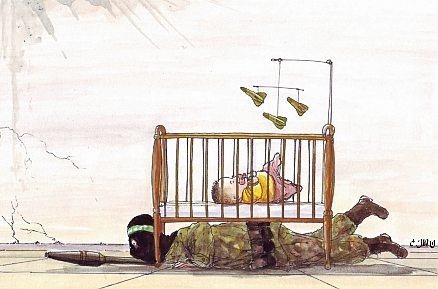 It is 10:00, and it is silent. Silence is always uncanny after the continuous noise. HOM has been giving away nappies (diapers), but mothers are asking for larger sizes because the older children are having ‘accidents’ when the guns go off. If the ceasefire holds, then we know to prepare for next time, this week, next week, sometime, always — to corrupt a children’s rhyme.

If Hamas do not keep the ceasefire, then it will be obvious to all but the most disconnected which is the terrorist group. But then we must also ask ourselves is this really about Israel, or is it about Jews?

Israel is the Jewish State, but not all Jews are Israeli. Yet to the mobs in Paris, and to the President of France and many others like him, this is not apparent. Such reasoning is over his political and intellectual horizons. France has a long and, it would seem, proud history of anti-Semitism, in common with other European states. We must assume that it is government policy in these places to make Jews feel uncomfortable. We must look at what they are doing, not what they are saying.

Israel has kept to international law. Gaza has committed a war crime every time a Hamas missile is launched targeting Israeli civilians. The number is now in the low thousands of missiles.

To me, this conflict is the continuation of the Nazi holocaust by proxies, complete with plausible deniability, and I challenge the European Elites to disprove it!

I hope that this is the last piece in this series, but I was wrong last time I tried to end it….

Its 11:00 and I am wrong again. The missiles are continuing unabated, but Israel has yet to retaliate. So who’s the aggressor? How are HuffPo, NYT, the BBC and the Guardian going to spin this one?

So who fired the missile?