Lutfur Rahman is the mayor of the culturally enriched borough of Tower Hamlets in East London. Mr. Rahman’s name has frequently been in the headlines recently, not least because of a dodgy deal in which a piece of borough-owned real estate was sold to his cronies for a rock-bottom price.

Our British correspondent JP takes a look at the context of Lutfur Rahman’s meteoric rise in the diversity-rich environment of Modern Multicultural London. 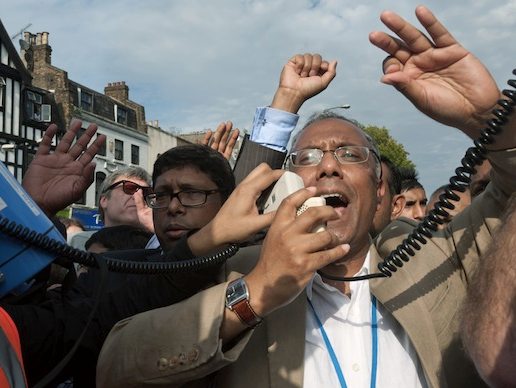 For the crime of giving humanity parliamentary democracy, night after night, latter-day gods bind London’s Tower Hamlets to a rock for fallen angel Lutfur Rahman to gorge himself silly on a young civilization’s liver while applauded by a chorus of blind and ecstatic cultural diversificationists. Thus do the gods wantonly sport with our venerable heritage?

A recent report in a national newspaper once again brought to light one of Rahman’s artful dodges, this time the sale of Old Poplar Town Hall at a knockdown price to his business associates and electoral advisors. The report concluded with the dismal conjecture that there was no little or no prospect of bringing Rahman to account for fear of being labelled race-mongers. Unseemingly, London’s authorities have given this latter-day Artful Dodger carte blanche to fleece its pockets, not only for his own benefit, but also — and this is what lifts the story from the mundane to the alarming— for his corrupt religion, Islam.

In an endless merry-go-round of easy cash for worthless causes, Rahman is as scrupulous at glad-handing his campaign coffers as he is massaging useful multiculturalists. The latter, blinded by the untested benefits of cross-cultural pollination, stumble when it comes to recognition of the inevitable ambient cultural disharmony produced by the elevation of an Islamic Overlord to a position entailing civic responsibility and impartiality.

Tower Hamlets First is the name given to Rahman’s new party, a ticket on which he hopes to gain re-election as its Mayor later this year. Less than a megaparsec away from full-on Sharia implementation in this sorry hamlet, it is not difficult to decipher the message in this seemingly innocent and banal campaign slogan. Yes, we the British taxpayers will pay through our noses as well as being led by them, for Tower Hamlets to be London’s first officially-sanctioned Sharia borough. Others will no doubt follow, keen to emulate this easy glide into peaceful and munificent conquest.

Signs of peaceful conquest abound in the borough, from recent demonstrations in Brick Lane calling for the prohibition of the sale of alcohol, to hate sermons at East London Mosque, to other activities hazardous to ordinary citizens of the UK — the Islamic killing machine otherwise known as Sharia is the ever-looming shadow which gives these events meaning in the here and now. The indolent tameness of the conquest in its initial stages belies the excessive severity that will undoubtedly be its fruit.

Recent articles and blog posts on events in the London borough of Tower Hamlets: