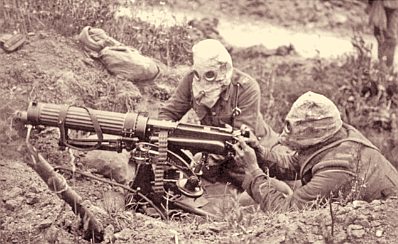 Today is Day Seven of this Fundraiser. We have rounded the last turn and are heading for the finish…

See those fellows with the gas masks? Some of y’all may need them to get through this post, because some of y’all may find my views offensive. This time my opinions could even start one of those comment thread wars. I hope not. I hope instead that if the issue of religious faith is not your bag, you’ll be a grown-up, send a Gallic shrug in my general direction, and scroll on down the page. Maybe read the news or look at a few comments.

It’s Saturday evening now. The Baron is tired after a long day’s labor at the computer. I’m finishing up the emails that have come into our webmail server and the B is in the kitchen, cleaning up from supper. We had ham and roasted fennel, the latter being one of my favorite vegetables.

He wanted to do the dishes in hopes that the routine would allow his mind to come to rest on some part of this Fundraiser’s theme — “putting our heads over the parapet”, i.e., raising our heads up to look around and risking getting shot at. Actually, it’s not just a ‘risk’ anymore; the potshots have long been an ugly fact of life here at Schloss Bodissey.

Just for openers, the OIC has complained more than once in its annual report about us. Think of that curiosity: obscure little ol’ Gates of Vienna regularly gets the OIC’s shorts in a twist. Given the paranoid aromas arising from their reports and the picayune nature of their complaints, I intuit that it’s our name which causes anxiety.

The West has long since forgotten Islam’s ignominious defeat at those city gates in 1683, but you can bet your Koran that those folks who run the OIC continue to burn with shame at the searing memory of their defeat. It was a sure sign of Allah’s displeasure that the infidels prevailed against the awe-inspiring numbers of Allah’s warriors arrayed against them. The Christian victors thought it was a miracle. They were so overjoyed that — being Viennese after all — they created a wonderful pastry: a Viennese crescent. Sly humor on the part of the city’s famed bakers, eh?

So, while the Baron is out there rattling them pots and pans, I opened an email to read before it gets taken in tonight. I try to get to them all but don’t always make it. This one is a response from a donor in Minnesota. The Baron had thanked him, and as people often do, he said something in return.

For those of our readers who believe in God the email will have meaning. For those of you who are atheists, the email may be a turn-off, though I know at least one of our atheist readers who is so secure in his beliefs about these matters that he is quite enthusiastic about the subject. Would that his reaction were the more common one…

Ah, well, c’est la guerre, guys. We believers are thick on the ground in this God-ridden country. Can’t take a step without falling over one of us. I was going to say, especially out here in the country, but really, we’re everywhere. It was a cause of wonder to de Tocqueville when he visited us, and it’s been a continuing cause for ummm…concern for other European visitors. The godless Russians? Not so much.

In order to give the Baron a badly needed break, this Fundraising post will be a thank you note from one of our faithful donors, who sets out to explain what he gets back in return for his donation. His epistle from Minnesota:

You are more welcome than I think you can know, Baron & Dymphna.

I marked my gift as support rather than a donation in response to the intended attack from Norway you wrote about. I do not think what you do is begging, though I do not presume to tell you what to call it. I think you are asking us to do our part, to not be freeloaders at your table day in and day out. You serve us wonderful, nutritious food; we need to contribute our fair share. Leaving it to us to decide how much to contribute is a courageous, generous, and in some sense profoundly Christian thing to do.

Baron, your eye condition has made me feel like crying in grief for what you are dealing with. I’m very glad for your good prognosis with this treatment. I am praying for you.

In case this information can ever be of use to you, please know that I have personally experienced rather dramatic, medically inexplicable healing through prayer, and have first-hand witness of more such healings from family members and others whose testimony I have good reason to trust. I know from first-hand experience that healing prayer does not often bring such results.

This will be voodoo for our more sensitive non-believers. For some reason this kind of talk sends them fleeing from the room. But for those who’ve had similar experiences, this fellow is simply repeating what they’ve learned firsthand.

He goes on to say:

But the fact that it does at times bring such results, and that there are people for whom such results happen much more than for most others, is overlooked or denied so often, and I have had such life-changing benefits from it, that I would have a hard time living with my conscience if I did not bear witness to you about it.

I am very impressed by you two, and very appreciative of you. I’m a normal person with long-term illness and deep wounds from childhood, but my healing has so far been far beyond normal, but only in response to long-term seeking in stubborn faith.

There seem to be some people who are more gifted in this prayer, or perhaps have more development of their gifts, than others. I hope I am or can become one of them, but aside from that I can give you contact information for some if you ever want it.

You two are making a wonderful contribution to the world, as far as I can tell. You certainly have touched my life and continue to do so in a wonderful way. May God continue to bless you, heal you, protect you, and guide you.

With gratitude and affection, and an ongoing mild irritation that I seem to be still the only person from Minnesota contributing to this great web site,

So there you have one person’s validation for our work. And it’s a meaningful one for me. Our religious faith is not something we talk about much, though we presume our readers are aware that we’re Christians. And many readers besides DL have taken the time to send similar expressions of hope and prayer our way. They have done much to buoy both of us. In fact, I’m quite sure I wouldn’t be writing this now were it not for the many similar letters from other readers.

As I’ve said to many of you personally, gifts come in many guises: money, time, talents, resources. And as I’ve also said, in the Boomerang Theory of Giving, whatever you send out is returned to you many times over. This is an inviolable law but a subtle one. The Cosmos gives back to you what you need. It often bears no resemblance to what you gave, but it is deftly balanced to fit you. Sometimes those gifts require a sense of discernment — and a sense of humor.

It was a quiet giving day. The following places are inhabited by some of our donors:

Near Abroad: No one!

May you all be blessed for your generosity, in whatever form is most appropriate.

7 thoughts on “Taking a Chance”