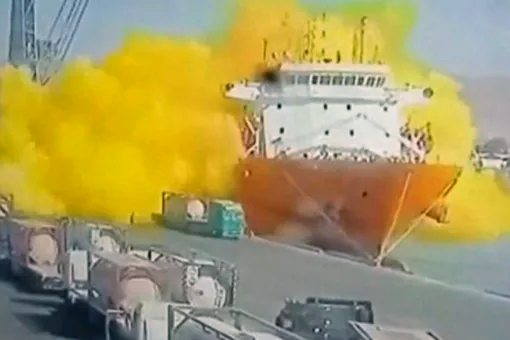 Here’s an update on yesterday’s post about the deadly explosion of toxic gas at the port in Aqaba. According to today’s news, the death toll has risen to twelve (some accounts say thirteen), with more than 250 people injured.

The toxic material is now specifically named as “chlorine gas”. Elemental chlorine gas is pale yellow-green when isolated, whereas mustard gas (which contains chlorine) is generally described as yellow-brown in appearance. Photos of the latter strongly resemble yesterday’s plume of vapor in Aqaba.

It’s possible that the chlorine gas in the tank was compounded with other elements to make it that color. I don’t know whether such compounding might be done with the express purpose of making the gas clearly visible during accidents such as the one in Jordan.

The container is said to have been destined for Djibouti, which is just down the Red Sea from Aqaba, on the African coast.

The whole story still seems strange to me, but I doubt we’ll ever learn any more than this.

Below are excerpts from a recent Reuters report on the incident:

The leak came after a tank filled with chlorine gas being exported to Djibouti fell while being transported, officials said.

At least 12 people died and 251 were injured in a chlorine gas leak from a storage tank at Jordan’s Aqaba port, officials and state media reported on Monday.

A video posted on state television’s Twitter page showed a storage tank falling from a winch and slamming into the deck of a ship, followed by yellow-coloured gas rising into the air as people ran away.

Health ministry officials said they expected only a handful of people to remain hospitalised by Tuesday.

Chlorine is a widely used disinfectant and water purification agent, but if inhaled, the gas turns to hydrochloric acid, which can lead to internal burning and drowning through a reactionary release of water in the lungs.