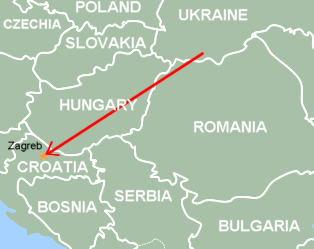 Late Thursday night an old Soviet-era surveillance drone crashed in Zagreb, the capital of Croatia. Fortunately for the residents of Zagreb, the aircraft landed in an uninhabited area, and no one was injured. It did not appear that the city had been deliberately targeted.

It has been suggested that the drone was launched by the Ukrainian military, which has been known to employ old Soviet drones. However, the Ukrainians deny all involvement.

The following video report from Croatia discusses the mysterious Soviet drone. Vortac, who translated the text for subtitles, includes the following analysis and proposes a likely explanation for the appearance of the drone in Croatian airspace:

The drone hit in the middle of the night, so surveillance cameras only recorded a very brief flash and nothing else. Of course, local newspapers have visited the crash site and filmed the crater with some commentary, but with very few insights. Even the crater looks fortunately unremarkable since the drone apparently carried no warhead and the damage it made was likely from its kinetic impact only.

My opinion is that the Russian army launched the drone as a false flag operation in an attempt to put some blame on the Ukrainians, to gather some intelligence, and to roughly target the Croatian capital. The drone flew over Ukraine, Romania, Hungary and Croatia, testing the reaction capabilities of Ukraine and three NATO countries, and that’s by far the most convenient route for Russians, since it maximizes the amount of gathered intelligence, and since it was probably too risky to launch it over the Baltic countries or Poland (where anti-Russian sentiments are much higher).

That kind of obsolete equipment probably doesn’t have any GPS or remote guidance capabilities, so if the Ukrainians launched it towards Russia or Crimea, it’s very difficult to explain how it made the 180° turn and finished over southeast Europe, even in error. Therefore, the route was probably predetermined, and only the Russian army would find such a route/operation tactically useful.

Here’s what the BBC said about the incident:

People in Croatia’s capital Zagreb were rudely awakened to Russia’s war in Ukraine when a military drone crashed in the city late last night [Thursday March 10].

There was an explosion in the southwestern Jarun district shortly after 23:00 (22:00 GMT). Residents found a crater and wreckage scattered close to student accommodation.

Croatia’s president said there was no sign the country had been targeted.

Witness reports suggested the only person hurt was a man who fell off his bicycle as the drone hit the ground.

Markings on the debris included Cyrillic lettering and a five-pointed star. Local experts said these suggested that the drone was a Soviet-era TU-141 reconnaissance aircraft.

Despite the drone’s vintage, it has been deployed by the Ukrainian military both in 2014 and during the current conflict.

Croatian media have been speculating about its origin. Although Ukraine’s embassy in Zagreb declined to comment, an adviser to Ukraine’s defence ministry was adamant the drone was not Ukrainian and did not have Ukrainian markings.

2 thoughts on “The Droning of Croatia”