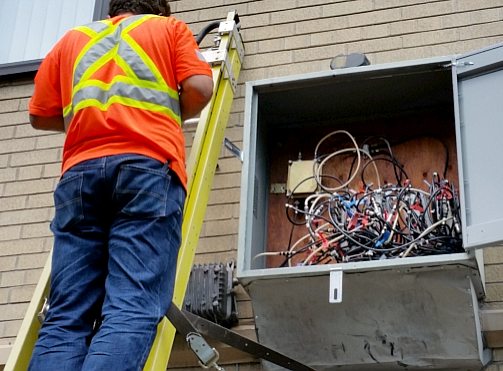 Our internet connection failed sometime Saturday night. It was the culmination of a week-long community event, with lashings of rain turning this plateau into a swamp.

All that water eventually moved down toward the river, leaving behind drowned server boxes (or whatever they’re called, those boxes dotting the landscape here and there, some of which can be seen from the road). Whatever genius designed this beta model of internet via phone lines planted those boxes smack dab on the ground, thus ensuring heavy rain would drown them. At least that’s what we suspect.

So we can keep our phone service during heavy rains… but the internet goes down in the deluge.

“How much water?” you ask. About five inches in the course of two days or so. But before that, it had been raining steadily for a week so; by Friday the runoff was impeded by the previous soaking. That box just drowned for a while.

[Due to some other glitch, we were without phone service for five days last week…yes, we’re a captive audience out here, ain’t no competition to improve this system. Satellite internet is too unreliable and expensive. The electric cooperative is working on a version that would come through their wires, but what with lines failing due to snow accumulation or trees falling on them, they go out of service right much during the winter, so probably not.]

We did try to have someone log on here and leave a notice, but our proxy firewall prevented their access. And also prevented the bad guys from using us for target practice while we were outside in our wellies, measuring the rainfall.

Anyway, we’re baaack! The sun is shining as though that grey wet week never happened.

Thanks for your patience, dear readers.

8 thoughts on “We’re Not Dead, Just Doing the Backstroke…”