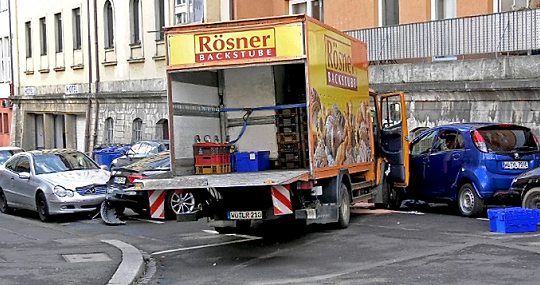 Your ordinary Wednesday in Germany. An original translation from Merkur:

Würzburg — A suspected mentally ill man raced through Würzburg with a stolen small truck, injuring four. The 35-year-old hijacked the delivery truck of a bakery on Wednesday before noon, and took off with an employee of the bakery in the rear, police announce. At high speed, the German sped away, rammed an oncoming car and several parked cars before the truck got wedged. After the 35-year-old exited the driver’s compartment, he pushed a motorcycle rider from his bike, and finally wounded himself. Four passers-by overpowered the man until police arrested him.

The employee of the bakery, the driver of the oncoming car, the motorcyclist, and one of the passers-by were injured, according to police. At least eleven cars were damaged by the man on his run. He was taken to hospital.

4 thoughts on “Loony Hijacks Truck, Goes on Rampage in Würzburg”