Note: In the schematic diagram and map below, orange represents the seats and districts won by Fidesz-KDNP. 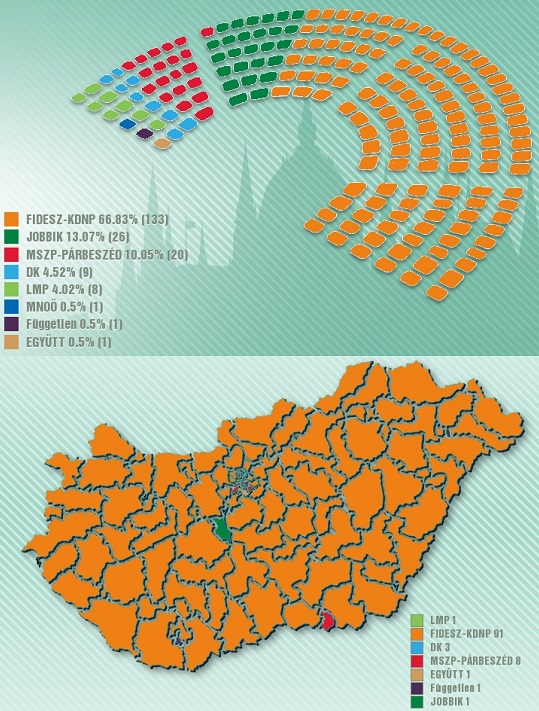 Right now, just hours after the polls closed (with about 70-80% of the votes processed), Viktor Orbán’s party, the Fidesz-KDNP, won more than 40 percent of the seats in the parliament, which at this moment is projected to translate into at least 133 seats in the final tally. That’s a 2/3 majority, and will give Fidesz the ability to change the Basic Law (Constitution) itself. This could help in the resistance against the EU, because their basic treaty specifies that they cannot do anything against it. If this holds, then we can say Viktor Orbán got the ultimate permission from the people of Hungary. It was a record turnout: 68.13%, the highest for decades.

The only shameful spot is Budapest, where the opposition’s strongest spots are clearly visible.

Note: I always knew there was a reason why Communists and Globalists are trying to push the population into crowded cities. Once there, most of them lose their wholesome system of values and become an easily manipulable mob. For me, this result is a clear proof of that.

Now the process will continue till morning, when more complete results will be published. The counting process will be finished in a couple of weeks.

As my Dad was part of one of the local voting committees, I can describe the process of how the counting occurs (to avoid claims that “the Russians hacked it”):

Voting is done on paper. One piece of paper is for the individual candidate, another for the parties.

The people make their Xs on two spots, which constitute a valid vote. After the voting place closes, the committee, which is composed of representatives of all the interested parties, will start counting. They count the votes multiple times, at least twice, by different people. Once the results are reliably achieved, they create an official record of it and report it to the central office in Budapest. All votes are preserved, and in another book, each citizen’s signature, too. Electronic calculations are made in Budapest, but manual calculations of the results are made as well, and compared to the electronic results. (That’s why it is a slower process than a full electronic one, but it is not possible to hack it.)

7 thoughts on “Hungary Votes for Fidesz”