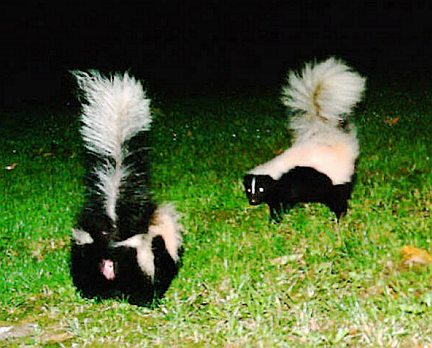 Peace reigns once more at Schloss Bodissey. But it sure took a pile o’ money to secure the borders and enforce The Peace.

Our readers may remember that our crawl space was breached by various wild critters. It could have been worse — at least our invaders were small. They also simply holed up for a bit, rather than hibernated.

We posted about all this foofaraw last November, as you may recall. That was when we became aware of the extent and seriousness of our skunk problem.

This mess began earlier than we knew: a woodchuck (a.k.a. groundhog, and known in the local dialect as a “whistle pig”) dug the hole under the footer, running from under the side porch into the crawl space. Had a skunk not come in through the hole made by the woodchuck, we might have gone on for quite a while without knowing about that hole underneath the foundation. But once the skunk joined the party and started feeling a little anxious, the upper part of the house began to fill with noxious fumes.

The B was upstairs in his office when the odor hit, while I was directly above the skunk spray. Suddenly awakened from a sound sleep, my first incoherent thought was that there was a fire in the kitchen, that somehow rotten garlic bulbs, dirty gym socks, and coffee grounds were blazing away on the gas range. But the kitchen was quiet and empty. Evidently the smell had yet to make its way to the stairs leading to the B’s study, so I did what I customarily do in such situations: I went to the bottom of his stairs and yelled “Nnneeeddd!”, which always sends him hurtling down the steps. At that moment he could smell it he identified it: skunks in the crawl space.

Our question at that point was whether the skunk’s residence was temporary, or whether this was momma skunk who had a den of babies to care for under our house. The second question was how to make sure she left and didn’t return.

So began our saga of animal-proofing our underneath. We called an exterminator, but found out he only did post-damage clean-up; the fellows who could capture whatever was under there had to be registered. Wouldn’t you know it: another government regulation! But he referred us to the man who came out to make sure he captured any stray wildlife under our house. If it was a momma, he had a trap. And if there were babies, he’d be going in to get them. He and his mean came and set up the trap, showing the Baron how to check it, and also came by every morning to check the trap themselves.

The skunk must have lit out for Dodge that first night, because the only critter he caught was a feral cat, one so hungry it ate the whole peanut butter sandwich in the trap — three or four nights in a row. The final trap — a “cage trap” — caught the poor creature. That morning the man opened the trap door and the feline made a beeline for our woods.

Thus concluded the job of the skunk-trappers. Enter the Crawl Space Wizard.

The contractor we had called first returned to the scene of the crime. He and his crew inspected the area underneath the house and declared it empty, though they said the woodchuck hole had been there under the steps for a good while, since there was much evident damage to insulation and our HVAC ductwork. The latter had been torn in various places. Plus a lot of urine and feces — but the less said about that, the better.

The contractor, who specializes in sealing crawl spaces, suggested that we opt for a full encapsulation. That meant:

We signed the contract. Work got underway in mid-January. During the worst weather of the year, which delayed everything.

Then, when they got to the front part of the house, they discovered that the part that had been jacked up 25 years ago needed to be jacked up again — the old cinderblocks had settled into the dirt, and in some places they no longer made contact with the joist they ostensibly supported. So we had to agree to an amendment, which meant additional expense.

However, as you can see from the photos below, the final result (completed in late February) sure was worth it: 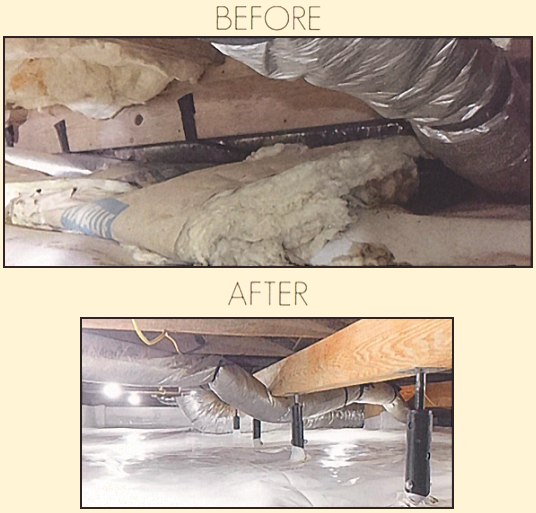 In the “after” photo you can see the new permanent jacks they put in to support the new, more robust joist. Those jacks are set on concrete pads, but if they ever settle, they can be adjusted upwards, as required.

There is a climate-control sensor down there, and it communicates with both a monitor upstairs, and with our wifi. It notifies the contractor over the Internet if the temperature or humidity falls outside the prescribed range, and then he calls us up. In other words, if we have another one of those ghastly plumbing leaks, the crawl space man will know it before we do.

And, yes, the job cost us a lot of money. But one of the reasons I needed to tell y’all about this is that we were able to cover the expense — just barely — with the proceeds of our Early Winter Fundraiser back in December.

We’ll be holding the Spring Fundraiser shortly, and I just want to let everybody know that the problem we talked about last quarter has been taken care of. No more skunk stench — in fact, the house smells better all around, because no other nasty vapors waft up from underneath. And the new insulation is a better design than the old stuff, so that our electricity bills have dropped.

The only downside is that there’s a homeless skunk out there in the woods somewhere, crying about the wonderful warm hidey-hole she used to have.

Well, tough! She’ll just have to deal with it.

22 thoughts on “The Planet of the Skunks”