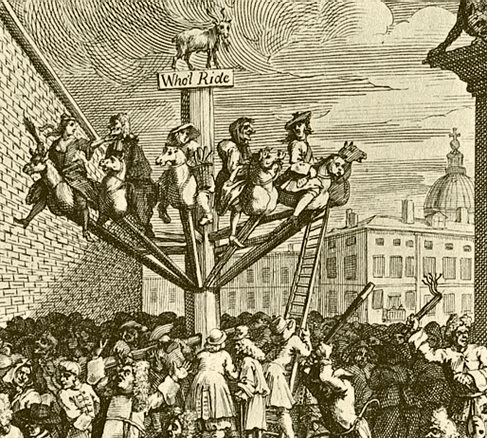 Many thanks to JLH for translating this op-ed from the Neue Zürcher Zeitung:

The barbarians are among us. They are not lurking on the right or lower edges of society, they are not among the uneducated or the educationally failed, they do not come from under-developed regions. They are sitting at the levers of influence in art and science, they write in quality publications, discuss at universities, manage art galleries, dominate the talk shows. Nonetheless, they are barbarians, for in their innermost being, they despise art.

Under the pretext of fighting sexism and racism, they whitewash poems, make pictures disappear from museums, re-touch films, boycott concerts. Replete with the idea that subjective shock and politically correct thinking make anything permissible, they are instituting cleansing actions intended to free the world of all esthetic double meanings, provocations, disturbances and asymmetries of appetite.

Faulty reasoning that would not be countenanced in a pro-seminar now belongs — in the truest sense of the word — to high fashion. For instance, the confusion of a work’s validity and its genesis. It seems to be a given, according to present-day standards, that a work of art must do penance because its creator led a perhaps not entirely blameless life. On the other hand, no artist can be so above reproach that he cannot be suspected of offending someone with his work. Forgotten or demonstratively ignored is the fact that historical context can also play a role in the judgment of art; that profound knowledge could protect against intuiting sexism behind every instance of female nudity.

Of course, none of the new enemies of art wants to censor ideas, works or thoughts. A 19th-century painting of a mythological scene in which wanton nymphs entice a young man to his doom is only taken down for the purpose of — as it is so prettily phrased — provoking a discussion. Someone here has basically misunderstood something. If I want to discuss a work of art and its ambivalence — even discuss its darker side — I have be able to see it, experience it, study it. Taking this one step further might be making judgments only about texts you have not read. But what is the next step here? Shared — or feigned — understanding for the activities of the new barbarians, even in the most sophisticated feuilletons, is not so much evidence of a deliberative analysis as the expression of a deep-seated pusillanimity. Hardly anyone wants to openly defend art which may arbitrarily be suspect of sexist, misogynist or racist attributes. That the quality of a work of art is not programmatic, and that works of art are also valued because the contradiction of form and content, makes possible an oscillation between affirmation and criticism — this concept is not only too complex a thought for the simplistic moralism of our time, but is also apparently no longer a viable means of esthetic perception for many people.

Behind the criticism of allegedly morally dubious art is concealed, among other things, a true hostility to art, the hatred of what is beautiful, which derives from categorizing and arranging. The new enemies of art would like to live in a world in which everything is unambiguous, idyllic, clean, spotless, contractually regulated, monotone and irritation-free. There are respectable barbarians at work here, compared to whom the petit bourgeoisie of the Biedermeier[1] era were esthetically open rebels.

Konrad Paul Liessmann, of the University of Vienna, is professor for methods of communicating philosophy and ethics. There is no question that is alien to his columns.