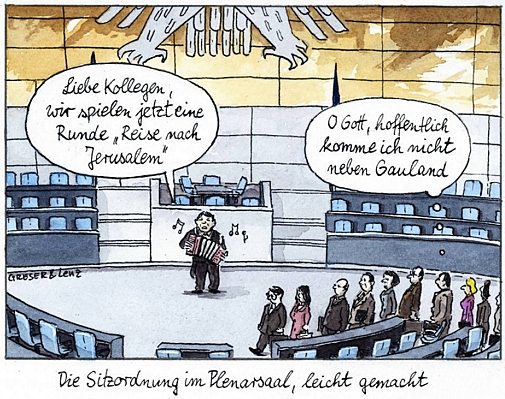 Caption: Seating order in the chamber made easy

Singer: Now, dear colleagues, a round of musical chairs.

Thought Balloon: Oh, God, I hope I don’t end up next to Gauland.

This past week marked an historic moment in Germany: representatives of the AfD (Alternative für Deutschland, Alternative for Germany) have taken their seats in the Bundestag for the first time.

Below is an interesting look at the dynamics and strategies of the AfD’s first day in the Bundestag. Many thanks to JLH for translating this article from Die Zeit:

First Session of the Bundestag

It Won’t Be Boring

(A turbulent Bundestag: Merkel confronts Gauland, the SPD tries out being the opposition, the AfD shows it is a protest movement. And a Holocaust survivor sits silently on the dais.)

Exactly a month after the Alternative for Germany [AfD, Alternative für Deutschland] turned from candidates into representatives, the caucus met in the plenary chamber for the first time. Seen from the government seats, their seats are at the far right. The 92 representatives stand in front of their blue seats, happily shake hands with each other and take photos. Caucus leader Alice Weidel enters wearing light-colored slacks and a dark blue sport coat, a file folder held lightly under one arm. In the next seat her co-leader, Alexander Gauland, wears his customary beige tweed jacket.

It is quite different from 1983, when the Greens first entered the Bundestag in gym shoes, with flowers in their hair. The AfD, which sees itself as a middle-class party, is not visually striking. The only thing that stands out is the consciously traditional dirndl worn for this special day by a young female AfD representative. Blue, of course — the party color. 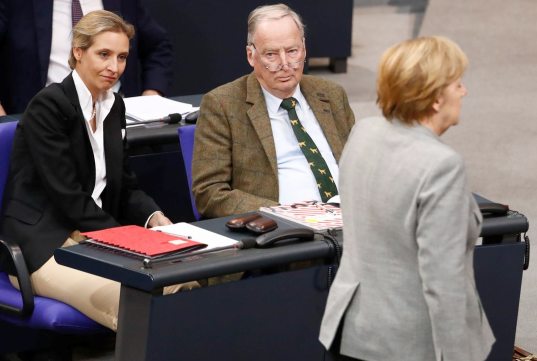 Then the chancellor makes her entrance. The cameras whir, Angela Merkel takes the same route as always, through the rear-right entrance, right next to the government seats. This position has long belonged to the Union (CDU-CSU), but is now the place for the AfD.

How Does Merkel Deal With Gauland?

So Merkel, whom AfD supporters call a “traitor to the people” and whose removal the party campaign posters called for, walks by the new representatives. Gauland, whose row of seats is directly opposite Merkel’s government table, stands, and ostentatiously seeks eye contact.[1] Ultimately, the old-new chancellor nods courteously in his direction. It makes no difference.

Later, when the session has begun, Alterspräsident [temporary president by virtue of being the oldest member] Hermann Otto Solms of the FDP will say that he wishes no stigmatizing of the new representatives: “We all have the same mandate, the same rights and the same duties.” Parliament must reflect the diversity of opinion in Germany, and can thus “prove that our democracy is capable of integration.” The AfD claps especially loudly, as does the FDP. Other representatives aren’t sure whether they should join the applause, but do it anyway. Because Solms is right. Still, it seems strange that he was the one who said it.

Because without a short-sighted rule change by the Grand Coalition at the end of the previous legislative period, Solms would not have opened this session. It would have been Wilhelm von Gottberg. At 77, the AfD politician is the oldest representative in the Bundestag, but the government wanted to prevent him from being Alterspräsident. So Solms, as the oldest in service with 33 years in the legislative body, is the first speaker.

The AfD representative Bernd Baumann inveighs against this “transparent maneuver” in his first Bundestag speech. The tradition of the oldest member being the Alterspräsident, he says, has been broken only twice since the German parliament began in 1848. The last time was in 1933 by none other than Nazi Reichstag[2] President Hermann Göring. In his following speech, Marco Buschmann, parliamentary leader of the FDP, calls it “tasteless’ to equate the AfD — of all people — with the victims of the NSDAP.

Meanwhile, on the visitors’ platform, Inge Deutschkron, a Holocaust survivor from Berlin, sits silent. The 95-year-old is wearing a flowered dress, her legs planted firmly on the floor. At least that is how it looks from a distance. The AfD representatives are seated beneath her platform. In a sense, she is hovering over them. What does she — who had warned during the election against the “Sound of the 1920s and 1930s” in Germany — think of such initial verbal skirmishes?

The AfD Remains True to Itself as a Protest Movement

In their first appearance as a parliamentary party, the AfD remains true to itself as a protest movement. At the beginning of the session, their proposal to replace Solms by another group leader is dealt with. A majority of all other parties rejects that. The reaction of the 92 AfD members is to vote unanimously against all proposals of all other parties. And when Alterspräsident Solms thanks former Federal President Norbert Lammert, the new representatives ostentatiously do not applaud.

Not Even for Schäuble is There Applause

Even for Wolfgang Schäuble, elected new president of the Bundestag by 501 of 704 votes, there is at first no applause. Only the leaders, Weidel and Garland rise, go to Schäuble and dutifully shake his hand.

Once in 2016, Schäuble described the AfD as “evil demagogues” appealing to “baser instincts.” On Tuesday, he nonetheless offers his new parliamentary colleagues his hand. If they maintain the basic rules of discussion, he says, the parliament could absolutely be the place where social realities and conflicts were negotiated. Even the AfD applauds Schäuble’s insistence that “tones of disparagement” should have no place in parliament.

As expected, the choice of Albrecht Glaser as candidate for Vice President of the Bundestag is the cause of irritation. In all three votes, the AfD candidate fails [to gain a qualifying number of votes] — probably due to his positions on Islam. Many representatives understood Glaser’s previous statements to mean that he denies Muslims freedom of religion.[3]

The SPD Acts the Hardcore Opposition

While the AfD treats the Bundestag like a strange land, and the other parties do, too, to some extent, the FDP parliamentarians are “old souls” here. They are visibly happy to be back after four years as out-of-parliament opposition. The new Liberal representatives also seem to be in the routine from the start. Wolfgang Kubicki (FDP) chats self-consciously with Claudia Roth (Green), as if there had always been a Jamaica alliance.[4]

On the other hand, the SPD, whose seating has shifted left, acts the part of the two-fisted opposition. Already in his first speech their parliamentary leader, Carsten Schneider, repeats the complaint about the election: Merkel’s refusal of debates had strengthened the AfD.

Frauke Petry is here too — almost unrecognizable. The party-less representative sits far behind her former party friends, in the twelfth row, with the second AfD breakaway, Mario Mieruch and does not participate in any votes. Now and then, she cranes her neck to find out what is happening up front.

The government bench is empty this Tuesday. For the moment, there is just a managerial government. Soon, politicians of the Union, the FDP and the Greens could be taking their seats here. They have already been voting together on individual motions. “There was always change,” says Wolfgang Schäuble, who actually would like to remain as Finance Minister. Now he is enjoying his new task.

The first session shows that it will not be boring for him.

5 thoughts on “Politics in Germany: It Won’t Be Boring”