Early this morning a horrific fire occurred in the 24-story Grenfell Tower, a block of flats on the North Kensington, London (see this news report for details). Our English correspondent Seneca III has some pertinent questions about the obvious flammability of a building that was so recently and so expensively refurbished. 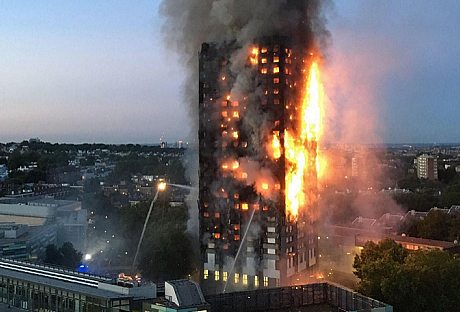 There was recently a £10 million refurbishment of the Grenfell Tower building. As always, the first step must be to follow the money in order to find the underlying cause of this Third-World type of tragedy in what was once the capital city of a First-World country.

Suspecting how things may work in Londonistan these days, we need to initiate a process of elimination by demanding immediate and precise answers to some obvious questions.

Final Question: Will we ever get to know the answers to these questions, even if they are asked, or will any enquiry be conducted secretly and kicked into the long grass if the answer(s) don’t fit the current ideological thrust of the governing classes?

Well, it will probably be the latter, and I suspect it will be a leg-dragging case of Boards of Enquiry or similar, habituated by the usual collection of useful drones who will obfuscate, dither, dissemble and wait for the incident to fade into the distant past in the hope it will be forgotten about.