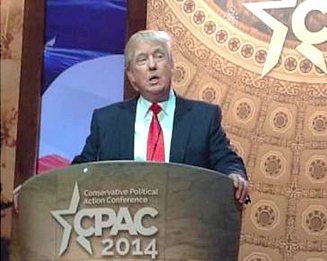 The title of this post is a quote from Donald Trump. He was talking to the Republican candidates at the 2014 CPAC event last year. Below is a succinct explanation of this “CPAC” group — what it is and who runs it and why those who want to discuss immigration are barred from speaking there, or choose voluntarily to stay away because they know who runs the show.

Ann Corcoran is deeply knowledgeable about immigration issues in America; that well of knowledge allows her to be succinct to the point of distillation. As with many aspects of immigration in the U.S., why bother crushing the grapes yourself when Refugee Resettlement Watch has already done the work?

Here she explains why Donald Trump is a lightning rod. I hope the ‘insider baseball’ references to CPAC, etc., will be understandable in context:

CPAC 2014: Trump was out in front (virtually alone) on immigration issue

For the record, we have written often on CPAC, but will not attend primarily because CPAC ‘leaders’ including Grover Norquist have worked hard for many years to keep discussions on immigration to a minimum and have outright banned those who want to discuss the Islamist threat to America.

Go here for our archive of posts on Grover Norquist. By the way, while pushing his amnesty agenda, Norquist worked very closely with the office of Senator Marco Rubio in helping craft that now discredited ‘Gang of Eight’ amnesty bill, but I’m digressing.

Here is a piece written by Jon Feere at the Center for Immigration Studies(tweeted by Ann Coulter yesterday) which chronicles how Trump was alone among a list of Republican leaders and Presidential wannabes in addressing immigration.

Trump was talking about our borders, our sovereignty and the future of the Republican Party long before he decided to jump into the Presidential race, and he must have been very unpopular (with the ‘leaders’ at CPAC) with this message!

From Feere at CIS (emphasis below is mine — ANN):

Nearly every speaker at the first day of the annual Conservative Political Action Conference (CPAC) avoided any discussion of immigration or amnesty, a sign that Republican politicians are starting to understand that conservative voters have very little interest in doubling legal immigration and amnestying illegal aliens.

Of all speakers, which included Sen. Ted Cruz (R-Texas), Rep. Paul Ryan (R-Wis.), Sen. Mitch McConnell (R-Ky.), Sen. Marco Rubio (R-Fla.), and governors Chris Christie and Bobby Jindal, only one speaker spent any time on immigration policy: Donald Trump. He came out strong on sovereignty and garnered strong applause for noting “we’re either a country, or we’re not; we either have borders or we don’t.” Trump also noted that amnesty is a benefit for the Democratic Party, while calling out Rubio:

“When you let the 11 million — which will grow to 30 million people — in, I don’t care who stands up, whether it’s Marco Rubio, and talks about letting everybody in, you won’t get one vote. Every one of those votes goes to the Democrats. You have to do what’s right; it’s not about the votes necessarily. But of those 11 million potential voters which will go to 30 million in a not too long future, you will not get any of those votes no matter what you do, no matter how nice you are, no matter how soft you are, no matter how many times you say ‘rip down the fence and let everybody in’ you’re not going to get the votes. So with immigration, you better be smart and you better be tough, and they’re taking your jobs, and you better be careful. You better be careful.

Any questions? Just put them in the comments. And yes, Mr. Trump is a bit of a loose cannon. He’s been an American feature for many years, mostly famous for being rich and for being eccentric — the two often go together.

But make no mistake about the attacks on him: when everyone else refuses to acknowledge the presence of the elephant in the room, and you have the courage not only to notice but to point at it, ‘they’ will come after you.

Afterword from the Baron (who formatted this for posting)

I find Donald Trump to be somewhat of a buffoon, based on various things he’s said in public over the past twenty-five years or so. However, the Republican establishment HATES him (and obviously now fears him as well), and that makes my heart warm to him. Anyone whom Jeb Bush, Reince Priebus, and the RNC want to destroy can’t be all bad.

I had thought this endless election season, with its 4,221 Republican presidential candidates, would be excruciating, something to be avoided as much as possible. But Donald Trump has actually made it interesting.

44 thoughts on ““You Better Be Careful””