Two days ago Secretary of State John Kerry reportedly fell off his bicycle while taking a break from negotiations with the Iranian foreign minister in Geneva. Until the racy photo of Caitlyn Jenner appeared on the cover of Vanity Fair yesterday and became the biggest news story of the century, John Kerry’s woes were the top headline on most news outlets. The reports were all more or less the same — this BBC article is representative.

As soon as I heard about what happened, I immediately thought of Sen. Harry Reid’s “accident” on New Year’s Day, when he supposedly fell off his exercise machine. It eventually became clear that nothing of the sort had happened — it was obviously a bogus story. Depending on whose account you believe, he either got messed up by the mob, or was set upon by his alcoholic brother. 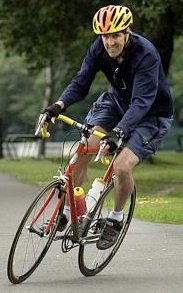 I’m a paranoid kind of guy, so I wondered if something similar might have happened to John “Swift Boat” Kerry. I thought, OK, his accident was probably exactly what it seemed to be, but what the heck — I did a little digging anyway. And what I discovered was the “curious incident of the dog in the night-time” — that is, there were no photos or videos of the accident scene. Or, if there were, they were very well-hidden.

A summary of the background on Mr. Kerry’s mission to Geneva: He was negotiating with the Iranian foreign minister. Early in the morning he took a bike ride from his hotel, which he likes to do. He was traveling with a motorcade. He pedaled across the border into France, and was 25 miles from his hotel when the accident happened. At some point his wheel hit a curb, and he fell off and fractured his femur. No other vehicles were involved. There were doctors and/or nurses in the motorcade, and he received immediate medical help.

That’s the story. But as far as I can tell, there is no video footage of the accident or its immediate aftermath. All the clips seem to be B-roll footage of him riding around in his dorky helmet. No photos of people standing around him where he’s lying on the pavement, or of his gurney being loaded into the ambulance. Just file photos of him on a bike.

The video in The Daily Mail may be footage of his cycling at around that time, but it doesn’t show the accident itself. There’s no way to tell for certain if that’s a shot of Mr. Kerry riding his bike on that particular morning. The subsequent clip may show an emergency vehicle from after the incident, but what’s happening isn’t completely clear.

There are no eyewitness accounts that I can find. Just stories drawn from State Dept press releases and spokesmen’s statements. I searched a little in French (I’m not very good at that), and didn’t see a notice from the French government, or the mayor, or the prefect of police.

So why is there nothing else? Why no cell phone footage or stills of the accident scene? Why no quotes from passersby or nearby motorists?

Look at all those people around him in the file footage of his bike ride. If that really was his entourage when the accident happened, surely one of them — or one of the bystanders — would have pulled out a phone and grabbed some footage of the big story about an American secretary of state on the ground getting emergency treatment, and then peddled it to the Mirror or its French equivalent.

The whole business made my spider sense tingle. But then, as I said before, I’m the paranoid type.

Does anyone have any further information on what happened? I’d be perfectly content to learn that the whole thing was exactly what it was purported to be.