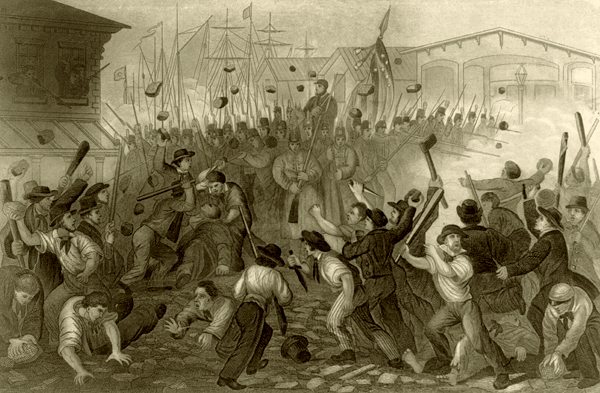 The illustration above shows a different Baltimore riot, one that occurred 154 years before the violence that is currently raging in various parts of the city. The photos of what’s happening now are too upsetting for me to format and post — check The Daily Mail, which as usual has the best photo coverage of the chaos.

I know Baltimore well. I have a personal connection with the city: during my young adulthood when I lived between Baltimore and D.C., I used to drive a taxi in the suburbs and visited downtown Baltimore fairly frequently. Sometimes I had to drive fares into the bus station late at night. It was a scary place back then; I assume it’s no less scary now, and for the same reasons.

There were parts of town that a white person was well-advised to stay out of at night. And in certain neighborhoods I was cautioned not to stop the car, and if I had to, to keep the doors locked and windows rolled up. The East Baltimore neighborhood that’s on fire right now was one of those.

I noticed yesterday that some news reports talked about “random” attacks on people by the rioters. However, none of the reporters was telling the whole truth: that the people being attacked may have been randomly chosen, but only from the pool of available white people.

Some of the photos and videos of burning police cars reminded me of the culturally enriched carbecues in the French suburbs.

It’s all very disturbing, and sad.

Below are excerpts from a selection of news stories, all sent in by Fjordman. The number of policemen injured is listed variously as six, seven, or eleven, depending on which source you read. The governor has declared a state of emergency, and the National Guard is being sent in.

First, from The Washington Times:

Dozens of people sparred with police in riot gear outside a mall in northwest Baltimore, where police reported multiple officers had been injured.

Some threw rocks and bricks at the officers, who were wearing helmets and face shields.

One man held his arms up as the police moved toward him, an action that has been repeated throughout the rallies for Freddie Gray, who died of spinal injuries while in police custody.

(CNN) A riot erupted on the streets of Baltimore late Monday as protesters clashed with police, several of whom were injured.

“This afternoon, a group of outrageous criminals attacked our officers. Right now, we have seven officers that have serious injuries, including broken bones, and one officer who is unconscious,” Capt. Eric Kowalczyk told reporters.

He vowed to find the attackers and put them in jail.

Video showed police in riot gear taking cover behind an armored vehicle, as protesters pelted them with rocks.

At one point, it looked like officers used tear gas. The Baltimore Police Department said it had heard reports of protesters setting small items on fire, and footage showed a cruiser in flames.

From The Baltimore Sun:

Mayor Stephanie Rawlings-Blake and a coalition of two dozen interdenominational leaders issued a “call for peace” Sunday after 35 people were arrested and six police officers were injured in protests over the death of Freddie Gray.

The Police Department in the afternoon released a list of the names of the 31 adults arrested, omitting those of the four juveniles.

Rawings-Blake said “outside forces” took advantage of the community’s pain to incite violence. The out-of-towners’ presence was “reflected more than just in the arrest numbers but what we saw on the streets,” the mayor said.

“Many people who weren’t from our community were, in essence, trying to hijack the very raw emotions of some of those who live in Baltimore and were expressing anger over the death of Mr. Gray,” she said. “People from the outside were inciting some of the ‘shut this city down’ sort of messaging, and then just left.”

Multiple storefronts were vandalized and several police vehicles were damaged, police said. Other property damage was reported, but police did not immediately provide further information.

Finally, from The Daily Mail:

Violent clashes have broken out across the streets of Baltimore following the funeral of Freddie Gray – turning the city into ‘an absolute war zone’.

More than 1,000 police officers are on their way to Baltimore and the Maryland National Guard is on standby as violence escalates in the city. Armored police vans are patrolling the streets as passers-by hurl rocks in their direction.

Rioters are looting gun stores, ripping off the doors and passing weapons to people on the streets. Others have stormed checking cash stores. Buildings, including a CVS pharmacy, are on fire.

15 thoughts on “Rioting in Baltimore”