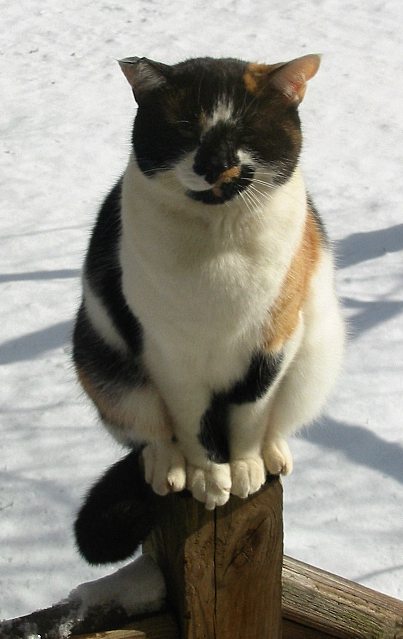 …But not the post that George is sitting on in this photo.

Yes, his name was George. He was a sport: a male calico. The vet told us that about one in ten thousand calico cats turns out to be male, and George was one of those 10k. When we first got him, he was called Genevieve, so we didn’t have to change his monogrammed handkerchiefs when he was transformed into George.

But that’s a whole nother story, and “Stories” was the theme of last week’s fundraiser. Dymphna and I like to tell stories — sometimes known as “discharging the excrement” — so maybe we’ll do another round someday.

Fundraising week is exhausting, but gratifying. Not only do we get to tell stories, but we get to hear from readers all over the globe. Some of them are regular commenters, but most are lurkers who come in clink the tip cup to make their support manifest. And we get to exchange a few words with all of them afterwards via email.

This quarter’s donors checked in from:

If all goes according to schedule, we’ll be back here again singing the same tune sometime in the summer, probably after Le Quatorze Juillet, but before everybody disappears in August.