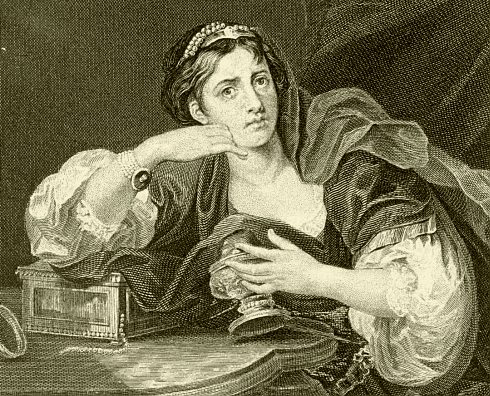 “The past is prologue”, right? Well, let’s get our prologues to the Baron’s life as Gates of Vienna’s curator and mine as the fretter observer of crossroads out of the way.

I have said that this blog is our “mission”, but that was always qualified by the voices of our audience and team. If ever a point came when there wasn’t enough financial feedback then it would become necessary to figure out our next step.

So that is our crossroads at the moment, and that is what y’all will help us decide. Not an easy task. Women generally speak with a more personal voice than do men, and this post will be no different. The Baron is a reserved introvert and says less about himself generally; I am a flaming extrovert who can say more than you want to hear.

Ah, well. At least there is no confusing us.

The Curator has spoken again, and with great clarity accompanied by a wonderful image. I don’t know where he digs up those pictures, but invariably they have a certain élan. Perhaps they succeed because he prefers period pieces, sepia-toned anachronisms. Heck, sometimes I think that’s why he married me.

Now it’s my turn again to stand in the box, though I am one of the Baron’s biggest fans and think he’d do this better. However, since I’m the one who chose to focus on the crossroads it’s up to me to figure out a way to tell you my concerns. Besides, he already carries too much of the weight of this enterprise.

Now he writes effortlessly and well. But at the beginning of GoV, the Baron found it necessary to begin using those old verbal muscles — the ones he’d flexed back in his youth via intensive A-Level studies but even in college hadn’t had occasion to utilize as intensely as would come to be his custom after a few years on this website.

At any rate, when he began to write again after such a long hiatus it was as a commenter rather than a blogger. The ferment was The Belmont Club with Wretchard’s genius for creative analysis. Among the people who commented there, several from that period went on to form their own blogs. We certainly weren’t the only ones in that comment section who felt the need to move off on our own. In all decency at some point one had to stop taking up so much bandwidth on Wretchard’s dime and time. That was way back before Pajamas Media, though.

After all these years of writing so frequently — and sometimes intensively — not to mention his labors as a curator of others’ endeavors, the Baron’s writing has become finely honed. That wasn’t always the case. In the beginning of our joint public writing life he was taken aback by how stiff his written verbal skills had become. For a long time he’d been away from any requirement for that part of his brain — though in a foreshadowing of this work here, we once collaborated on a screenplay. It was his idea and it was his perseverance that saw the project to completion. And, yes, he made it fun — though now if I were to re-read it, I’d be in a frenzy of re-writing while he’d be content to observe an occasional good line or some character delineation he found well done. (One of the best parts of that experience was creating a variety of characters; they weren’t all likeable.)

In our life before Gates of Vienna (which continued more or less the same through the first few years online), a strange and most serendipitous thing happened to the Baron: without so much as a pause between them, he moved from his real vocation of many decades as a painter of rural landscapes straight into a full-time job which utilized his secondary strength as a mathematician and programmer. Suddenly after all those years sitting in the midst of fragrant cow patties he found himself in an urban office setting working as a systems analyst/programmer in the midst of other people. Yes, he landed on his feet quite skillfully, especially considering his introversion.

They tell you not to take a job that requires a new wardrobe, but in his case it was necessary. I doubt his co-workers would’ve thought much of his painting gear (though the jeans were so ripped and painted and worn, he could probably sell them today).

What happened was this: a very good friend of many years, a friend who’d generously bought a sizeable number of the Baron’s paintings over the years, called to ask him to take on a computer job at the company where he hinmself had been for some time. The Baron had kept up his computer skills in the off-season (i.e., deep winter when it was too cold to sit outside). That offer turned out to be serendipitous: after the contract was over, he found other work. This led to a whole new life, one with enough money in it that we lived at a new level; suddenly we were consumers. Not big spenders by any means, just not pinched anymore. I doubt you could have told the difference, really. Except for the clothes. The Baron noticed he was treated more respectfully when he had on a coat and tie. He hadn’t noticed a lack of respect in his painting clothes, but he could feel a discernible response to his costume in public, at, say, a restaurant.

That life of contract computer work and commuting evolved into a salaried job among other groups of congenial people. The Baron was able to pay our son’s way through college and we saw no end in sight for a working life. But all that changed when the private company for which he worked was sold and the new brooms wanted to sweep, as new owners often do. Their main change was to move the senior programmers out of offices and into cubicles — to save rent space on square footage, probably. Years earlier, when the Baron saw others working in that environment, he’d wonder how people had evolved the coping skills required to function in a noisy environment and still be able to do deep thinking. For introverted types like him, he figured it would be torture. In short, the new brooms made a path for him to be laid off graciously. He’d had no trouble finding new work in the previous years and he didn’t think this would be any different.

By then, Gates of Vienna was up and running and the future Baron had fledged and gone. During those fat years before the advent of cubicles, I stuffed money into savings. We’d never had the chance to save before and I investigated every trick I could think of to compile self-employment savings during his contract years, and then those company pension funds during his salaried work. Had I not done that, we would have long ago had to quit the project that has become Gates of Vienna. And then again, our years of living on the edge while he painted had been good preparation for this time when the Wheel would turn again, past the fat years and back here to the lean times. We already know well how to live this way.

While the Baron was busy being a programmer, my own life changed in some radically unexpected ways. Not too long after the Baron became a working stiff, I’d had to leave my job because of severe fatigue. It would eventually turn into full-blown fibromyalgia, though that process took years, and after that years of accepting what it was. I didn’t go down without a “mind-over-matter” fight, but as anyone with this disorder can tell you, fighting it off makes it worse.

In the beginning, however, it simply became increasingly difficult to stay awake during my work commute. Sometimes I had to pull over and sleep for a while. One occasion sticks in my mind: I’d made it into our driveway somehow, but I couldn’t maintain consciousness any longer. What I recall so vividly is the most profound relief I’d ever experienced when I stopped, turned off the car and simply fell into a deep sleep. Twenty minutes later I was able to drive the last quarter mile home.

Around the turn of the century (that sounds so far away now) I developed breast cancer. The less said about the vast conglomerated steamroller that is U. S. Breast Cancer, Inc., the better. It’s partly a scam, but the surgery was excellent. The radiation I refused, and my only regret is agreeing to chemotherapy: it complicated and compromised my health in so many ways. To make a long story short, in more or less this order:

So where from here? I am planning to investigate adverts on the blog. Mostly Amazon-type things. They won’t bring in much, but at this point every little bit helps. Each quarter we — the Baron and I and you, our team and our donors — will assess the situation. Things are fluid. Who knows what will happen in the Garden of Forking Paths? We will keep you informed of trends we see, but meaningful predictions aren’t possible. Look at the acronym for this phrase: Still Hanging In There. That’s what we’re doing, still hanging in there, and the acronym reminds us it’s a roller coaster ride sometimes. I’ve lost a lot of hats that way…

Everyone’s response to date has been so encouraging. Not only our faithful-from-the-beginning donors, but new folks, and others, previous donor that we hadn’t heard from in a while. This is good! It’s very good!

Bless all of y’all!

Here’s who showed up yesterday:

More of the same tomorrow…but from the Baron.You can tell it’s Da B because he’ll be the one not snoozing on the chaise longue.

— Robert Hunter, from “The Wheel”

7 thoughts on “The Past as Prologue”