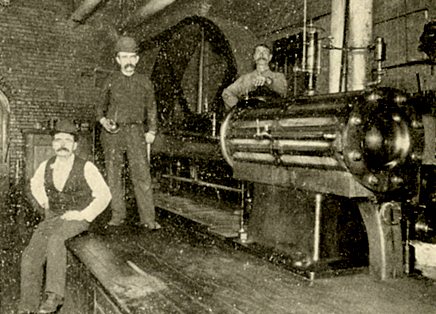 The theme for this week’s fundraiser is “Curators at the Crossroads”. Like most joint Dymphna-Baron operations, the topic was a hybrid. Dymphna felt the need to focus on the possibility that we may soon be faced with hard choices about how address the funding crisis at Gates of Vienna. And my idea was to discuss the complex processes at work here — I wanted the people who are being asked to donate to have some idea of what they’re supporting.

Dymphna and I have arrived at a decision point about what we need to do and how to keep this operation going. But what is actually done here? And, more to the point, who does it?

As I mentioned on Monday, we are now more curators than owners, more managers than authors, more supervisors than entrepreneurs.

The collective endeavor known as “Gates of Vienna” has become a sprawling, eccentric, ad-hoc production facility and clearinghouse for information about the Jihad and the Counterjihad. In order to distribute useful information about what is happening to the West, we are forced to overcome the silence, obstruction, misdirection, and outright mendacity of the mainstream media and our political leaders. To do that we must ferret out material that would otherwise lie buried, organize and collate it, translate and subtitle it as required, and disseminate it in a format that is accessible to a generation that has trouble comprehending any medium more complex than a post-it note.

That’s why video is so important. This is where Vlad Tepes comes in: Vlad has a knack for video, and a two- to five-minute video is the most effective way to catch the attention of members of the Millennial generation. His work is crucial — I often insist that it is more important than anything I do. That’s the reason we assign a tenth of what we receive this week for the upkeep of Vlad.

My primary skills are text and images, while Vlad is adept at audio and video. So we specialize in our collaborations: I write video intros, edit transcripts and supply still images when needed; he cleans up audio, edits video footage, and adds titles and subtitles to the final product.

Although video reaches an audience that is larger by at least an order of magnitude, I still consider text important. There are many old-fashioned people (I admit to being one) who prefer to take in their information that way, and some of them may even be essential for spreading the word in places where textual information still rules.

Images have a propaganda value of their own. A carefully-crafted graphic statement — such as the one at left — can grab attention, excite discussion, and induce viewers to see important issues in new ways. It’s hard to track how much influence they have, because they tend to spread without any link to our blog or any reference to where they came from. One out of every twenty or thirty may have viral tendencies, so I keep churning them out.

But video has the greatest reach of all. A video that goes viral on YouTube may have millions of viewers and change people’s opinions on a topic. Five minutes with Pat Condell or Michael Stürzenberger on video can have a far greater effect than ten thousand words by me — or even Fjordman.

So I give video top priority. Here’s how a typical Vlad-Baron collaboration works:

Someone sends Vlad a tip about a video of Muslims rioting in Patagonia. He hails me on skype and asks if I can find someone who will translate Patagonian (yes, I know Patagonian isn’t a language — but this is for fun).

I open up my auxiliary brain (an MSAccess database that holds most of the useful data and software I need to do my work efficiently), look in the Translators table, and pull out the email addresses for two or three Patagonian translators. With luck, one of them may be available to translate the video.

The translator sends me a document or text file with times assigned to each translated line. I edit the text, and then process it using VBA software to make a subtitle file in a format that Vlad’s software can import.

I pass the file to Vlad, and he uses it to create the final subtitled video. We both post it on our blogs.

I always include a text transcript (if I have one) when I post a video, for two reasons: (1) People who prefer text can avoid the video and read what was said instead, and (2) If the video is important enough, someone may want to use the timed transcript to translate it into additional languages and produce videos that go viral among native speakers of those languages.

The imaginary example above describes the simplest form of collaboration, involving only two production supervisors plus the translator. But many projects are much more complex, and may involve a dozen or more collaborators. This is especially true when we (that is, the loose conglomeration of people whose work is highlighted here and at other Counterjihad sites) employ our own videographers and sound technicians to produce original videos.

Project management for such efforts can be tricky, because nobody gets paid and nobody acts as the “boss”. I’ll describe some examples of those enterprises in a future post.

When I only post one or two articles plus the news feed on a given day, it must seem to readers that I am away somewhere doing other things that have nothing to do with this blog. Or even that I am idle. Just sitting here with my feet up on the printer, filing my nails. Or watching tornado videos while I eat salted peanuts from a can and drink Yuengling straight from the bottle.

If only! Alas, no — I spend most of my time either editing texts or engaged in complex communications about those texts. Or, if I’m lucky, making a new digital image.

Supervisors… managers… curators… Whatever you want to call us, this is what goes on here. It’s what we’re asking you all to support.

Yesterday’s donors chipped in from the following locales:

A lot of people have heeded our call and stepped up to help out. For that Dymphna and I are profoundly grateful.

As a matter of interest: to date there is very little groundswell for our taking on ads in lieu of fundraising. So I’m still hoping to escape those ugly skyscrapers on our sidebar — I detest those things.