A little culturally enriched mayhem took place in the wee hours of yesterday morning at a well-known Berlin landmark. Our British correspondent JP has translated an article about incident, and includes this note:

This would be a run-of-the-mill adolescent fight story apart from location — by Berlin’s television tower near Alexanderplatz — and the protagonists — Germans vs foreigners (Ausländer) including a Syrian, Libyan and Afghani.

The translated article from Der Tagesspiegel: 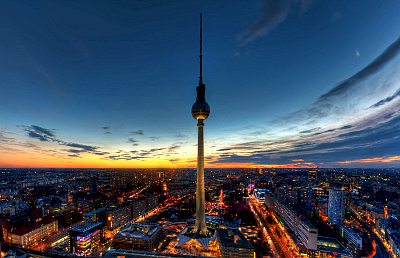 Directly by the television tower in the early hours of Saturday two youth groups attacked each other with fists and bottles. It was about a woman.

The argument escalated after a short exchange of words. According to police reports a woman was accosted by several young men. Her friend intervened, then the two groups started to attack each other, one group consisting of Germans, the other of foreigners. Someone from the latter group was responsible for hitting a man on the head from behind with a bottle. As he lay on the ground, he was kicked and beaten by five persons. After police were summoned and arrived, this group fled. In the vicinity it was possible to immediately apprehend three of the attackers. The young men, aged 17, 18 and 19 from Afghanistan, Syria and Libya were taken to a custodial collection point and released after police processed the paperwork.

They are accused of causing dangerous bodily harm. The beaten Berliner suffered light injuries. Only a few hours earlier there had been a police deployment in Alexanderplatz.

One thought on “Showdown at the Alex Tower”