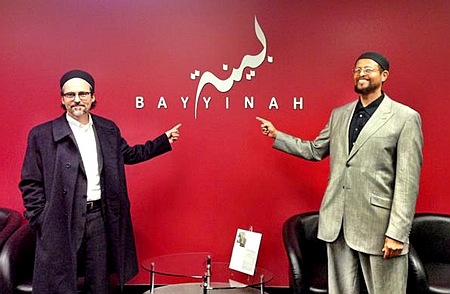 Below are excerpts from the newsletter sent out today by the Tennessee Council for Political Justice.

In its ongoing mission to radicalize Muslims young and old in Tennessee, the Muslim Brotherhood Islamic Center of Nashville (ICN) led by Imam Mohamed Ahmed, is sponsoring an event at Vanderbilt University featuring two American converts to Islam (or as they prefer to call them, “reverts”), Zaid Shakir and Shaykh Hamza Yusuf, co-founders of Zaytuna College, an unaccredited Islamic postsecondary school in the U.S.

True to form, Shakir who says no Muslim can be a terrorist, is a popular speaker with U.S. Muslim Brotherhood organizations such as CAIR, ISNA and the Muslim Students Association. He professes to the same end goal of the Muslim Brotherhood — to see the “day in which America is a Muslim country ruled by Islamic law.” [pdf] And consistent with the Muslim Brotherhood’s plan as laid out in its 1991 Explanatory Memorandum, he sees organizing Muslims in this country as the way to accomplish this objective.

He understands the political leverage gained by remaining separate and apart from American society by claiming a religious-based moral superiority. He reinforces this by asserting [pdf] that “American society ‘is sinful and constitutes open rebellion against Allah.’“

Cut through the veneer of Shakir’s co-presenter Shaykh Hamza Yusuf, and it’s the same Muslim Brotherhood endgame — “slaves to Allah” [pdf] will cure the ills of America because as they know, slavery to “Islam is the solution.” His 1996 speech to the sharia-for-America Islamic Circle of North America (ICNA — see Newsletter #41) makes his true agenda perfectly clear:

“I am a citizen of this country not by choice but by birth. I reside in this country not by choice but by conviction in attempting to spread the message of Islam in this country. I became Muslim in part because I did not believe in the false gods of this society whether we call them Jesus or democracy or the Bill of Rights or any other element of this society that is held sacrosanct by the ill-informed peoples that make up this charade of a society…”

Civilizational jihad in the name of religion is what political sharia and the Muslim Brotherhood are all about.

4 thoughts on “Civilizational Jihad in Tennessee”