Our Dutch correspondent H. Numan sends his account of the recent tragic demise of a soccer linesman in The Netherlands, who was kicked to death by the culturally enriched members of a local youth football team. Our correspondent provides background information and details that are not widely available in the English-language media. 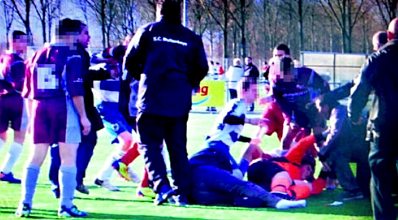 A serious religious problem in The Netherlands
by H. Numan

Last week an assistant football referee or linesman was assaulted after the match, and later died of his wounds. His name was Richard Nieuwenhuizen.

His assailants were three boys of 15 and 16 years. They didn’t like his performance on the field and attacked him. In front of his son, no less. Later a fourth boy was arrested.

The mainstream media were very careful not to mention ethnicity. With very good reason: at least two of the boys were Moroccan, one was Antillean. The ethnicity of the fourth boy is still unknown, as the media try to keep that as vague as possible. You may rest assured number four is either Moroccan or Antillean. If only because the media refuse to mention his ethnicity.

The team already had a notorious reputation. New Sloten* (the team) had been suspended in the past for assaulting referees. The father of one of the now-arrested youngsters, a Moroccan, is a trainer on that team. His son is merely following in his footsteps: daddy was arrested for assault during or after a match five years ago. He head-butted a referee. For this he was suspended for five years. Not only from his trainer job; he was not allowed to be present in the club. This is a pretty steep sentence, by multicultural standards.

The mainstream media and the government are in dire straits. Both of them try to see this as “an incident”. Has nothing to do with Moroccans, just something that happens during football. A very unfortunate incident, but no more than that.

Most people do not agree. As ethnicity was not revealed, just about everyone read between the lines that it was once again one of the many “incidents” that surround Moroccans.

The boys in question have already attained hero status amongst their peers. Several classmates have been suspended from school for twittering “Free our heroes”.

I’m sure everything will be kept under wraps, but the multicultural religion just received another major dent. Just about everything they believe in and stand for is under serious question.

All those boys, juveniles of 15 and 16 years, had a criminal record. All have been treated with kid gloves: they didn’t just play (if you can call that play) football, but received free of charge a training in kickboxing. To release their energy, no doubt. But many see this almost as professional training, so they know exactly where to kick to inflict grievous injury.

The kickboxing training is free of charge. To the boys, that is. The community (taxpayer) pays for it all. A multicultural project for ‘community cohesion’ and to set crooked boys straight. This kind of project is the multicultural answer, so they can pretend they do something. Most people find it strange, to say the least, to provide free of charge combat training to juveniles who don’t need that kind of training to begin with.

It’s akin to giving Al Capone a course in tax law, so he can better manage his business.

Their trainer can be proud: they kicked him in his face when he was down on the ground. He staggered away to die two hours later of a brain injury. Not surprising, if you got kicked in the head with football shoes.

As you can expected, Mr. Wilders did have something to say about it, and nothing complimentary. The PVV reaction is somewhat restrained, most likely because the media do everything possible to keep this “incident” down. Apart from that, they don’t like Mr. Wilders, so anything he has to say is not worth reporting about anyway. Unless it is negative.

Once again, most people start asking questions. Why hide the ethnicity? Why always flaunt ethnicity as loud as possible when it involves a Dutchman, but otherwise never?

A week earlier an old murder case (Marianne Vaatstra) was solved. It wasn’t committed by an illegal immigrant, as many expected, but by a local farmer in her own community. This was posted with major headlines in every newspaper. Almost as a sign of relief: “We are so happy it wasn’t an illegal immigrant, but thank God a white Dutchman!”

Now all these boys currently under arrest are of ethnic minorities. All of them were born in The Netherlands. All of them despise the country, or at least look down upon it. All of them feel vastly superior (based on what?) to the Dutch. And all of them are on the bottom rung of society. With little possibility to climb to a higher rung. Even if they wanted it.

It is almost certain they will be judged under juvenile law. Which means that the 15-year-old faces a maximum of one year and the 16-year-olds no more than two years in jail. Very likely a lot less than that. Judges are notoriously lenient in cases like this.

In another trial two Moroccans were prosecuted for killing a man while fleeing the police on a scooter. Their sentence? Nothing. Because the two accused each other, the court could not establish who was the main perpetrator. And the court decided that they had spend already longer in arrest than they could legally sentence them to.

In this case, you may be certain the defense will try that trick, too. It is uncertain who started the argument, so it might work again.

To conclude this article: the well-known reporter Peter R de Vries twittered a stupid message: he blamed the linesman for it. Which didn’t sit very well with his audience. Later he withdrew his remarks, and said he was “misunderstood”.

* A Note on Nieuw Sloten

Nieuw Sloten (New Sloten sloot = ditch, but this is just a name) is located in … the Bijlmermeer. This area of Amsterdam has a VERY bad reputation. So bad that even the Amsterdam municipality found it necessary to change the name of that area into Sloten.

In effect it is a black ghetto. It’s definitely not the worst (in terms of housing, it’s pretty new and more than decent) area to live in. Not a slum at al. When it was constructed, it was going to be the latest of the latest. As a mock-up it looked stunning. But in real life, very different. Everything is high-rise, people have the feeling they are literally bricked in.

That resulted in no volunteers going to live there. So the municipality assigned those houses to other groups. The population is predominantly from Suriname, the Dutch Antilles and Muslim. There are some white folks to be found there. When uniformed, you address them as ‘officer’ 😉 When uniformed in a sweater and sandals, you call them ‘welfare worker’. You won’t find a lot of either. Both the police and welfare workers know better than to go there.

The Bijlmer was in the world news when a Boeing 747 crashed on it, about 15 years ago. A cynical Dutch joke is to ask if it might be possible to persuade El Al to do more regular flights there.

The outrage is not because this is the most recent of so many “incidents” involving Moroccans. That is nothing new, regretfully. Not because it is football related-either. Same thing, nothing new there as well. Far more because it involves merciless manslaughter done by juveniles during a junior sporting event.

No major league game, just a sporting match between two teams of youngsters.