Do Whites Deserve to Be Attacked?
by Fjordman

When discussing the negative consequences of mass immigration, critics sometimes claim that the pro-Multicultural media elites will only want to restrict mass immigration after they themselves have personally felt the negative effects of the policies they support. This is true in some instances, but not always. A recent case form Norway illustrates this.

Under the heading “Robbery wave as deserved,” the left-wing national daily Dagbladet in Norway ran an essay on November 1, 2013 by the writers Arild Opheim and Elin Ruhlin Gjuvsland. They have both worked as profiled journalists for the state broadcaster NRK, Norway’s equivalent of the BBC.

It is an old saying that “A conservative is a liberal who’s been mugged.” Yet here we are dealing with two open-border Multiculturalists who were mugged in a very brutal manner. They reacted to this by becoming… even more devout open-border Multiculturalists. The couple were assaulted in their own private home in Oslo in late 2011. The two hooded intruders spoke broken English, mixed with some Arabic and Spanish words. They said, “Don’t look. Sleep. If look, we kill.”

The couple were tied up in their bed in the middle of the night and robbed of their valuables. One of the young foreign criminals was later caught. He turned out to be an 18-year-old North African from Algeria who had lived in Spain for some years. The female victim, Elin Ruhlin Gjuvsland, is relieved that she did not become a racist because of this traumatic ordeal.

It turned out that the two young criminal men were asylum seekers who had recently had their applications for residency rejected. The conclusion drawn by the victims Arild Opheim and Elin Ruhlin Gjuvsland was that they and other Norwegians deserve to be violently attacked because of the country’s allegedly restrictive immigration policies. (In reality, the white natives could be a minority in their own country by the middle of this century. The capital city Oslo already contains more ethnic groups than there are member states of the United Nations).

These journalists did not refer to illegal immigrants even as “paperless immigrants” but as “dreamers”: nice people who simply dream of a better life in Europe but are being unfairly denied this. They used the term “as deserved” (som fortjent) explicitly in this newspaper essay about violent attacks against the natives. Does this imply that a 90-year-old Norwegian woman who is assaulted and robbed by foreigners in the country where her ancestors have lived since prehistoric times somehow “deserves” this? According to this essay, the white majority population apparently “deserve” to be assaulted and robbed.

The above-mentioned article did not stipulate any age limit. It seemed to indicate that 9-year-old girls or 90-year-old women deserve to be physically assaulted by immigrants solely because they are white and their country has not yet accepted unlimited mass immigration for billions of people. Not only did these two journalists from the state broadcaster say this; the newspaper Dagbladet saw fit to publish this claim.

This particular essay was so extreme even by Scandinavian standards that it quickly gathered hundreds of readers’ comments on the Internet. All of them without exception were soon removed because the paper found them “offensive.” So this newspaper could publish an essay stating in plain words that Norwegians in general deserve to be attacked because of their country’s allegedly restrictive immigration policies, yet they could not allow the reactions of readers who found it insulting that their mother, sister or son deserved to be assaulted. Fortunately, the dissident writer Christian Skaug and others at the alternative website Document.no managed to capture a copy of many of these readers’ comments before Dagbladet deleted them.

I had an email discussion with Cornelia Kristiansen, who is responsible for the debate section at Dagbladet, in December 2012. I wanted to publish a reply to one of their negative articles about me. I agreed to make some changes to the text, but I stood my ground when it came to referring to a recent case in the Netherlands as anti-white racist violence. Just a few days earlier, a white native Dutch linesman, Richard Nieuwenhuizen, had been kicked and beaten to death on the football field in Almere in front of his son. The fact that the perpetrators were non-European immigrants was systematically downplayed by most Western mass media. This was a case of North African Muslims killing a native European man. 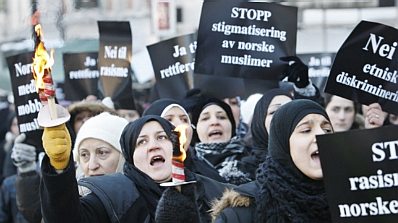 In June 2013, six teenagers and a 51-year-old man were jailed for their role in Nieuwenhuizen’s death. I have noticed that reporting on “racism in football” has become a major priority in recent years. What is meant by that seems to be any kind of gesture or word that any non-European might potentially deem offensive. Yet here we have a case where a European man was beaten to death in Europe by non-Europeans. For some reason, this is not referred to as “racism in football.”

The left-wing newspaper Dagbladet refused to publish my suggestion that this could be seen as anti-white racism. The reason for the paper’s decision was apparently that doing so would violate their anti-racist policies. So what can they publish?

To put things in perspective, consider the so-called paramedics incident in Oslo in 2007. In Oslo, one black man from Ghana had beaten another black man from Somalia. The Somalian man urinated on the ambulance drivers who showed up at the scene, after which they left. It later turned out that the Somalian man had suffered more serious head injuries than the two paramedics initially suspected. Because of this, most of the mass media and left-wing political establishment, including ministers from the left-wing coalition government of PM Jens Stoltenberg, turned this incident into a nasty case of supposed “white racism.”

In Norway, a country straddling the Arctic Circle, one African man beat another African man. The media reacted to this by ruthlessly going after the white ambulance drivers who came to help. The public harassment of them was so serious that it brought the two men almost to the brink of suicide. These baseless accusations of “racism” were repeated by Dagbladet’s political editor Marie Simonsen, among others. One of the two ambulance drivers, Erik Schjenken, later sued the newspaper Dagbladet for making false accusations. Schjenken won this legal case in court, twice.

What the left-wing pro-Multicultural newspaper Dagbladet has demonstrated is that it is OK for them to publish baseless accusations against specific (white) individuals in the name of anti-racism, diversity and “tolerance”. It is also OK to publish essays indicating that ALL whites deserve to be physically assaulted if they refuse to totally abandon national borders. On the other hand, they cannot even publish the claim that non-Europeans beating a European to death might have something to do with racism.

The people implementing these policies are the very same people who claim that there is no media bias and that any talk of media censorship is a “myth.”

PS: The authors of this essay had extremely bad timing. Just a couple of days later, on November 4, 2013, three people were stabbed to death on an express bus in western Norway. The killer was a failed African asylum seeker who was to be deported the next day.

61 thoughts on “Do Whites Deserve to Be Attacked?”