This post is off-topic. Readers who want to stick to current political trends may safely skip it.

I needed a break from all the horrible topics I have to deal with every day, so I decided to write about something that is important to me, and is only mildly melancholic. 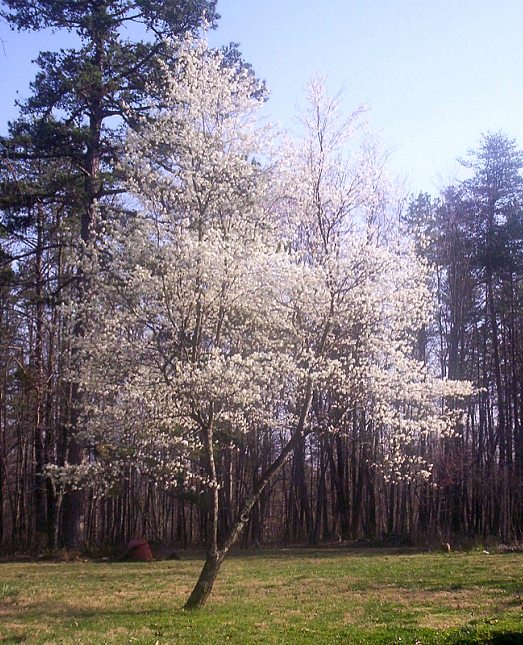 It snowed here at Schloss Bodissey today, the sort of late-winter wet snow that is not worrying because it doesn’t stick to the roads and won’t hang around for very long.

Looking out the back door this morning reminded me of our redcurrant tree, which would normally bloom in a couple of weeks’ time. It won’t be blooming this year, however, because there is no more redcurrant tree, thanks to the blizzard of January 3.

The photo at the top of this post shows the redcurrant tree at its best, blooming in late March of 2007. But “redcurrant” isn’t even its proper name. Dymphna and I called it that for twenty-five or thirty years, because that’s how our neighbor, an old black woman, identified it. Like all poor country black people, she was an expert on anything that grew naturally and could be eaten. She told us that the fruit ripened in June, and could be made into pie or other desserts. She would come over here during the season, and she and Dymphna would pick all the berries they could get. Dymphna would make summer pudding with them, combined with other berries in season.

But it was never a redcurrant tree. Many years later we learned that it was a juneberry, which is what the local nurseries call the tame varieties they sell. It’s also known as a sarvisberry, shadbush, or saskatoon tree.

“Sarvisberry” is my favorite. In the Appalachian Highlands of Virginia, the folk etymology for the word is that the tree got its name because it blooms just after the ground thaws in the early spring, which is when graves can be dug and all the people who died during the winter get a burial service. “Sarvis” is an archaic dialect version of the word “service”, so the association makes sense. However, the word was actually brought to the New World from Europe, where “service tree” can be traced all the way back to the Latin word sorbus, or rowan.

But I prefer the highlanders’ explanation. Besides, the assimilation of words to more familiar terms is a very common process in the English language, so it’s quite possible that those early settlers gave the local tree that name for precisely that reason.

When I first moved here in 1978, the redcurrant tree was about half the size of what it attained before it met its demise. It was all bent over, as if it had a great weight leaning on it. I found out later why that was when I watched Dymphna and our neighbor pick the fruit: they would pull the lowest branches down so they could more easily pluck the berries from them. After years of such treatment, the tree just bent in that direction, as if offering its fruit to those who came to pick it.

Over the decades the most bent-over branch would eventually die off, and a new, vigorous sprout would appear further back, growing into a second trunk, which would also become bent in turn as its fruit was harvested. I think we saw the process repeated two or three times during the life of the tree. Eventually it got ahead of the fruit-pickers, and the highest berries could not be reached from the ground. In later years Dymphna would send me up the tree with the extension ladder to pick the fruit for her.

It often happened that the tree would fill up with cedar waxwings during berry season: the juneberries are apparently one of their favorite delicacies. Suddenly one morning the tree would be alive with dozens of them, hopping around among the branches to get every possible berry. I never saw them at any other time, just during juneberry season. Dymphna, of course, used to curse at them when they arrived.

On the morning of January 3, 2022, a major blizzard struck Central Virginia. More than ten inches of wet snow came down in a very short period of time, dropping trees and knocking out the power.

Right after the electricity went out, I thought I ought to take a photo of the storm. I didn’t want to actually venture out into the mess, so I just opened the back storm door, stuck the camera out, and took a picture. I didn’t realize until much later that I had just taken the last photo of the redcurrant while it was still standing: 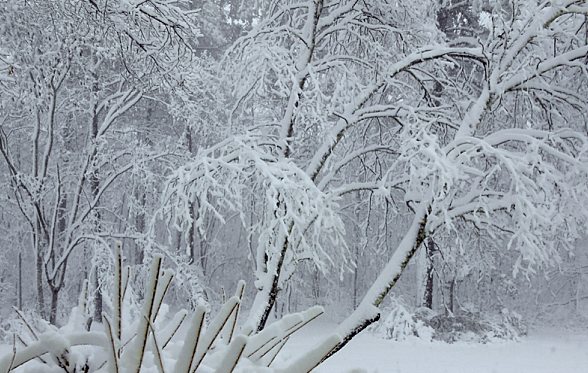 Three hours later the storm had ended and the sun came out. I went out the front door to assess the situation, and then walked around back, where I was astonished to see the following sight: 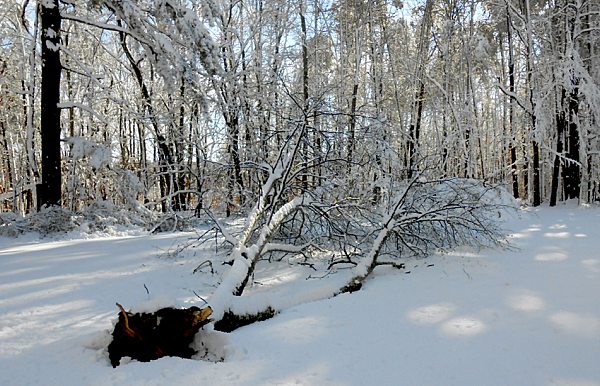 The tree fell over in that direction because that’s the axis on which it had been bent over to be picked for all those years. When it was groaning under that terrible load of wet snow, rather than drop branches the way a lot of other trees did, it just keeled over in the old familiar direction.

The loss of the redcurrant tree is a great shock. It shaded that little corner at the back of the house for almost forty-four years, and now there is a big empty white space where none should be.

For a while I entertained the notion that it might be possible to pull the tree upright somehow and re-establish it. But when the snow melted, I could see that the taproot and one of major side roots had snapped clean off. There was no way that tree could survive in any meaningful form.

After the weather warmed up and the yard dried out, I started cutting the branches off the downed tree with a handsaw. I no longer have a chainsaw, so I’m going to have to wait until I can get someone in here to cut it up into pieces that are small enough for me to haul away.

This is what the redcurrant looked like this morning, with a new batch of wet snow resting on it: 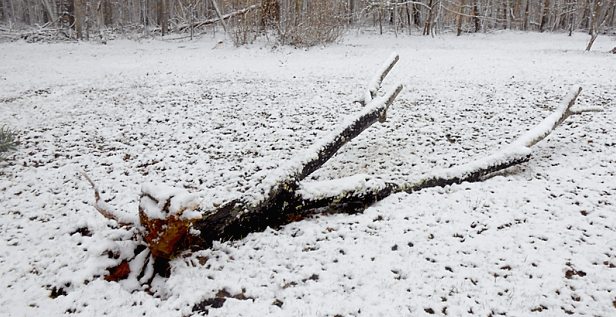 By this time next year, there will probably just be a little disturbed area of soil where the sarvisberry used to be.

17 thoughts on “Requiem for a Sarvisberry Tree”