I buried my wife late yesterday afternoon in the graveyard of our little rural church in Central Virginia. The Episcopalian service was everything that one could have hoped for, and I know that Dymphna was pleased with the liturgy, the music, and the fellowship in the parish hall after the Committal.

A year or two ago, after a discussion about this eventuality, Dymphna gave her assent to the publication of the photo below. It was the only photo of her that she would allow to be posted. It was taken a number of years ago, in happier times. 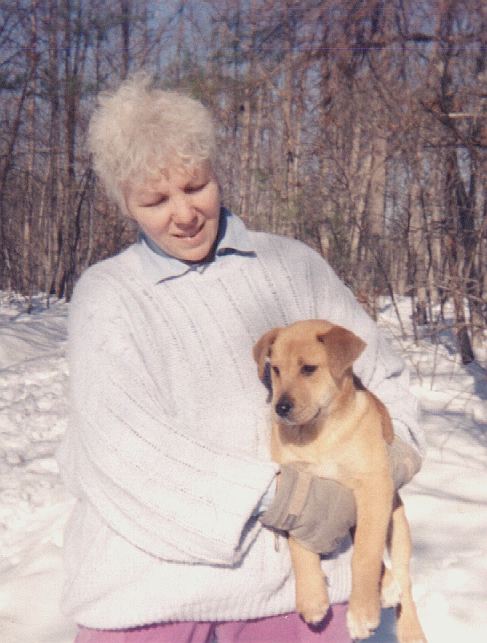 Discussions about her eventual demise became more and more frequent in recent years, as her condition gradually worsened. She would tell me what she did and didn’t want for her funeral and so on, and I promised to honor her wishes. The most recent such conversation occurred last Thursday, when we were talking about Protestant hymns. Since she was raised a Catholic, she didn’t really know any Protestant hymns until she became an Episcopalian. I asked her which ones she liked. She named a few, and then said, “I really love ‘There’s a Wideness in God’s Mercy’. I want that at my funeral.”

I honored her wish.

Dymphna and I first met forty years ago last month. We had a small celebration for the occasion. Unfortunately, she didn’t make it to our fortieth wedding anniversary.

On our first date we went out to dinner to the Double T Diner in the southern suburbs of Baltimore. I was attracted to her for all the normal reasons, of course; but what really made us fall in love with each other was our intellectual compatibility. Her fields were theology, philosophy, psychology, literature, history, and poetry. Mine were mathematics, art, science, linguistics, literature, history, and poetry. So we had some overlap, but the territory where we had the greatest meeting of minds was in poetry. Both of us loved to read poetry, and both of us wrote it. Sitting there in that diner over dinner, I found out that she knew about Wallace Stevens — amazing! I had never met a woman who had read Wallace Stevens, never mind understood him. In the next few weeks she introduced me to poets I hadn’t read, and I did the same for her.

We were both head-over-heels. In due course she moved down here and we got married. Now that she is gone, I’m allowed to tell you that she was ten years older than I. We agreed that we were fortunate the difference was only ten years. Still, it was anxiety-inducing to contemplate the age gap. I remember thinking about it back in those early days, when I was so happy. I did the actuarial estimate in my head and said to myself, “Well, I think I can expect to get forty years.”

That’s what I got. And I’m so grateful for every one of them.

In the summer of 1979 I suddenly acquired three teenage stepchildren. That was a learning experience like no other, but I won’t go into any details here. Suffice it to say that the two surviving stepchildren were down here in the house all week, along with the future Baron. I can’t tell you how gratified it made me to have them all here.

The extent to which I will miss her is hard to describe. Any time I had some insight or question about current events, politics, history, religion, sociology, or any other general intellectual topic, I knew I could always count on her being interested and engaged in a discussion about it. The future Baron can tell you how interesting (and sometimes heated) our dinner-table conversations were.

That is what I will miss the most. During the past five days, when something important occurred, I found myself thinking, “I must tell her about this.” And then it hit me — the person to whom I could tell all the stories is no longer here.

It’s going to be a hard time for a while.

Although her condition had been slowly deteriorating for fifteen years, Dymphna’s death was sudden. On Friday she was outside working on the flowerbeds. On Saturday the fever and cough came back. Early Sunday evening I had to take her to the emergency room, and she died just after midnight, before she was even admitted to the hospital. I was with her during her last moments.

Dymphna wrote the following poem in the mid-1990s, a few months after her mother died under similar circumstances. The month and time of day are slightly different, but in other respects the poem is exactly descriptive of last Monday’s events. Two of her sons read it out to the congregation during the eulogy portion of yesterday’s funeral:

There is a Midnight

There is a midnight waiting
For all of us. A particular one,
That if we knew, we could put
On our tombstones now.
It will be labelled our last day,
But not by us. We will not
Be there to mark its going.

Many people die at 3:00 a.m.,
Exhausted at the prospect
Of yet one more passage
To be gotten through.
My mother did this. She died
At 3:24 of a fine May morning;
Having gone to East Three
To celebrate my birthday,
She was probed and prodded
Into her mortality.

It was sudden, her flight from us.
The doctor had told her she could
Go home. Perhaps she misunderstood
Where home was. Or really did know.
It is like that with the very old.
They listen between the lines
And do as they please.

She was a woman of formidable intellect. I shall grieve for her for the rest of my life, but I know she is at last without pain.

Below is an excerpt from a poem I wrote more than a decade ago, concerning the death of a close friend. It was the first death within my cohort, and it hit me hard.

It’s equally appropriate this week, because there was a stiff wind blowing yesterday afternoon during the Committal, in advance of an approaching rainstorm. Fortunately the rain held off until after the ground was closed and we were back in the parish hall for the reception.

The ground has been closed now, and there you lie,
breathing the sod from underneath,
while above you grass blades bend in the teeth
of a stiff wind, with a few leaves flickering by.

The ground has been closed; the world waits for the sun.
Some have tomorrows. Some must wake
and roll away the stone. It is for their sake
the verses continue, the song not quite done.

I’m not yet ready to resume normal posting here, but I’ll try to compile a news feed for tonight (using the tips from last Sunday/Monday), and also on subsequent nights. Tipsters are invited to begin sending in their news feed tips again.

I’ll use the next couple of days to start catching up on the huge backlog of emails that has accumulated all week.

One final note: I left this note in a comment on the previous post, but I’ll reiterate it here.

I saw the decision to set up a gofundme initiative for the funeral expenses, and I deeply appreciate the effort. I don’t object to it, but if anyone is concerned about its being a scam, don’t donate to it.

Here’s what I’ll do: any money sent to me (by whatever means) that is earmarked for funeral expenses, will be applied towards them. If donations exceed my expenditures, I’ll donate the difference to a reputable local charity (already chosen) that helps the victims of sexual abuse and exploitation, especially children. Those of you who have followed Dymphna’s writings over the past fifteen years will understand why we (her sons and I) chose this charity.

Once again, if you are uncomfortable or suspicious about any of this, please don’t donate. You needn’t worry: we had set aside money for this contingency, and can cover the funeral costs.

55 thoughts on “The Ground Has Been Closed”