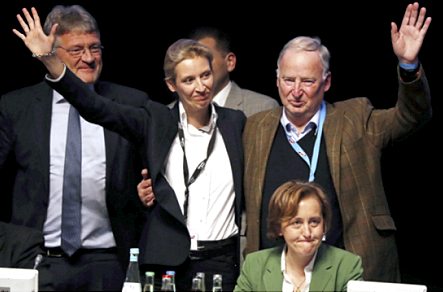 German law prohibits the government from using tendentious or biased characterizations of legally established political parties that hold seats in the Bundestag. The federal government violated that law with its descriptions of the AfD (Alternative für Deutschland, Alternative for Germany). Germans are well-known sticklers for the rules, and a new legal ruling now requires that the government stop characterizing the AfD as “right-extremist”.

JLH, who translated the article below, includes these comments:

Ripe with contradictions irony and glory, the AfD arrives in force at the Bundestag, only to hear Frauke Petry take her leave of them. She won the battle to censure Björn Höcke for his “monument of shame” speech and prevent him from standing for the Bundestag, but spectacularly lost the battle to take the party mainstream. And two old guys, Gauland and Meuthen, and two women, Weidel and von Storch, piloted the party into parliament by “speaking truth to power”, and it looks like they’ve just gotten started.

Meanwhile, here is a maneuver that sets the government on its heels even before the first session begins. The Tea Party needed something like this against the IRS and assorted lefty enemies in Washington. This is what the Rule of Law is all about.

The translated article from the Bavarian daily Münchner Merkur:

Federal authorities may no longer designate AfD as right-extremist. The party’s national executive board has pushed through a cease-and-desist injunctive order against the Federal Republic.

In ads recruiting employees to work in the area of right-extremism, the Federal Criminal Police Office (BKA) may no longer show an image of the AfD Twitter account. As the Cologne attorney Ralf Höcker said on Thursday, the BKA signed an appropriate cease-and-desist order this week. In a June ad on Twitter for an employee in “internet evaluation in the area of right-extremism,” the BKA had posted a screenshot of — among others — an AfD Twitter account.

The attorney Carsten Brennecke, who had obtained the cease-and-desist order, comments on the order’s consequences as follows: “Contractual obligor is the Federal Republic of Germany. Neither the chancellor, nor her ministers nor the federal authorities may call the AfD right-extremist, whether in help-wanted ads or elsewhere.”

Furthermore, according to Brennecke, the Federal Republic must guarantee that all federal authorities are informed of this, so that there will be no further violation of rights. Otherwise, a contractual penalty will be assessed.

AfD Regional Head Bystron: “Defamation of the AfD as ‘Right-Extremist’ is a Violation of Rights”

“This is a great win for the AfD and an important precedent,” said the Bavarian AfD regional head and Bundestag candidate Per Bystron of his party’s successful implementation of a cease-and-desist order against the Federal Republic of Germany. “The Republic was forced to give in and submit to our demands. This much is clearly established: Defamation of the AfD as ‘right-extremist’ is illegal.”[1]

“When authorities are misused in a partisan fashion to propagandize against an opposition party, the responsible parties must be legally put in their place. We will not waver from this logical, constitutional path.”

The party’s Jörg Meuthen and Frauke Petry had another success at the Hessian Higher Administrative Court, which ordered the removal of a Facebook statement by Peter Feldmann, the mayor of Frankfurt am Main. In March, the SPD politician had written of an event planned by the Economic Club of Rhein-Main with the AfD chair, Petry: “AfD? DISINVITE!” The decision is legally valid.

To be sure, the AfD faced a cease-and-desist order itself. The Amadeu Antonio Foundation took offense at a statement by AfD lead candidate Alice Weidel. Commenting on the riots at the G20 Summit, she said: “It is absurd that a government family ministry directly and indirectly — for instance by way of the Amadeu Antonio Foundation — should co-finance left-extremist terrorism under the rubric, Battle against the Right.” Weidel, however, said: “I am not signing this cease-and-desist order.”

Addressed on the subject of his party’s several lawsuits, AfD spokesperson Christian Lüth said: “We have to defend ourselves constantly against hostility and slander.” Attorney Höcker said: “It is just the fact that AfD annoys a lot of people.”

37 thoughts on “AfD to the German Government: Cease and Desist With the Term “Right-Extremist””