Before dawn this morning I heard the liquid climate change pounding on the roof, but by the time I got up, we had passed through pelletized climate change and entered a phase of powdered climate change. So, at the moment, it looks like we probably won’t lose our electricity.

There are four or five inches of snow on the ground, and it’s still coming down hard. NOAA says it will continue this way all day, so there will be nothing to do but make hot drinks and watch the whiteout through the windows.

Last week, when the temperature rose into the 60s (c. 18°C) and the remains of the earlier blizzard had almost entirely melted away, I thought we were done with all this nonsense. Oh yes, I know readers in Norway and Finland are probably laughing at us for being paralyzed by such trivial amounts of snow, but you’re at what? 60°N? 62°N? We’re at 38°N, for crying out loud! In other words, further south than Lisbon, Naples, and Athens.

This is supposed to be, as Wallace Stevens put it, “the end of winter when afternoons return.” Instead it looks like this afternoon will be pretty dim and powdery.

Below is the “world of white and snowy scents” on the grounds of Schloss Bodissey, out by the gnarled old Pawlonia tree: 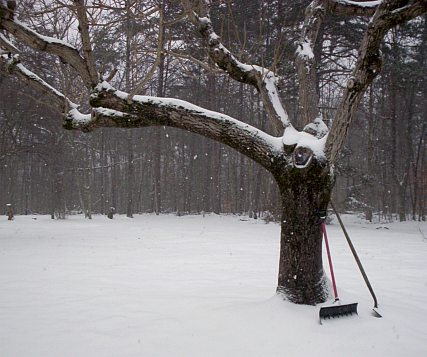 Wallace Stevens’ poem is quite appropriate for a day like today. For those who are interested, it is reproduced in its entirety below the jump.

The Poems of Our Climate
by Wallace Stevens

Say even that this complete simplicity
Stripped one of all one’s torments, concealed
The evilly compounded, vital I
And made it fresh in a world of white,
A world of clear water, brilliant-edged,
Still one would want more, one would need more,
More than a world of white and snowy scents.

There would still remain the never-resting mind,
So that one would want to escape, come back
To what had been so long composed.
The imperfect is our paradise.
Note that, in this bitterness, delight,
Since the imperfect is so hot in us,
Lies in flawed words and stubborn sounds.