I came across a batch of old photos that had been lost for a decade or two. Here’s one of me from the summer of 1968: 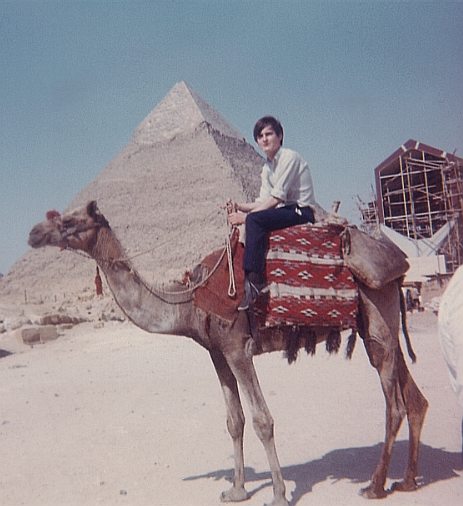 That trip to Egypt was the thrill of my brief lifetime back then. I had always been a devoted aficionado of archaeology, so visiting Giza, Luxor, and the Valley of the Kings was a dream come true.

This was the year after the Six-Day War, and they still weren’t too fond of Americans in Arab countries. However, I was bundled in with an English tour group that was passed through passport control en masse — so no problem.

We had to visit Israel after Egypt, Lebanon, and Jordan, and not before, so that we wouldn’t have any Israeli-stamped documents when we went to the Arab countries.

After a particularly hot day in the sun of Luxor, I gave in to temptation and drank a glass of ice water poured from a pitcher in front of me on the dining table. Big mistake! I was horribly sick with Tutankhamen’s Revenge most of the time we were in Beirut.