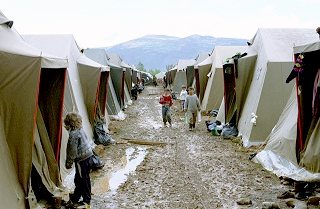 Hungary has become a magnet for illegal immigrants from the Third World, and is currently experiencing its own landlocked “Camp of the Saints” moment. Culture enrichers are currently pouring into Hungary from all over Africa and Asia, but they are simply using the country as a transshipment facility, en route from Serbia to Austria. Once inside Austria they will have access to the entire Schengen region — the fabled land of milk and honey for refugees throughout the Third World.

Hermes has translated three articles from Hungarian news sites about the most recent incursions of illegal immigrants. On one night earlier this month in the province of Csongrád, an illegal was apprehended on average every fifteen minutes.

The first article was published on April 26 by Index.hu:

112 illegal immigrants in just one night

Illegals were caught every quarter of an hour last Friday morning in the southern part of the province of Csongrád. The police detained 112 immigrants.

They had never before caught so many illegals in just one night. The work of the police was actively supported by the infrared camera network, as well as by the local guard and local citizens.

The illegals — the majority of them males — came from eight countries, the bulk of them from Pakistan. After being caught, almost all of them applied for refugee status. Since the beginning of this year more immigrants have been caught in the province of Csongrád that during the whole of last year.

Illegals trying to reach the Schengen zone from Serbia are frequently caught in Csongrád. The majority of them come from Afghanistan, but immigrants from Sudan, Burkina Faso, Nigeria, Senegal and Ivory Coast are usually also among them.

According to the statements by Afghans, it is rather easy to reach the Hungarian border, but the almost hermetically sealed outer border of the Schengen zone is almost impossible for them to cross. Dozens of refugees hope to find a secret forest path, but they become disappointed when facing reality.

The next article was posted on Sunday at Hirado.hu:

Police “fished out” a drowning immigrant in Mórahalom

Police and local guards caught 57 illegals in the last 24 hours in Csongrád. One of them had to be pulled out from a water channel by the agents, otherwise he would have drowned, according to a spokesperson from the provincial police headquarters on Sunday.

Szenti Szabolcs explained that late Saturday night they spotted with the help of infrared cameras five men walking on the Serbian side towards the Hungarian border. The agents went for them, and when the illegals crossed the border, they told them to stop.

The five men began to run, and two of them jumped into a channel connected to the Madarász Lake in order to escape from the agents. One of them climbed out some meters away and ran on, but his companion could not come out of the neck-deep water. The man began splashing and drowning, and in the end he sank, but one of the agents had enough time to grab his backpack and pull him out. Thanks to the quick reaction of the agents, the 33-year-old Mauritanian national had no problem other than just a fright.

Among the illegals was a pregnant woman from Kosovo. The medical check showed that both the woman and the baby were healthy, the spokesperson said. But a 20-year-old Kosovar man was taken into custody because it was the third time that he tried to enter the Schengen zone. He gave fake personal data to the agents after being caught, so he was detained for falsifying personal documents.

The majority of the 57 illegals applied for asylum status. Since the beginning of this year more immigrants have been caught in the province of Csongrád that during the whole of last year.

Finally, from yesterday at OkosNet:

Illegal immigrants (caught) in many places in the country

24 illegals and a people-smuggler were caught last weekend in the province of Győr-Moson-Sopron, the spokesperson from the regional police department said on Monday.

Kálmán Gabriella said that last Sunday a 44-year-old Hungarian national living in UK and driving a car with a British plate number was caught at the Austrian border pass of Hegyeshalom carrying six African nationals. The passengers — 4 from Ivory Coast and 2 from Mali — could not show valid papers allowing them to enter Austrian territory.

The spokesperson added that they also caught 14 foreigners on trains or at railway stations. Two Afghan and two Kosovar nationals were caught at the railway station in Sopron. They tried to get to Austria without legal papers. Seven foreigners — four Kosovars, one Cuban, one Moroccan and one Pakistani — were taken off the train heading for Austria. Kálmán Gabriella also said that four Pakistani nationals were found in a taxi from Budapest at the Hungarian-Austrian border. Two of them had refugee papers; the other two identified themselves with papers valid only for the territory of the refugee camp of Debrecen.

A legal procedure was initiated by the police against the 21 foreigners for attempting the illegal border crossing.

8 thoughts on “One Illegal Immigrant Every Fifteen Minutes”