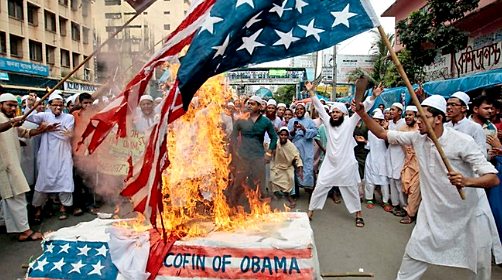 Over the past fifteen years or so, Muslim leaders throughout the world have expended vast amounts of time, energy, and expense promoting the concept of “Islamophobia”. The Organization of Islamic Cooperation (OIC) has been particularly zealous in its proposals and initiatives aimed at stamping out Islamophobia wherever it may be found.

Yet here we are, just two years away from the dénouement of the OIC’s famous Ten-Year Plan, and the eradication of Islamophobia seems as distant a prospect as ever. The Danish Cartoon Crisis did not have the desired effect. Despite the best efforts of Secretary General Ekmeleddin Ihsanoglu, non-Muslims across the globe continue to mock, insult, defame, slander, and speak negatively about Islam.

The problem with the concept of “Islamophobia” is that it implies a mental illness. Mocking or criticizing Islam is held to be a psychological problem, like Obsessive-Compulsive Disorder or Bipolar Disorder. Those afflicted by the disease are to be pitied, and not hated. Treatment is surely warranted, and will most likely be covered by Obamacare, the NHS, and other healthcare bureaucracies among the Western democracies.

Unfortunately for the OIC, the therapeutic approach is a time-consuming one. It takes a long time for the modern iatrotechnical industry to swing into action — new treatments and medications must be devised, tested, approved, and rolled out before the eradication of the disease can begin. Ten years is far too short a timeframe for such a process.

There are signs that the Islamic world is becoming impatient with infidel recalcitrance, and is anxious to move on to a new phase: treating hostility to Islam as a criminal offense to be handled through an international judicial body. No more coddling of Islam-critics, as if they were schizophrenics or depressives — it’s time to round ’em up and bring ’em to justice!

The OIC and its affiliates have clung to the “Islamophobia” brand — perhaps out of inertia, or perhaps to avoid the considerable costs of rebranding — but all that may be about to change. Three recent articles point to a new mode of thought within the Ummah, among both Sunnis and Shi’ites.

First, from the Turkish Salafist mouthpiece Today’s Zaman, which reports on the efforts by Secretary General Ihsanoglu to implant a “hate crimes” apparatus at the UN:

Organization of Islamic Cooperation (OIC) Secretary-General Ekmeleddin İhsanoğlu has called for an international early warning system against discrimination and intolerance towards religions by establishing an observer office within the Office of the High Commissioner for Human Rights (OHCHR) of the United Nations.

Participating in an international meeting in London at the invitation of the British Conservative Party’s Co-chairman and minister without portfolio Baroness Sayeeda Warsi on Tuesday, İhsanoğlu remarked on the struggle against intolerance towards religions. High-level officials from Italy, Germany, Pakistan, Canada, Egypt and the US also attended the meeting. Underscoring that intolerance and discrimination against Muslims are gradually increasing, İhsanoğlu warned that the problem may become a global issue by affecting other religions. “The world is under the threat of terrorism and people are provoked to hate, discriminate and be violent, which cannot be overlooked. If this were to be the case, every person in the world can be in danger,” said İhsanoğlu.

İhsanoğlu stated that an observer office was established to follow hate crimes due to Islamophobia by the OIC and the Foundation of European Security and Collaboration (AGİT). He stressed there is a need for another observer office to track intolerance and discrimination against every religion on the international level.

To achieve that, he called for the United Nations Human Rights Council (UNHRC) to reach a consensus by putting its decisions into practice for combating discrimination against individuals on the basis of religion or belief. He added that certain incidents such as the burning of the Quran and films such as “Innocence of Muslims” had raised the level of Islamophobia.

For the Shi’ite perspective, consider this piece from the official Iranian media outlet PressTV (emphasis added):

An Iranian lawmaker has urged Muslims worldwide to consolidate their unity, saying the so-called advocates of human rights have plotted an “organized attack” to destroy Islam and Muslim countries.

The so-called advocates of freedom have never launched an assault on any religion as intensely as they have on Islam, Mohammad-Ali Esfanani, the spokesman for the Majlis Legal and Judicial Committee said on Sunday.

“The only attack which has been carried out in an organized fashion is the one against Islam and Muslim countries,” Esfanani said.

He added that the enemies seek to instigate violence wherever there is a trace of Islam such as in Syria, Iraq, Palestine, Afghanistan, Lebanon and Myanmar and this shows that their main goal is to harm Islam and Muslims.

The Iranian lawmaker further censured the performance of the Organization of Islamic Cooperation (OIC), saying the body has practically failed to play a role in the international arena.

The Iranian legislator emphasized that the OIC and its member states must come to the belief that any plot in any Muslim country would not be in the interests of themselves or other Islamic countries and would only be a conduit for the influence of foreign powers in that country.

He added that creating conflicts among Muslims is the enemies’ strategy to counter Islam.

Esfanani further called for the establishment of an independent international Islamic court to examine all cases of genocide, moves against humanity and blasphemous acts against Islam’s holy figures and values.

An independent Islamic court — a sort of sharia version of the ICC — sounds like something that would be dear to the UN’s scabby old bureaucratic heart. And punishing blasphemy against Islam would be one of its three major missions.

Finally, the role of Egyptian President Mohamed Morsi seems to be converging with other threads of the same trend. Egypt is assuming the presidency of the OIC, Cairo is hosting the next Islamic summit, and Mahmoud Ahmadinejad will be in attendance.

Egyptian President Mohamed Morsi is set to host the 12th summit of the Organization of Islamic Cooperation (OIC).

Since 1969 the OIC is the second-largest inter-governmental organization, after the United Nations, with 57 member states. The summit sees the participation of all member states, including the attendance of Iranian President Mahmoud Ahmadinejad who takes part in the summit for two days as chairman of the Non-Aligned Movement.

The issues discussed during the 5-day summit relate to the challenges faced by the Muslim world. Specifically, leaders hope to work out an international law strategy that will help combat religious intolerance against Muslims.

According to the OIC Secretary General Ekmeleddin Ihsanoglu, the leaders of Islamic nations need to have a new approach for dealing with the threats of Islamophobia.

Leaders will also address the Syrian crisis and the Palestinian cause, as well as the situations in Afghanistan and Somalia.

During the summit Egypt assumes presidency of the OIC for the next three years.

It looks like the next few weeks — or even the next few days — will be replete with new opportunities for the ambitious leaders of the New Caliphate.

Egypt is in the throes of seemingly unquenchable mass violence. Syria is nearing collapse after two years of civil war instigated and bankrolled by the Western democracies. Pakistan is teetering on the brink of a Taliban-style theocracy. Iran is close to the deployment of nuclear weapons.

And Ahmadinejad is coming to Cairo.

We live in interesting times.

For previous articles about Ekmeleddin İhsanoğlu and the Organization of Islamic Cooperation, see the OIC Archives.

13 thoughts on “Beyond Islamophobia”