Note: Takuan’s post (which was originally published last night) is to remain at the top for a while, so I made it “sticky”. However, much has happened since it went up, including the Blogger outage. Scroll down for a report on that.

More new posts will be added below this one. Oh, and don’t mess around with JIM.

The essay below is the conclusion of the ninth part in a series by Takuan Seiyo. See the list at the bottom of this post for links to the previous installments.

The Bee and the Lamb
Part 9 (continued)

A Whole New Road to Serfdom

That Which is Not Seen (continued)

For over 60 years, White mea-culpists have had a firm grip in all fields of cultural mind imprinting: education high and low; paper media, then electronic, then digital media; all forms of entertainment, the plastic arts and music high and low, and religious instruction and worship too. Their main endeavor has been to enforce their compulsory (e.g. K-12) and discretionary (e.g. television) self-flaying on account of long-ago Slavery, Colonialism, Imperialism, Male Supremacism, Racism, Antisemitism, and so on.

It’s the evils of feudalism and industrial workers’ exploitation in Europe and America, but not the strict Confucian evils of Northeast Asia. There, a member of the ruling class in China had, essentially, a free hand with anyone of the lower classes, a Japanese samurai could test his sword by cutting down an insolent peasant, and farmers were so squeezed by their fief holders that they habitually sold their daughters to bordellos for the few coins it provided for next season’s seed.

Feminism, Socialism and anti-Antisemitism should have arisen in Saudi Arabia or Yemen, Algeria or Peshawar, for good reasons. Instead, aggressive White androphobes of all genders which I can no longer count are decimating the philogynous and egalitarian West. Equality psychos are tearing down the most egalitarian society that ever existed (except for initial communist experiments, before they turned bloody). American Jews, at the apex of the greatest fortune and philosemitic tolerance their long diaspora has ever bestowed on their kind, are busy supporting all the ideologies and policies that demolish their safe harbor and build up their Muslim, Black and Third World enemies. They will come to rue their tacit assumption that better the antisemite you don’t know than the few hundred imputed and real ones catalogued at ADL.

One would be hard put to find a nation not based on the invasion of another people’s territory and their mass slaughter. Yet poisoned American madmen proclaim “No Thanks for Thanksgiving” as though the Indians themselves did not fight endless genocidal wars from Peru to Canada, with torture, ritual murder or slavery for the captives and, at times, cannibalism too.

Leftoid masochists and the Christian meek call for returning Hawaii to the Hawaiians and capitulating before a massive Mexican reconquista of one-third of America. The self-defined “Feminist-Tauist-NeoPagan-Post-Structuralist-Deconstructionist-Socialist” useful idiot Gillian Schutte begins her New Year 2013 Dear White People by “wholeheartedly apologizing for what my ancestors did to the people of South Africa and inviting you to do the same.”

Yet the Magyars don’t seem to feel much guilt over the Illyrians, Pannonians, Sarmatians and Celts whose land and lives they took in the 9th century, to form Hungary. The rightful Etruscan landowners are not bearing angry placards in front of the Vatican. The Japanese are not planning to relinquish Hokkaido to its original owners, the Ainu. The tall, white and fair-haired Chachapoyas of the Andean forest have, alas, no remnants left to sue the Incas for genocide in a Peruvian court of law. The Aztecs, whether in Jalisco or Los Angeles, don’t agonize over having taken what would become Mexico City from its original Culhuacan owners, with lots of grisly details. Yet for 38 years Neil Young has been reminding adoring audiences about “Cortez the Killer”, discreetly omitting Tlacaelel the killer and the killer people whom Cortez killed.

Hitler’s Willing Executioners: Ordinary Germans and the Holocaust (1996) is a book by Daniel Goldhagen presenting the thesis that the German nation as such was composed of willing executioners of the Jews because of a unique “eliminationist antisemitism” in the German people, with long historical roots. However, even that great moral abyss of Western civilization — the Holocausts — stands out more in its industrialized and organizational features than it does either in the quality of its hatefulness or its relative or even absolute volumes. And Holocausts they were, for in addition to the nearly 6 million Jews, the Germans also murdered over 21 million civilian Slavs, and that’s counting Russia, Ukraine, Poland, Lithuania, Belarus and Czechoslovakia alone.

In absolute numbers, the total number of World War II non-German civilian victims of Nazi Germany is smaller than the 50 million victims of the Bolsheviks in Russia, or Mao’s 70 million in China, or the Mughal-Muslim genocide of Hindus — the latter have their own Holocaust Day on August 14.

In relative numbers, in just one year, 1994, the Hutus and Tutsis in Rwanda, killed off a total of one million, in a population of 7 million. 75% of the Tutsi population was erased. Is it more humane to go by a stroke of a blunt machete than by a whiff of Zyklon B?

The Khmer Rouge murdered at least 2 million Cambodians between 1975 and 1979: one quarter of the population, by a conservative count. Is it more humane to die by wallops from a Cambodian pickaxe handle than by a bullet from a German Mauser?

Inscription on the back (in German): “Ukraine 1942, Jewish Aktion, Ivangorod.”

There is a special horror attached to the Third Reich, because those were 20 th century Europeans, Christians, and in many ways the smartest, most civilized people on Earth. But the Holocausts do not prove that Whites are worse than other people, just that they are no better. The history of the Third Reich also proves that with the right formula of economic blowup, misery and humiliation, sparked by charismatic evil, no people are immune to such horror, at no time.

And that includes the here and now. Unaware that history that occurs first as tragedy repeats itself as farce, the Rulers of the West have cooked up a potion with similar ingredients to those of 1930s Germany, complete with an imported Semito-Turkic minority that Europeans have far fewer reasons to like than they did the previous, semi-indigenous Semitic minority once living among them. What’s missing are hyperinflation and the evil genius. But not to worry — they are working hard on “quantitatively easing” and “prime pumping” the hyperinflation into being. And hyperinflations have a way of unearthing evil geniuses too.

All that while thinking that they have run away from Hitler as far and as fast as is humanly possible, having roiled from Berlin to Brisbane 24/7 for 50 years to find the fascist in every White and the evil in every facet of Western tradition.

Hence the loud guffaw reverberating through the cosmos.

The early Church Father and martyr, Cyprian of Carthage, was witness to the smallpox pandemic that devastated the Roman Empire in the second half of the third century. The pandemic is known as the Plague of Cyprian, because he described it in the consoling missive to his congregation, De mortalitate, i.e. “On the Plague.” At its height, the plague killed 5,000 people a day in Rome alone and, according to Cyprian, no house in Carthage was without its victims.

It’s the irony of recurring human folly that the powers that be and the mob in Carthage blamed the Christians for the plague and unleashed murderous persecutions against them, just as the Christians would blame the Jews for the bubonic plague a millennium later, and kill them by the hundreds of thousands across the continent, from Spain to Lithuania. [1]

The task of science in epidemic etiology is to find and isolate the cause. Only then can the cure be devised. With respect to the Western brain rot that I call acute cognitive spongiform encephalitis, a small group of academics in the 1950s-60s was “patient zero.” What the homosexual Canadian flight attendant Gaëtan Dugas was with respect to the spread of AIDS, they were with respect to multiculturalism, “diversity,” demonizing the white race, extolling the barbaric and inferior as long as non-white, rewriting history, white population replacement, Islamization, “justice and equity” (with mutations such as “environmental justice”), celebration of loose sex and of deviant sexuality, demonization of men and masculinization of women, sabotage of the West camouflaged as love of Gaia, and the conversion of the entire Western gestalt from amalgamated Christianity and Enlightenment rationalism to a fanatical secular religion replete with totems and taboos, manifest lies, forbidden truths, hallucinatory mandates revealed to chosen prophets, and persecution of apostates. 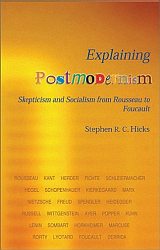 The American philosopher Stephen Hicks has traced this causal chain superbly in his Explaining Postmodernism: Skepticism and Socialism from Rousseau to Foucault.[2]

Hicks traces the roots of postmodernism to Rousseau, Kant and Heidegger, but we shall examine just five of the post-1950 main branches: all university professors of major renown. Of the four academics whom Hicks credits with originating postmodernism — Michel Foucault, Jean-François Lyotard, Jacques Derrida, and Richard Rorty — we shall look next at Foucault and Derrida. Then, the father of the postmodern New Left, Herbert Marcuse, whom Hicks also covers in his book. Finally, two chief Anglophone spreaders of the pox in the realms of history and literary criticism: Howard Zinn and Edward Said.

All of that, and all of these, have been mutations of Marxism, just as the successful virus absorbs and adapts to the body’s defenses and then finds a new avenue of attack that circumvents the body’s immune system.

This perception is of significant operational implication. To cite just one of some twenty major plagues now bedeviling the West, it implies that the advanced Islamization of Western Europe and the creeping one of the Anglophonic diaspora cannot be combated by arguing about the history of Islamic imperialism, the wiles of taqiyyah or the evils of sharia.

Islam and Muslims are not the lethal disease. It’s the West’s postmodern Marxism-soaked universities that are the lethal disease, and the generations of their programmed graduates who are now the Ruling Class of the West. Without them, Muslims would have been back where they were in 1955 — in Sanaa and Fallujah, Islamabad and Jawhar, but not in Houston, Melbourne, Amsterdam and Cologne. Islam would have still had its supremacist dreams, but dormant and subdued — for Muslims, in their own native milieus and dealing with a self-confident, rational West, would have had other things to worry about than how to make the World Khalifate come true. In fact, a sort of tenuous friendship could have existed between the West and Dar-al-Islam, the way it existed between mid 19 th and mid 20 th centuries. 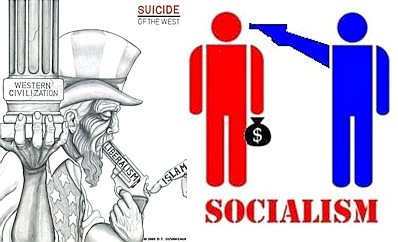