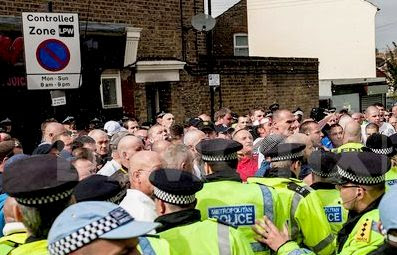 The following official complaint was filed yesterday with the IPCC, the body that fields complaints against the British police, by an EDL supporter who attended last Saturday’s truncated EDL demonstration in Walthamstow. The complainant was kettled along with the rest of the EDL for eight hours, handcuffed, “arrested”, and then released.

We need dozens (hundreds, even) more complaints like this one. If you were kettled at Blackhorse Road on Saturday like this gentleman, please consider filing a formal complaint.

I wish to make a formal complaint against the Metropolitan Police in regard to their behaviour, policing style and methods, and general actions on September 1st, in particular regard to their ‘kettling’ operation at Blackhorse Road underground station, resulting in a clear breach of Article 5 of the Human Rights Act (HRA), and consisting of Unlawful Detention, amongst several other legal breaches.

I am contacting you by way of an official complaint (and I trust that you will respond informing me that you are treating it as such) in order to give you an opportunity to remedy the situation without the need for a costly and time-consuming court action, or the need to instruct a solicitor so as to obtain Full Disclosure from yourselves as to the thinking that led to this complete failure of the Metropolitan Police. However, I reserve the right to take this matter up with my solicitors should you fail to respond in an appropriate and reasonable manner to the opportunity hereby given to you.

As you are no doubt aware, on September 1st the Metropolitan Police, after losing control of a violent counter-demonstration to an agreed English Defence League (EDL) march in Walthamstow, East London, first held EDL marchers for approximately two hours, with no access to toilets, medical facilities, food, water, or rest areas, outside of Walthamstow Magistrates’ Court (a court building with all these facilities), while they tried, and failed, to contain the violent counter-demonstration. Amongst those held in these conditions were at least one pregnant woman, and an elderly gentleman with leg injuries who had lost his medically-required foot covering during an assault by counter-demonstrators, and had been forced to walk for about thirty minutes on his bare foot. He was told, several times, that his foot-covering would be returned to him if he just kept going. It never was, and no replacement or medical attention was offered or given, a clear breach of the Disability Discrimination Act (which requires any reasonable action that can be taken to assist a disabled person to be taken; there were several dozen police vehicles within twenty yards of him at all times, but no offer for him to sit in one of these was made, nor any First Aid from the various First Aiders present in the police ranks was given) as well as the basic Duty of Care. Finally, after conceding that they could not effectively police the counter-demonstration, the EDL marchers were asked to return to Blackhorse Road underground station, where we were told our coaches would be waiting to take away those demonstrators who had travelled from outside of London, while the remainder would be put on a train and removed from the area. This was agreed to, with no protest, despite the obvious failure of the police’s tactics on the day to prevent violence, damage to public and private property, or to allow an agreed rally to take place.

After another hour-long trek back to Blackhorse Road underground station, heavily delayed by the repeated failure of the police operation to prevent groups of violent counter demonstrators to block the route and attempt, at several points, to attack the march, throwing eggs, bricks and bottles, the police decided not to allow anyone to board a train. This was initially announced to be because the police were waiting for the EDL coaches to return, and all EDL members would then be moved out of the area at the same time. Again, marchers agreed to this with no violence on their part, although regular phone calls from friends in the area and twitter updates on various sites showed that large-scale disorder was continuing in the surrounding area, and a large part of it was fuelled by the fact that the EDL was still in the borough, this being seen by the more violent and less restrained elements amongst them as a provocation and as an ‘EDL rally’.

After approx thirty minutes, the coaches arrived, and were promptly ordered away by the police. Numerous requests were made to the police to be allowed to leave, under escort if required, either on the coaches or on the train (the station by this time being open and in use). This was refused.

There is little point in listing a blow-by-blow account of the almost eight hours that we were detained at Blackhorse Road. A few edited highlights should be enough:

I feel that the above more than clearly describes a fundamental failure of policing on behalf of the Metropolitan Police (by which I mean those who organised the event, if the word ‘organised’ can be applied to such a shambles and failure to deal with the events of the day; by far the majority of the rank-and-file police officers there behaved admirably, were given no more information than the EDL members, and several were visibly distressed at what they were being asked to do, more than one officer actually telling people, myself included, that they should put in a complaint about the tactics being used. Only a small minority of police on duty that day tried to provoke people by laughing and abusing them verbally, and nobody that I saw rose to their bait) and a clear breach of Article 5 of the HRA.

I am aware of the recent (May 2012) European ruling which declared ‘kettling’ to be a legal act, but I would like to remind you that this was only by a majority decision, not unanimous, and even the majority set out very specific limitations and restrictions for when this tactic was to be used. In this situation, very nearly every single one of them, if not all of them, has been broken. In summary:

I look forward to your early, and full, response, so we can see where we go from here,

7 thoughts on “Institutional Incompetence from the Metropolitan Police”