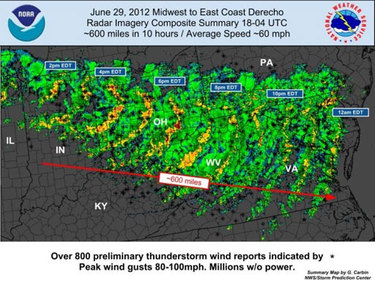 Call us the vagabonds: survivors of a relatively rare meteorological event that I hope not to see again in a hurry. Or rather, it’s rare around here. Evidently these aren’t so uncommon in the Midwest, but out there the terrain is quite different. This one began in Indiana and ended up, I believe, on the shores of the Atlantic.

To say that it was sudden is an understatement. I’d been watching the weather radar and could see the long band of storms stretching north to south. What was strange about this one was the wind. I had the “storm tracking’“ feature clicked on and the high winds reaching out ahead of the storm were like long tongues, flicking eastwards a hundred miles or so ahead of the band of weather. I also had on the feature that permits you to see the number of storm cells and their directions. New cells were forming all the time and growing more severe. A few were labeled “tornadic thunderstorms” or “mesocyclonic thunderstorms”. Uh oh.

I quickly opened a blogger window to warn y’all we were probably going to be out of commission for a while and as soon as I started, the lights began flickering…

…The lights went out so quickly. The wind — no rain — was LOUD and intense, but it didn’t seem to be a tornado. I had to lash down what I could on the front porch before it got any worse — probably a dumb move but my dumb luck allowed me to get back into the house and latch the storm doors. I could feel some pressure so I opened cross current windows enough to let them blow through — it was sooo hot and dark; that wind felt good, even if it wasn’t the usual cooling wind of summer thunderstorms in Virginia.

A “super derecho” of violent thunderstorms left a more than 700-mile trail of destruction across the Midwest and mid-Atlantic on Friday, cutting power to millions and killing thirteen people.

More than 600 damaging wind reports were received by NOAA’s Storm Prediction Center (SPC) as the derecho took roughly 12 hours to race from northern Indiana to the southern mid-Atlantic coast.

A derecho is defined as a widespread and long-lived wind storm that accompanies rapidly moving showers or thunderstorms. The most severe derechos are given the adjective “super.”

Winds gusted to 91 mph (equal to that of a category 1 hurricane) at the Fort Wayne International Airport, Ind., Friday afternoon.

As the derecho maintained its violent nature, an 81 mph gust was then measured at Tuckerton, on the southern New Jersey coast, early Saturday morning.

Downed trees dominated the damaging wind reports and led to the deaths of 13 people, according to Fox News.

That’s what had me — and millions of others — in its grip. Ignorance was bliss at that point since I was literally and figuratively in the dark.

That’s when I lost my sense of direction in the dark. I waited for lightning flashes to illuminate the way but even with that, I managed to trip over a chair before I reached the safety of a flashlight.

Next, the phone, to let the Baron know what was happening and to warn him he probably faced a rough ride home the next morning. While watching the storm I could see it extending to the District of Columbia. I assumed, since he was attending the ACT! for America conference and schmoozing with legislators, wherever he was had back-up generators and he might not even be aware of what was happening outside.

No phone. Dead line. Oops. That was almost unheard of. I vaguely remembered another time during an intense snowstorm but that was almost past the limits of memory. In short order this “sandstorm” moved off and the wind dropped to calm. I could hear chain saws up on the road, about a half mile as the crow flies, so I knew someone was working on a downed tree. Country people often just cut the tree where she lies; they don’t wait for the government to come remove it — they have places to go. And lots of them carry chainsaws in bad weather around here. No, they don’t fool with trees on downed electric lines; they turn around and find another way home.

Unlike most storms, this one brought no change of weather in its wake. No rain, no perceptible respite from the heat. I called outside for the cat, who’d gone to ground wherever she goes when the storms catch her out of doors. Her coat was dry. Not knowing what to expect next, I took her inside and left her with food and shared some of my bottled water.

My small computer — the netbook — had a good charge. At least I could read, d.g. So I poured out some of that distilled water and mixed it with isopropyl alcohol to make a cool rubdown. I read an ebook on current affairs, and longed for a fan….

…when I woke up at daylight the next morning, the phone was working again so I called the Baron and warned him about what probably lay in wait for him on his trip home. At the very least there would be downed trees and few traffic lights. “Expect delays,” I told him. “And please stop and get a motel room ahead of time when you find a place with electricity. I think they’re going to go fast.”

Derechos typically strike the lower Midwest states once every year, according to the SPC. The occurrence of derechos, however, [is] quite rare across the mid-Atlantic, south of Philadelphia. On average, this region endures a derecho once every four years.

One of the most recent significant derechos to slam the United States occurred on May 8, 2009. These weather phenomena traveled more than a thousand miles in 24 hours from southeastern Kansas to the southern spine of the Appalachian Mountains.

Destruction from the May 2009 derecho totaled millions of dollars with numerous injuries and several deaths reported.

One main difference between the May 2009 derecho and Friday’s is the number of tornadoes spawned. Forty-five tornadoes were sighted in May 2009, while there was only one unconfirmed report of a tornado on the ground in Newcomerstown, Ohio, Friday afternoon.

Winds in the strongest derechos can top 100 mph. The derecho that tore through Wisconsin and Lower Michigan on May 31, 1998, produced a 128 mph wind gust in eastern Wisconsin.

I’ve worked off and on with the homeless so I know how difficult it is to be perched in a place not home, waiting for things to get better. Somehow that knowledge isn’t helping right now. The heat has left me exhausted, even with being able to able to rest in an air-conditioned room.

Pity the poor Baron, cut off from Command Central up in his office. The editing and programming work awaits the return of power. Except for brief times when he’s been going somewhere, Gates of Vienna is the center of his days’ and months’ and years’ work. The newsfeed program is locked inside those now-stilled computers, unable to rumble and spit out the news items everyone sends…

The heat will continue for at least another week, and no one knows when the power will return. Crews from Georgia are working with our usual electric co-operative’s employees. Plus local guys. But even the co-op’s website showing the points of darkness is offline, as is their automated response system. When I called there was simply a sad, rattled recorded voice to this effect:

Yes, we know. No, we have no idea when power will be restored.

7 thoughts on “Echo of the Derecho”