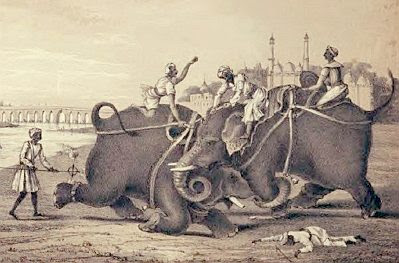 Our electricity came back on sometime early this morning, which is not bad, considering. A lot of people in Virginia will be without electric power for several more days, possibly even a week.

Dymphna and I struck camp before checkout time at the motel, and by lunchtime had re-established Schloss Bodissey as our primary residence.

But this is a HOT schloss out here in the tropic hinterland of Central Virginia. Having electricity doesn’t mean that we have air conditioning — it simply means that we can run the fans again. It was about 82°F (28°C) in the downstairs when we got home. We put the three fans in the windows and delayed the worst for a while, but by the middle of the afternoon it was about 100°F (38°C) outside, and 94°F (34°C) up here in the eyrie.

The part required to fix our heat pump was scheduled to arrive today, but the distribution center for the supplier is in Lynchburg, and much of Lynchburg is still without power. The parts warehouse is electronically locked, so that no one can get inside when the electricity fails.

In other words, we will get no meaningful relief until sometime tomorrow, and possibly well after that. The weather forecast calls for a low tonight of 70°F (21°C), and we will blast as much of that inside as we can with the patented Bodissey Three-Fan Wind Tunnel System.

Last week, before the tropical daze set in, I attended the ACT! for America National Conference and Legislative Briefing in Washington D.C. The event spanned two days and three evenings, and was well worth the time. The roster of congressmen who spoke to us on Thursday was an extensive cross-section of some of the most stalwart opponents of sharia in the House of Representatives.

Elisabeth Sabaditsch-Wolff was there in her role as the ACT chapter leader for Austria. On Thursday and Friday she and I visited several congressional offices to brief the representatives and their staffs on the suppression of free speech in Europe and the current dire situation for European dissidents.

I’ll report in more detail later on about those visits, as well as on the conference proceedings.

Needless to say, work piled up to an enormous height while I was gone, especially given that my return was delayed for several extra days. I’ve started to work my way through the emails, but it will take me at least until tomorrow before operations return to something like normal.

Expect a news feed later on tonight. If my keyboard doesn’t melt in the meantime, that is.

One thought on “Tropical Days”