We’ve reported in the past about Imran Firasat, the apostate from Islam who now lives in exile in Spain. His petition to ban the Koran in Spain has aroused the ire of Islamic zealots both in Europe and in his home country, Indonesia.

The campaign against him has escalated to the point where the lives of his children are being threatened. Below is a report from MinutoDigital, as translated by our Spanish correspondent Hermes:

Islamist threats increase against Imran Firasat and his family

The tireless fight started by the apostate Imran Firasat against totalitarian Islamic ideology has begun to create problems for this citizen with political refugee status in Spain, and also for his children living in Indonesia.

Because of its undeniable informative value, we reproduce the letter from Imran, and the copies of the complaints he filed, and the threats he received from Muslim organizations. In spite of the gravity of the situation, the Spanish authorities did not pay much attention to him, a fact which he reports in the following document:

“I am Imran Firasat from Madrid. Since I arrived in Spain, for six years I’ve been receiving death threats and intimidation involving possible physical aggression from Muslims for opposing the violent ideology of Islam and exposing Mohammed’s filthy character. In recent years I filed various reports with the police and the courts. Up until now I did not pay much attention to the threats.

But now that I’m receiving death threats about my family directly from some Islamist groups in Indonesia, I decided to go to the police on May 13, 2012. At first instance, the police officer told me that I did not need to file the complaint because I did it on occasion before. I told him, “Look, this threat was addressed to my children and I’m very concerned because I received it from an Islamist group in Indonesia called “Majelis e Ulema Indonesia”.” Well, that day the police agent filed my complaint but without allowing me to mention the content of the threat I received: 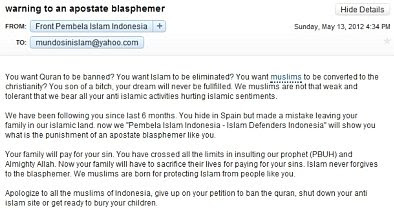 Next day I received another threat from Indonesia, from an Islamist group called “Front Pembela Islam”, and in this threat they explicitly mentioned the killing of my kids living in Indonesia. I was very worried, and went to the police again on May 16 to tell them about this and file a complaint, but surprisingly enough, I was treated rather badly. They told me that they will not file the complaint because they did it the other day, but then I asked them about the correlation with the complaint filed the other day, because this threat comes from a different group, a very radical Islamist group. They told me that they will kill my family unless I stop fighting against Islam and apologize. But the officer rejected filing my complaint and told me that of course Islamists threaten me if I pick on them. But in the end he unwillingly agreed to file my complaint after I told him that it was his duty, otherwise he would be violating my rights, and that I would bring the issue to the interior ministry. But as you can see from the first and the second scanned complaints, there’s not much difference between them. The second is just the same as the first, only slightly modified.

When I asked the officer on what I should do in order to get police protection, he told me that I will not get any protection because it’s none of their business if I pick on Islamists. I asked him which would be the solution to secure my and my family’s integrity, and he answered that I should close my site and stop bothering Islamists. After having filed my complaint, the officer-in-chief told me strictly to stop coming and filing complaints because it’s my fault if I pick on Islamists.

In conclusion, I want to say that according to the police, my actions against Islamism is not a struggle against terrorism and radicalism, but according to them it’s just bothering Islamists. Besides this, they suggested me to close my site and stop talking against them.

Is this the way we’ll win against Islamism? They discouraged me instead of appreciating my struggle. Is this the way that we’ll keep on dreaming of a radicalism- and terrorism-free world, when our own authorities discourage us?

I only say that I don’t care who supports me and who leaves me alone, I’ll keep on fighting till the world gets free from Islamism. I cannot convince anybody to join me but neither can I be forced to stop unveiling the filth of Islamism and make the west wake up to the threat of a growing Islamism.”

[See the original Spanish article for facsimiles of the complaints, and a larger screenshot of the email message.]

7 thoughts on ““Get Ready to Bury Your Children””