The following report from Germany examines the use of jihad songs (“nasheeds”) and videos produced by Islamic radicals to recruit “youths” for jihad. Many thanks to Hermes for the translation from SWR.de, and to Vlad Tepes for the subtitling:


Deso Dogg / Abu Maleek:
“Sheik Osama, the most magnificent martyr in the world!” 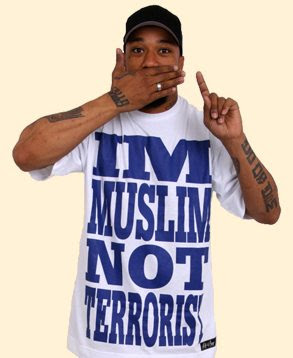 Hermes has prepared a transcript of the video in article format:

‘We have chosen, we have already long ago chosen Allah and his Messenger, and the life after death.’

‘No fear, no fear, come back subhanALLAH (I verily absolve Allah from all evil), no fear from the kuffar, (chorus) Allahu akhbar, Allahu akhbar.’

‘I will fight till the last breath. I proclaim: no one can stop me except Allah.’

‘Nasheeds can have a radicalizing effect on young people when they are exposed to them, or on youngsters who are ready to ultimately follow this radical logics propagated by them, or also in those who are in certain emotional situations.’

Frankfurt Airport, March 2. A young man shot two American soldiers to death. One of them was on his way to a mission in Afghanistan. The suspect shouted ‘Allahu akhbar’ – Allah is great. His name is Arid Uka. He was radicalized in a very short time via the Internet. Shortly before his action, he implicates himself with an Islamic song, a so-called ‘nasheed’. Its title: ‘Mother, remain steadfast’.

‘I most go now, tomorrow it would be too late. Mother, remain steadfast, your son is in jihad’

The singer: Mounir Chouka, a German who moved to the border between Afghanistan and Pakistan to wage holy war. He calls others from there to follow his path. These nasheeds come from the propaganda division of the terrorists.

‘Ultimately it’s about deciding in a very professional way how one reaches the targeted groups in other countries, e.g. Germany, and nasheeds are used to accomplish very specific goals.

But this jihadist is not the only nasheed singer the terrorist from Frankfurt admired. Just a few weeks before his action, Arid Uka wrote on Facebook, using a nickname: ‘Abu Maleek, I love you by Allah!’. Who is this Abu Maleek?

He is an ex-rapper, formerly known as Deso Dogg. He became a radical Islamist. He can be found on the Internet praising Osama Bin Laden. Openly, in Germany, and addressing youngsters.

‘Sheik Osama, the most magnificent martyr in the world, Sheik Osama, you are a star and an unfathomable one.’

Shortly after his death, Osama Bin Laden is depicted as a hero. Jihadists spread their radical messages through nasheeds. Just as the Salafists, who want to impose the law of Allah just as it was in times of Mohammed.

How strong is the influence of jihad-singers like Abu Maleek on youngsters?

Goetz Nordbruch is a researcher on Islam. For years he has been engaged in the issue of Islamic youth culture.

Looking for clues in Wedding-Berlin. Muslims meet here for Friday prayers in the As-Sahada mosque. It is a meeting point for Salafists. We want to speak with the youngsters. But this request is not welcome here.

But we keep on trying. As we heard, the nasheed-singer Abu Maleek appears often here.

‘How do you find Abu Maleek?’

‘Who do you find? Abu Maleek?’

Clearly, the singer of nasheeds finds followers here. C. Schmid is the head of the Office for the Protection of the Constitution in Berlin. She sees a fairly new trend.

‘We’ve been observing for a time now an increase of war-nasheeds in German which specifically seek to appeal to youngsters and are an introduction to the Salafist-jihadist ideology, and this is alarming.’

More videos like this circulate on internet. This singer from the Rhein-Main region seems to have no particular respect for democracy.

‘Am I a mujahideen? Yeah, man, that’s what I am! And the Islamic state is long ago overdue! Because sharia is mandatory for all Muslims! Whoever doesn’t accept that, for sure go to hell!’

‘He calls not to jihad, but he preaches the Islam of the seventh century, and so he preaches a view of the Islamic community completely segregated and opposed to the majority of the population, and this is of course problematic.

Even children are being taught nasheeds. This video shows Salafists in Kassel. They sing ‘Ghuraba’ – the foreigners. A traditional song about Muslims as chosen ones. But which is their intention with this here in Germany?

The Islam-expert Klaudia Dantschke spends a lot of time studying the new propaganda of the radical Muslims, nasheeds like ‘The Foreigners’.

‘With this nasheed one can teach children that they are not a part of this society, and to make them be proud that they are actually foreigners in that society. Because if you are a foreigner, then you are on the right way to paradise.’

To paradise in the name of Allah – messages, which just as in the case of Arid Uka, can lead to disastrous consequences.

One of his favorite singers, Abu Maleek, has meanwhile become the key figure in the nasheed scene. In a seminar in 2010, he was fawned over by prominent preachers from Salafist circles.

‘In this way, Deso Dogg was lifted up from that filth to an upper level so that this young man will in the future sing nasheeds, and this is Salafistic, legitimated in our movement.’

And so, in an Islamic seminar with prominent preachers of the Salafist scene, Abu Maleek calls unashamedly for holy war in countries like Afghanistan. ‘We fight, we fall shuhada (martyrs), the enemy in the eye bismillah (in the name of Allah), Allahu Akhbar, Allahu Akhbar!’

Fighting in the name of Allah. The messages of Abu Maleek find here acceptance.

Is Abu Maleek also partially responsible for the events in Frankfurt? As a matter of fact, the public prosecutor is investigating him for public incitement.

We wanted to talk with Abu Maleek. We found him by chance in his district, in Berlin-Kreuzberg.

‘Abu Maleek, only one question!’

He doesn’t react to our call. A Abu Maleek’s friend comes towards us to protect him.

‘Leave him in peace!’

‘I just want to ask a question’

‘Yes, but he doesn’t want… he does no more rap. He is one of my brothers, you know, I do not want you to bother him. He has given up rap, nothing more; he is clean. Nothing more, just prays.’

‘Do you find that good?’

4 thoughts on “Nasheeds for Allah”