Gellerupparken, a culturally-enriched suburb of Aarhus in Jutland, has featured prominently in several previous articles about immigrant violence in Denmark. Our Danish correspondent TB sends his translation of an article about a former apologist for Islam who woke up to the reality of the Religion of Peace while living in Gellerupparken.

This story from B.T. is not new — October 2011 — but it’s a real beauty, if you ask me. First of all because it lies right in the footpath of the recent articles I have translated about Vollsmose, but also since this article is about a former Multi-Culti Pro-Islam Front Fighter (he was actually the Vice President for The Multicultural Society) who suddenly realized the hard way that he had in fact been fighting for the devil. Now he has turned 180 degrees, and become a fierce Islam-critic.

Another ‘funny bonus’ to this one is the update appended by B.T. at the end of the article. It’s a sure bet they (the journalists) must have been busy that day answering phone calls from angry ‘undressed’ Muslims. I guess they might even have felt a little uncomfortable. You never know what these peaceful new arrivals from exotic countries might do if they are not obeyed…

And the translated article from B.T.:

Vice President for The Multicultural Society has turned 180 degrees

Was stoned out of Gellerupparken: “Now I know Islam!” 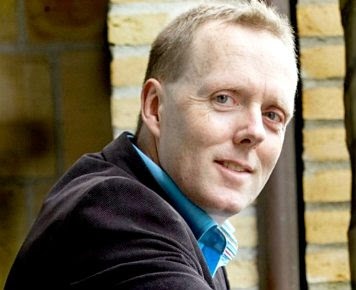 [Photo caption: Dan Ritto was formerly pro-Islam and was even the Vice President of the Multicultural Association. Today he has turned 180 degrees in his attitudes toward religion, after he — by his own admission —learned what Islam is all about. (Photo: Brian Rasmussen) ]

Six years ago Dan Ritto was the Vice President of the Multicultural Association. Today he is a cynical Islam-critic.

Something flies past his face and hits the ground a few feet in front of him. In a brisk pace he continues towards his apartment. Yet another object passes and lands close to his feet.

He picks it up and studies it in the dark. Then a stone hits his jacket, and he understands what is going on. Someone is throwing stones at him. Someone is trying to stone him out of Gellerupparken.

“I was so puzzled about it. People also began to yell at me when I walked in the area, and I understood absolutely nothing about it. Then I thought to myself that I had to learn more about Islam. So I read the Koran.”

It’s late in the year 2007, and Dan Ritto is living in Gellerupparken.

He left off studying to be a Catholic priest in London and began a ‘career’ as a keen debater and blogger with several blogs about society, politics and religion.

Based in Gellerupparken he started actively working with integration. As the Vice President of Multicultural Association, he had a lot of contacts in the notorious ghetto area of Aarhus.

Back then, when eating in the Bazar Vest, Muslims usually stopped by and talk to him. They regarded him as one of their own. Today, five years later, he no longer lives in Gellerupparken.

Its been a long time since he resigned from the Multicultural Association. He is still an active commentator and blogger, but today Dan Ritto has turned 180 degrees. He has become an Islam-critic. Why? Because he now knows Islam, he says.

Puppets for the imams

“When I came to Gellerup, I had the attitude towards religion that it is all about being a good person. And I also took for granted that when you live in Denmark, you live under applicable laws. You accept the system.”

“I knew nothing about Islam at all, but I was one of those guys who people joined when sitting in the Bazar Vest [culturally enriched shopping center]. Gradually I realized through conversations that Muslims don’t want to be part of a society where the law is equal for all and where there is no difference between being Muslim and not being a Muslim. At first I thought it was a joke. But, quietly, I understood that they really meant it,” says Dan Ritto.

A few months before someone threw stones at him, riots flared in Gellerupparken.

A group of youngsters were ravaging the area, setting fire to cars and buildings and in almost constant conflict with the police. Here, Dan Ritto discovered something that really put his pro-integration view in perspective.

“When the imams said that the youngsters would soon calm down again, that’s what the youngsters did — again, funnily enough. They simply sat there and controlled the play. With that kind of behavior the police work becomes quite a challenge” he says.

One night he is attacked. It repeats itself a few times and now he become aware that someone wants him out of Gellerupparken. And little by little he also realize why.

“I had written an op-ed in a paper where I stated that Islamophobia is caused by the Muslims themselves [because the kids were throwing stones, etc. — translator]. It was not my intention to be hostile. On the contrary, it was actually meant in the most friendly manner, since I was really positive at the time. Many Muslims know that these things happen, yet they say nothing. I wanted them to stand up and say: ‘Not in my name’. And so that was what I wrote” he says.

What Dan Ritto did not understand was that he — by writing these things — had expressed doubt about Islam. And that he really shouldn’t have done.

“Suddenly I was out expressing doubts. And then anything can happen. But I did not understand any of this at the time. So I decided to read the Koran. After that it was easy, and I drew the conclusion that Osama bin Laden was of course right. He did exactly what Mohammed said he should do. Waged war against the infidels. Convert or be killed.”

Dan Ritto stares at the horizon for a long time.

“In the beginning I thought that this would never come to Denmark. It would never happen here. But it does. About a third of the population in Gellerupparken favors it. Believing that religion should be above the law.”

Today B.T. was contacted by several persons who deny Dan Ritto’s assertion that the Koran directly calls for war and terror against non-Muslims. In this connection B.T. would like to clarify that the opinion expressed by Dan Ritto is his and his alone. These views are Dan Ritto’s own account. His statement can therefore NOT be taken as an expression of either BT’s general position or the actual contents of the Koran.

19 thoughts on “Waking up to Reality in Gellerupparken”