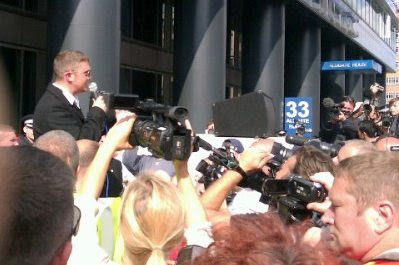 Tommy Robinson has gone on a hunger strike in his new place of residence, Bedford Prison. According to Luton Today:

THE leader of the English Defence League, Stephen Lennon, is on hunger strike and is claiming to be a “political prisoner of the state”, following his arrest after a protest in London on Saturday.

Mr Lennon, who also calls himself Tommy Robinson, was remanded in custody at Luton Magistrates Court this morning (Monday, September 5) after appearing charged with breaching bail conditions imposed on him by Blackburn Magistrates Court, where he is due to go on trial on September 29.

The trial relates to an EDL protest in the Lancashire town on April 2, during which it is alleged he assaulted a man, a charge he denies.

In response to an enquiry from Luton Today, EDL spokesperson Helen Gower said: “Tommy is on a hunger strike and will only be accepting water.”

She added: “He is now a ‘political prisoner’ of the state and isn’t prison food halal, something which Tommy feels very strongly about and campaigns against.”

Mr Lennon addressed EDL members in London on Saturday after travelling to the event disguised in a beard and hat, which the Jewish Chronicle website said was intended to make him look like a rabbi.

A Bedfordshire Police spokesman said he was arrested yesterday afternoon after going to Luton police station by appointment.

The EDL had been banned from marching through Tower Hamlets by Home Secretary Theresa May, and instead held a protest near Aldgate Tube station.

One thought on “Tommy Robinson on a Hunger Strike”