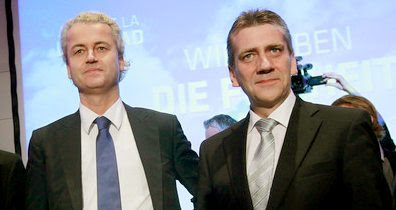 Our British correspondent Paul Weston was one of those invited to the Freiheit rally in Berlin on Saturday. Below is his brief account of the day’s events.

Clone These Men!
by Paul Weston

A year after the launch of René Stadtkewitz’s Freedom Party, Berlin found itself again hosting the potential saviour of Germany as he prepared for the elections to the Berlin Senate on September 18.

The hall was filled with some 700 supporters who had come to hear not only Stadtkewitz but also Geert Wilders and the charismatic Oskar Freysinger.

In his opening speech Stadtkewitz captivated the audience and reminded them that far from being a one-trick anti-Islamist party, Die Freiheit also represented the Euro-sceptic arm of German politics. He proceeded to lay waste to the fantasy world of Angela’s Merkelonomics by stating “no more bail-outs” and calling for an end to Germany’s exposure to European third-world debt.

Stadtkewitz further commented that Thilo Sarrazin’s bestseller “Germany destroys itself” had been read by 1.5 million people and its principles supported by some 50 million plus Germans. This flies in the face of elitist German opinion, as demonstrated by Angela Merkel, who despite not reading Mr. Sarrazin’s book was not slow in describing it as “not helpful.” 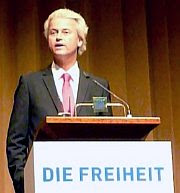 Having demolished the current political elite thinking, Stadtkewitz sat down to a standing ovation and was followed by Geert Wilders, whose speech encompassed the genuine democracy of small nation-states, the totalitarian leanings of the European Union, and the cultural relativism that denies indigenous Europeans their cultural heritage. He reiterated the need to support the sole democratic state in the Middle East, which is of course Israel.

One of Wilders’ closing points was to reaffirm the importance of freedom of speech in these peculiar times, tested only seconds later by two Antifa specimens, who were soundly thrashed verbally by the audience and Mr. Wilders. The latter pointed out the irony, not perhaps lost on the renegades, that freedom of speech, despite their best efforts is still alive and well in Berlin. To round off his speech, Wilders made the pertinent point utterly lost on his leftist foes that freedom of speech is the main armory the right currently if we are to avoid another Breivik-style atrocity, bearing in mind that Anders Breivik considered the democratic process no longer open to him.

Enter Oskar Freysinger, who with a mixture of hard facts, comedic delivery, and a tremendous stage presence held the audience in the palm of his hand. He explained that the Swiss franc was not strong, but the European Union monetary policy could best be described as Greek. Freysinger went further and described the freedoms Switzerland’s constitution allowed vis-à-vis the thoroughly democratic process of referenda, such as enabled the banning of minarets in 2009. Here was a classic example of people-power and democracy in action, contrary to the top-down edicts of the totalitarian EU commissars.

Although it was not supposed to be the Freysinger Show, Oskar stole it adeptly, showing what can be achieved through personality and politics. Europe needs many more characters like Freysinger, who is wasted on a functioning democracy such as Switzerland.

We hold out the highest hope that Stadtkewitz, Wilders and Freysinger clones will make themselves apparent in the very much undemocratic states which currently comprise the European Union.

In closing, it must be noted that those Germans who believe in a genuine democracy have only one political party available to them and that is Die Freiheit and René Stadtkewitz.

3 thoughts on “Clone These Men!”