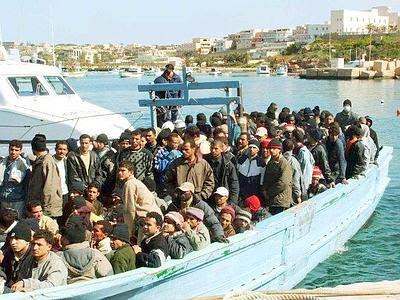 Four sub-Saharan Africans died off the coast of Algeria last week in an attempt to reach Lampedusa. Nine others were rescued from certain death by the Algerian coast guard.

I’ll have more on this story later on in this post, but first the news on the latest arrivals in southern Italy.

413 culture-enrichers have landed in Italian territory since my last update, which is not enough to warrant raising the temperature on the Cultural Enrichment Thermometer. However, it brings the year-to-date total to just over 55,000.

Not all of the new refugees landed on Lampedusa. A group of Afghans — probably transiting through the Balkans and crossing the Adriatic — landed at Salento, in the heel of the Italian boot.

31 Afghans Picked Up After Landing in Salento Area

(AGI) Lecce — Thirty-one Afghans who landed illegally on the Salento coast have been picked up by carabinieri and finance police. According to the migrants they arrived aboard a large rubber dinghy that sailed from Greece.

Meanwhile, 95 Tunisians were rescued off Lampedusa:

(AGI) Palermo — Another boat of immigrants has made landfall on Lampedusa. 95 Tunisians, including 2 little girls, reached Lampedusa during the night after being rescued at 30 miles from the island by a Guardia di Finanza patrol boat. All the migrants were transshipped on another Guardia di Finanza ship because the boat adrift had an engine failure which made it impossible for it to continue its course.

Later in the week there were 287 arrivals on Lampedusa in three separate boats:

Three Boats With 287 Migrants Landed on Lampedusa the Night

(AGI) Lampedusa — A total of 3 boats carrying 287 immigrants, including many women and children, reached Lampedusa during the night.

While all those refugees were arriving safely in Italy, others were dying in their attempt to cross. The tragedy occurred off the coast of Algeria, where illegal departures for Europe are less frequent than in Tunisia and Libya.

ANSAmed posted accounts of two separate incidents, each of which involved two deaths. The first incident occurred on September 13:

(ANSAmed) — Algiers, September 13 — A short distance away from the coast of the city of Bejaia on a boat adrift at sea, the Algerian Coast Guard found the bodies of two men who authorities believe were trying to reach Italy. According to initial investigations reported on El Watan’s website, the men were part of a group of immigrants who were trying to reach the beaches of the island of Lampedusa in the middle of August. There is no news of the other 15 “harragas” (the name in North Africa for people who try to illegally leave the country) and they are officially considered missing by the Algerian authorities. The Algerian authorities have managed to identify the victims by checking the memories of the mobile phones found near the two dead bodies. They are two young men, a 22 year old and a 25 year old, from Marsa (in the province of Skida) and Annaba.

Their family members have already been called to the morgue in the hospital in Bejaia, where the bodies were taken for official identification. The group reportedly left on August 17 in the middle of Ramadan (quite an irregular circumstance) from the deserted beach of Guerbez in the province of Skikda. Since then there had not been any news about the immigrants. A likely hypothesis is that the boat had a malfunction when it was already miles from the coast. There is practically no hope of finding the missing people from the group alive, a source told El Watan. In recent days another three bodies have been found at sea, but it does not look like there is any connection between the two findings.

In a similar incident on the same day, but at a different port, two more bodies were found, but nine harragas were rescued:

(ANSAmed) — Algeria, September 13 — The bodies of another two irregular immigrants attempting to reach the Italian coast have been recovered from the sea by Algeria’s coast guard, close to the trading port of Téne’s. According to a report by el Watan, the bodies are of two black Africans, probably from sub-Saharan countries. Their estimated ages are between 30 and 40 years.

Ahead of an official identification, the bodies have been transferred to the mortuary of Téne’s hospital.

In the meantime, news has arrived that on Saturday, nine “haragas”, all of them very young and originating from rural Talassa communities (of Chlef province), were rescued at sea from a certain death by the coast guard. They were travelling on board an improvised vessel and as the first rescuers report, were in a condition of serious malnutrition and were already dehydrated.

Having undergone first aid treatment, the nine were questioned by a public prosecutor who will decide whether charges should be brought against them (illegal migration is a criminal offence in Algeria).

The El Watan newspaper points out that Talassa is one of the poorest areas in the country and apart from its underdeveloped condition, it has also been the scene of terrorist activity.

3 thoughts on “Camp of the Saints: Death Off the Coast of Algeria”