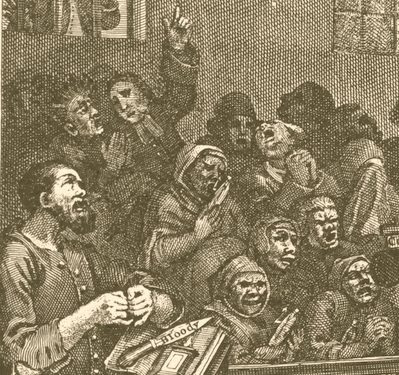 As I have mentioned previously, one of major goals of the Organization of Islamic Cooperation (OIC) is to stop “Islamophobia”, which is its preferred term for the criticism of or opposition to Islam by non-Muslims.

The word “Islamophobia” is of relatively recent coinage. I never encountered it until after 9-11, and it was subjected to widespread ridicule, at least among non-Muslims and non-leftists, when it first became widely known. However, after the OIC and the UN harped on it for a few years, and the progressive media solemnly repeated the Muslim party line, “Islamophobia” gained general currency as a serious, scholarly word for a dangerous mental deficiency that needed to be eradicated in the West.

It piggybacked its way into politically correct usage on “homophobia”, which in turn drew on the word “xenophobia” as its ideological predecessor. Strangely enough, “xenophobia” is not in my Shorter Oxford Dictionary on Historical Principles, but appears in my Oxford Dictionary of English Etymology. The word is not terribly old; it was coined in the late 19th century during a period when many mental disorders were first being labeled with Greek neologisms. Based on the Greek word for “fear”, a “phobia” was the general term assigned to conditions of morbid fearfulness. “Hydrophobia”, for example, was used to describe a morbid fear of water. The stem “xeno-” means “strange” or “foreign”, and “xenophobia” was originally synonymous with “agoraphobia” — it meant “a morbid fear of open spaces”.

It wasn’t until the 20th century, with its new preoccupation with race, that “xenophobia” was assigned its current meaning: “a morbid dislike or dread of foreigners”. In the second half of the century, after the racial ravages of National Socialism, any distaste for foreigners or preference for one’s own kind was stigmatized as “xenophobic”. This shunning helped pave the way for mass Muslim immigration into Western countries by transforming opposition to such policies into a mental disorder.

Half a century later, the “xenophobia” precedent has helped legitimize its stepchild “Islamophobia”, which does similar service in stigmatizing any resistance to Islamization.

So much for the pedigree of the word “Islamophobia”. We know its function: to delegitimize the opponents of Islam by transforming their political opinions into a mental illness. And not just a neutral mental illness like obsessive-compulsive disorder or schizophrenia, but an evil sort of lunacy, for which one should be committed to an asylum for the criminally insane.

If the OIC achieves its goals, and Islamophobia is outlawed in the West, lawmakers, bureaucrats, and the police will require guidelines about the ways in which this ugly disease manifests itself, so they can recognize those who suffer from it and assign them to a secure facility for treatment. DHS will need to write up a handbook for its local agents describing what to watch out for. Federal and state legislators will need a clear definition of the word to include in the laws they pass against it.

So what is Islamophobia? What’s a good working definition of the word?

Fortunately, someone has already done the hard work of laying out the concept in detail. And, needless to say, the defining was done by Muslims themselves.

The following article, “A Proposed Definition of Islamophobia”, was written last year by a European group called the European Muslim Initiative for Social Cohesion (EMISCO), an umbrella organization of Muslim NGOs from all over the continent.

Even though it was composed from a European perspective, this definition is probably similar to what will be used in the United States when required. I’ll go through it by sections, bolding phrases and sentences that merit further discussion:

Islamophobia is a form of intolerance and discrimination motivated with fear, mistrust and hatred of Islam and its adherents. It is often manifested in combination with racism, xenophobia, anti-immigrant sentiments and religious intolerance.

Notice that this lead paragraph presupposes an understanding of what is in the mind of an Islamophobe. It assumes that opposition to Islam must be motivated by fear and hatred. It excludes the possibility that opponents of Islam may be motivated primarily by rational self-interest, rather than angry passion.

The text does not specify it, but one may assume that EMISCO’s definition denies the existence of any other motives for opposing Islam. It is simply considered impossible that any non-Muslim could inform himself about the scriptures, teachings, and laws of Islam, read the history of Islamic expansion, observe the behavior of Muslims in his own time, and come to the reasoned conclusion that Islam is a dangerous political ideology that has degraded and impoverished every society in which it has become dominant.

Such rational conclusions cannot be drawn. The possibility of doing so will be defined out of existence. “Fear”, “mistrust”, and “hatred” are the only acknowledged motives that anyone could have for opposing Islamization.

Manifestations of Islamophobia include hate speech, violent acts and discriminatory practices, which can be manifested by both non-state actors and state officials.

“Hate speech” is already well-established as a stand-alone crime in Europe, but in the United States it must accompany a “violent act” or other statutory crime before it can be prosecuted. Perhaps the intention here is to help it become a crime by redefining the scope of “discriminatory practices”, which are already illegal in the USA.

This seems to be the general tactic being pursued by Hillary Clinton and the State Department in their consultations with the OIC — to identify those who oppose Islamization as “discriminatory” as they engage in their “defamation of religion”.


Islamophobic rhetoric associates Muslims with terrorism and portrays them as an international and domestic threat. It makes stereotypical allegations about Muslims as a monolithic group of people whose culture is backward and incompatible with human rights and democracy.

Here we have a familiar theme that is often used by Islamic interest groups to deflect any criticism of Islam. Those who associate Muslims with terrorism are making “stereotypical allegations”. This assertion ignores the possibility that “stereotypical” statements about Muslims may be true, as a statistical assessment of the behavior of Muslims.

If I say that cows are revered under Hinduism and protected from harm, is that a “stereotypical allegation” about Hindus? Of course not; it is a simple statement about the practices of most Hindus.

In the case of Islam, it is true that the vast majority of Muslims do not commit terrorism. A somewhat smaller majority do not provide logistical or financial assistance for terrorists. An even smaller majority — possibly even a minority, depending on which surveys are consulted — disapprove of the actions of Islamic terrorists.

What percentage of those who commit, support, or approve of terrorist acts is too large to be acceptable? What percentage is small enough to be tolerated?

This is a discussion that cannot be engaged in, under the strictures that define “Islamophobia”.

As for “backward and incompatible” — these characteristics can also be statistically determined. By their fruits ye shall know them.

Other examples of Islamophobic rhetoric in political discourse, the media, schools, work place and in the religious sphere involve, but are not limited to:

As you can see, the above list includes — in somewhat cartoonish terms — many of the arguments that are used in this blog and other forums that oppose sharia and the Islamization of the West.

In “restricting visibility and practices of Islam in public space”, countries like France are simply enforcing the secularity of the public space, which is considered an integral characteristic of the country’s laws and culture. Muslims insist that an exception must be made for them; that they are different; that their religion requires public displays. Thus we must comply with their own laws and accommodate them.

Why must we do that?

Those questions cannot be answered, or even discussed, because to do so constitutes Islamophobia.

Many Muslims are most emphatically unwilling to “integrate” — they proclaim that fact openly, and their imams preach against integration in their sermons. To point this out is to state a simple fact, one that is backed up by ample evidence. The “demographic time-bomb” would be less of an issue if Muslims were willing to integrate.

Anyone who objects to his own culture being gradually supplanted by an alien and hostile culture is therefore Islamophobic.

The “racialisation of the ‘Muslim category’” is an important strategy — it helps turn criticism of Islam into the legal equivalent of racial discrimination, which will help the campaign to make “Islamophobia” illegal in the United States.

Acts of Islamophobia, which can be committed by non-state actors or state officials, include:

“Physical attacks” are already against the law in all countries. There is no need to add an “Islamophobic” category of assault, except to further the exceptionalism of Islam, as required by sharia.

“Racial/religious profiling measures” are virtually non-existent in almost all Western countries, so the issue is moot. Islam has already won that skirmish.

“Discriminatory immigration and naturalization procedures” are an inherent right of all sovereign nations. To deny that right is to remove the sovereignty of nations, and make them part of the Ummah.

Institutional Islamophobia is state policies and systematic practices discriminating Muslims [sic] based on their religious identity. It poses a serious threat to the security of Muslims because such policies and practices can lead to spreading bias, and therefore be a fertile ground for hate crimes

In order to combat Islamophobia and foster tolerance and mutual understanding based on the international human rights standards, States should:

To implement “comprehensive educational strategies” means to enforce sharia-compliance in schools, training programs, and all other forms of public instruction.

To create “specialized bodies and initiatives” to evaluate and monitor eruptions of Islamophobia means to grant the demands for sharia, since only Muslims may judge the behavior of non-Muslims concerning Islam.

To “record, monitor and maintain reliable information and statistics about Islamophobic hate crimes” means to augment the existing surveillance state for the purposes of enforcing Islamic law.

To “combat Islamophobic hate crimes… in the media and on the Internet” means to enforce the tenets of sharia concerning Islamic slander, and restrict free speech accordingly.

To “increase international co-operation” means to allow the UN — which is already pushing sharia-compliance with respect to the “defamation of religion” — to override any legal impediments to sharia within its member states.

In other words, this is all about enforcing sharia on Muslim and non-Muslim alike.

The end of the article lists the supporting organizations:

When considering EMISCO’s definitions and recommendations, think back on what Secretary of State Clinton said last month in Istanbul.

Remember the OIC’s stated intentions concerning Islamophobia, as stated in its foreign ministers’ resolution and its annual “Islamophobia Observatory” report.

Notice also that the UN Human Rights Council has already fallen into line with the OIC by passing Resolution 16/18, which Mrs. Clinton was touting in Istanbul.

EMISCO’s definition is just part of a larger mosaic. It represents one strategy within a concerted push by the Ummah, acting through the OIC and various other affiliated bodies and their compliant Western counterparts.

Islam means business when it comes to eradicating “Islamophobia”. Thanks to the enormous wealth wielded by the petro-sheiks, the fecklessness of our leaders, and the somnolence of ordinary Westerners, the OIC is well on the way to achieving its goal.

Don’t think it can’t happen here in the USA. Hillary Clinton is dead set on it. If Barack Hussein Obama gets re-elected next year and manages to appoint a Supreme Court justice or two, all bets are off.

6 thoughts on “What is Islamophobia?”