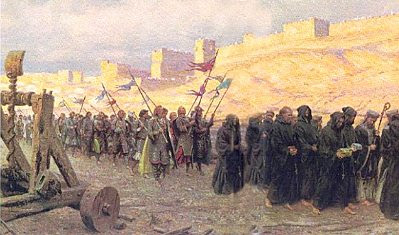 Here we are at Day Three of our Spring fundraiser and I’m feeling… confused. I’ve written a few — too few — acknowledgements to our first-day donors. This is unusual since the first day usually finds me full of energy for this task, one which will continue until all our donors have received a response.

So why the slow-down so early? Well, for one thing, I’ve been peeking ahead to look at the messages people put on their donations. Not everyone does, but each person who includes a note gives me a clue about himself. Even the first one for this time around, from a faithful Dane, sounded just as I imagine him: “Cheers!” is all he said, but I could picture a glass of snaps to go with it. The Baron says he really is like that in person.

Many of you add encouraging notes about our work (which is really the Baron’s work these days, plus the amazing contributions of our guest posters). My work is mostly confined to cooking and keeping up with email when I’m able to sit here. The cooking is an absolute necessity; if I didn’t fix meals the Baron would live on peanut butter, cheese and chocolate. He’ll fix omelets on occasion, but mostly he wants and needs “jump-in-your-mouth” food that he doesn’t have to think about. Keeping the blog going and freelance editing takes up very long hours for him. Exercise? Mowing the lawn and digging holes at my request. You know how gardeners are always moving things…

So today I fixed supper for us and answered some correspondence and responded to a few donations. But mostly I was reading the notes of the donors from yesterday and today, and thinking about how I came to be here “knowing” so many people who share our concerns about the way the world is going.

One of our most frequent givers usually has witty messages accompanying his gift. I laughed out loud the time I read “For Cheese Doodles”. That note was especially funny because we can’t eat them, but also for my own personal history reasons: when I was a child I once ate myself sick cramming Cheese Doodle after Cheese Doodle into a small body not used to junk food. On that occasion my mother had taken me to New York City to visit for a week with her aunt and uncle. The latter was the Irish Consul General to NYC, and they’d invited mother and me to come up. I remember the popovers that didn’t pop and my great aunt’s dismay; being perpetually hungry, they seemed fine to me. I also remember crying bitterly over the helium balloon that got away from me in Central Park. But mostly I remember being left to my own devices at a party given in my mother’s honor. So many grown-ups talking at one time! And talking so loudly to be heard over one another and over the small orchestra playing in the next room.

I remember standing next to the table covered in damask linen. Maids in black dresses weaved through the crowd with trays of drinks, but none for me. So I listened to the music while looking over the things on the table. The large bowl full of bright yellow-orange blobs attracted my eye. Bravely, I put one in my mouth and it was love at first bite. The texture, the crunchy sound when I bit down, the color and taste! I was in heaven as I worked my way methodically through that bowl. No one noticed. What adult with a martini ever looks over at a bowl of Cheese Doodles? What adult ever looks down at the small hand reaching for them?

I no longer remember how I ever got under the table to deposit those Doodles as they made their way back up, but that’s where I was when my frantic mother found me, my hands and arms colored bright orange up to my elbows, not to mention the orange overcast to my very green face. She told me later that even my freckles had a green hue.

Somehow I was washed and put to bed. I fell asleep listening to the orchestra being drowned out by a sea of murmuring voices. And I woke up still loving Cheese Doodles, though it would be a long time before I tasted another one.

Today, our witty donor noted that his gift was to be used for “cheerleader uniforms”. Again, I burst into laughter; he’d managed to push my personal history button again… I can picture these nubile young women — though probably not as vividly as the Baron can. They’d have skimpy crimson skirts and white shirts that read “Crusaders” across the back and a picture of the Gates on the front. Then I remembered that “Crusaders” was the name of all our sports teams in high school (need I say it was a Catholic school? I’ll bet they’re not crusaders anymore). But cheerleaders for Gates of Vienna is indeed an excellent idea, one that bears contemplation even in cyberspace… who knows what might come up?
*   *   *   *   *   *   *   *   *   *   *   *   *   *   *

Today a reader asked about the origins of our blog:

Glad to hear you enjoyed your trip and I’m glad Mr. Wilders’ got a taste of good old Southern hospitality, which he must have enjoyed, too.

Lately, I’ve been trying to find out more about how conservative blogs came into being, as in Gates of Vienna’s case: how you made the decision to start the blog, how you decided to design it, etc. I’ve searched the archives but haven’t located anything. I can’t even get to the first post, where, presumably, you announce GoV’s inception.

Have you ever been interviewed about your experiences with GoV? It would be interesting.

This is one of my favorite blogs because it deals with hot button issues, while at the same time, you all come across as extremely nice people. This in contrast to the shark tank ambience of some other blogs…

Oh the shark has pretty teeth dear,
And he shows them pearly white

Always loved that play. Cyber sharks have made me a better swimmer on the occasions I do venture into these waters.

…as to our origins, they go back to 2004. I think this may be our first post. Before that, I’d been writing a blog on my own, one I’d deleted before we decided to start Gates of Vienna. The name for our blog was his idea — his A-Level study of European history stood him in good stead there. He chose his nic from a Jack Vance novel; this was an inside joke for Vance readers since BB is never actually on stage in those stories. People simply refer to him. The Baron also suggested my name. He knew I liked the idea of Saint Dymphna and how her life story fit in with my former work with abused families. Not to mention her protection for lunatics, of which I am decidedly one. I loved the idea of using her name, though having the “Saint” appellation had already been taken.

It was also the Baron’s idea that keeping up a blog might help me with my grief over my daughter’s death. I’d found The Belmont Club and was delighted to read someone who thought like I did, but who wrote so lucidly. Wretchard remains the model. Funny thing was, I somehow knew that the name of his blog referred obliquely to the town of that name in Massachusetts. I lived just a short distance from there for years and was often in Belmont visiting relatives. Wretchard, on the other hand, was living a scholarship student’s life; slim pickings in a boarding house while he attended Harvard.

My comments at Belmont Club were beginning to be too long. And it was hard to stay on topic when Wretchard’s analyses created such new lines of thought. At any rate we were taking up more bandwidth than courtesy really allowed, and the Baron was right in thinking that a blog of our own, something we did together even though he was gone for much of the week for his job, would help ease my grief. It certainly was graphotherapy, as Buddy Larsen, a fellow commenter at Belmont put it. He has a new identity now, but he’s that same old Scandinavian wit he always was. And he’s still active at Wretchard’s place, which has long since moved to Pajamas Media.

The Baron’s met a lot of people we’d only read when we started this blog. I asked him if there was anyone he’d be excited to meet now. He told me he’d gotten over his “famous people” idea, and that the thrill of meeting Fjordman still remains a high point for him.

We’d both still like to meet Wretchard. The thing is, you can tell by his writing style that’s he’s an introvert just like the Baron. So every time I picture such an encounter, it’s the two guys just standing there while I babble into all the empty places…

Here’s all the places everyone came from today to give to Gates of Vienna.

Australia, Denmark, Israel, the Netherlands, and the UK

What a generous group y’all are!