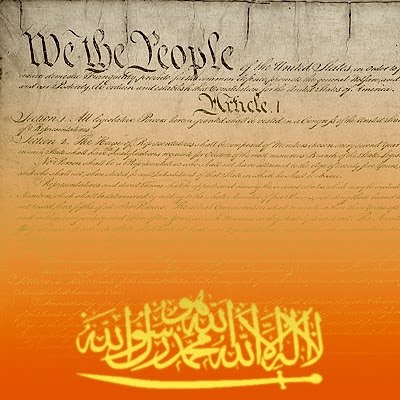 The Center for Security Policy has just released a massive study of the encroachment of sharia in American jurisprudence.

Controversies over several prominent applications of sharia in the USA have recently been featured in the news, but most Americans would expect that the total number of such cases is relatively small — just a few here and there.

However, this turns out not to be true: the stories that make the news are just the tip of the iceberg. Thanks to the dedicated work of David Yerushalmi and his associates, we now have a detailed listing of fifty such cases, and there are almost certainly many more.

According to Shariah in American Courts:

These cases are the stories of Muslim American families, mostly Muslim women and children, who were asking American courts to preserve their rights to equal protection and due process. These families came to America for freedom from the discriminatory and cruel laws of Shariah. When our courts then apply Shariah law in the lives of these families, and deny them equal protection, they are betraying the principles on which America was founded.

The study’s findings suggest that Shariah law has entered into state court decisions, in conflict with the Constitution and state public policy. Some commentators have said there are no more than one or two cases of Shariah law in U.S. state court cases; yet we found 50 significant cases just from the small sample of appellate published cases.

Others have asserted with certainty that state court judges will always reject any foreign law, including Shariah law, when it conflicts with the Constitution or state public policy; yet we found 15 Trial Court cases, and 12 Appellate Court cases, where Shariah was found to be applicable in these particular cases. The facts are the facts: some judges are making decisions deferring to Shariah law even when those decisions conflict with Constitutional protections.

Shariah Law and American State Courts: An Assessment of State Appellate Court Cases includes summaries of several cases in which the court’s application of Shariah law appears to be in direct conflict with Constitutional liberties and the public policies of the state.

A pdf version of the 630-page report may be downloaded here.

Below are excerpts from the introduction to the report:

With the publication of this study and subsequent studies now in preparation, our objective is to encourage an informed, serious and civil public debate and policymakers’ engagement with the issue of Shariah law in the United States of America. This public debate is more urgent than ever before, as organizations such as the Muslim Brotherhood and their salafist coalition partners state openly their intent to impose the Shariah State and Shariah law as dominant across all Muslim majority countries. Institutionalized, authoritative Shariah doctrine is comprehensive and by definition without limit in its ambitions and scope. It includes legally mandated, recommended, permitted, discouraged and prohibited practices that are explicitly biased against women, homosexuals, non-Muslims, former Muslims and those designated as blasphemers.

United States universities and colleges are increasingly offering courses and specializations In Shariah law, including business schools, law schools and general courses. The academic study of all kinds of comparative law including Shariah is worthwhile; but in many cases, these courses may not provide full information on the conflicts between Shariah and Western legal traditions and values.

In addition, there are organizations and individuals within the United States actively and openly advocating for the establishment of Shariah law in America, especially for personal status and family law. A prominent one is the Assembly of Muslim Jurists of America1 (AMJA) with more than 100 members including local Imams and Shariah authorities across America, as well as Shariah authorities from other countries. AMJA promotes the adherence to Shariah law when possible in all legal and civic activities by Muslim Americans, and in some cases, by non-Muslims.

Given these stated goals of AMJA and similar organizations, this study was conducted to discover the extent to which Shariah law had in fact entered U.S. state courts. News reports have identified individual cases of plaintiffs, defendants or judges citing Shariah or Islamic law. Many groups and individuals have raised concerns about state courts citing foreign and transnationalist laws and precedents, including Shariah law. The American Public Policy Alliance, a non-partisan organization that advocates for the Constitutionality of U.S. and state laws and public policies, has drafted the American Laws for American Courts Act (ALAC) to prevent enforcement of foreign legal decisions that violate Constitutional protections and liberties. That ALAC Act, which has passed in Tennessee, Louisiana and Arizona and to date has not been legally challenged on any grounds, was used as a methodological tool to define which Shariah- related cases in state courts were in conflict with the Constitution or state public policies.

This study is based on research and analysis conducted in 2010 and 2011 by the Center for Security Policy and the offices of the Center’s general counsel, attorney David Yerushalmi. Initial identification of potential cases was done by counsel, CSP staff and interns, and citizen volunteers from the non-profit organization ACT for America. Information regarding state cases reported upon here was retrieved through Google Scholar using search terms including “Islam,” “Islamic” “Muslim,” “Sharia” and “Shariah.” Additional search terms were countryspecific: “Iran,” “Pakistan,” “Egypt” and “Saudi Arabia,” all countries with Shariah-centric legal systems.

The sample we reviewed was only “the tip of the iceberg,” because Google Scholar is not a complete database of state cases involving Shariah. As a search tool it only allows retrieval of those reported appellate and trial court level cases that are available through open sources (See “Future Directions,” below). We found an initial sample of approximately 150 cases involving Shariah doctrine, which were narrowed to a set of 50 cases designated Relevant or Highly Relevant.

As you can see from the above description, there are at least a hundred more cases than were covered in detail by the CSP report.

Sharia is not just a threat — it is already here. It’s on its way to becoming the law of the land.

4 thoughts on “The Intrusion of Sharia into American Justice”