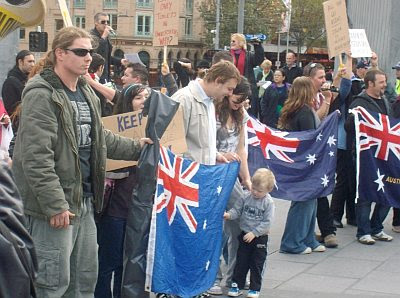 Whenever we Americans think about Australians, we picture a bunch of tough, straight-talking people who take no nonsense from anyone, and never give in to bullying. So it comes as a bit of a surprise to learn that despite the growth of Islam and Multiculturalism, no group has mounted a significant anti-sharia demonstration in Australia.

Until last Sunday, that is. On that day anti-jihad activists, led by the newly-formed Australian Defence League, gathered in Federation Square in Melbourne to protest the Islamization of Australia.

Below are excerpts from two reports on the May 15 demo in Melbourne. The first is from Nilk, who was present for the occasion (and who also took all the photos):

Standing Against Sharia or, Free Speech in ‘Melbun’.

Yesterday was the first demo of the Australian Defence League. We were standing against sharia in Australia, at Federation Square in Melbourne, because it’s about time that someone did and we’re also rather partial to free speech.

Over the course of the past few months, I’ve had people ask me why on earth I’d bother being involved with any sort of rally. “It’s not time.” “It’s racist.” “You’ll look just like those EDL thugs.”

And, of course, “You won’t accomplish anything.”

Needless to say, there are also people who think that the mere idea of speaking out against the islamification of your country is “racist”, but we already knew that and were expecting some opposition. 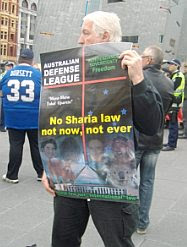 What began as a bit of a facebook group advertising as a “Rally Against Racism And Fascism” (using the acronym RAAF, which I find rather offensive to our Air Force, by the way) ended up as a fullblown socialist extravaganza with those twin pillars of democratic Western Civilisation the Socialist Alliance and their fellow travellers the Socialist Alternative shouting into megaphones at us such rhetoric as, “Muslims are welcome, racists are not!” and “F*** off, nazi scumbags! F*** off, nazi scum!”

Well, yesterday we had people from other groups standing with us. They were not there as representatives of those groups; just as Australians who are concerned about the imposition of sharia requirements on our country and culture.

We were a small group, too. I’ve heard of estimates of about 100 people, but I would hesitate to go that high. I’d say 60 max, but I need to check more photos. A quick glance here will give you a comparison, and according to the HeraldSun, 40 was more like it.

I won’t argue with that (much), because it was quite fluid with some people arriving later than others, and some leaving early. When it started getting physical, then some did leave.

This is understandable when you consider that the people who came were not professional or serial protesters like the opposition. 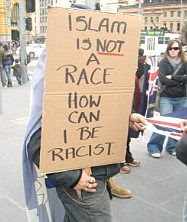 We don’t want special times at public swimming pools to cater to muslims who don’t want to share with the kuffar, or window coverings to protect those precious petals from our evil gaze.

We don’t want to have to hear about eid at christmas time, or all about how islam is wonderful. Tell that to the Royal Women’s Hospital with its FGM unit. While FGM is not exclusively an islamic practice, the majority of women and girls who have suffered it are muslim.

We just want our Australia back.

The enemies of freedom can tell the world that they won, and that’s fine.

It doesn’t mean that they did.

It just means that they beat up on a bunch of ordinary Australians who were exercising their legislated freedom to say, “We don’t want sharia in Australia”.

Beginnings Of The Australian Counterjihad: Australian Defence League (ADL) Holds Demonstration In Melbourne on 15 May 2011

Earlier today members of the Australian Counterjihad demonstrated against Islamisation in the city of Melbourne in the State of Victoria. Australia lags behind Europe and North America with regard to the intensity of Islamisation but its political elite seem determined to follow their lead and make the same disastrous mistakes that have strengthen the hand of Islamic fundamentalists.

The demonstration was compact but included key activists from across Australia and marked the public launch of the Australian Counterjihad. A broad range of Australians were present at the ADL demo from many age groups which illustrates the range of the population that is concerned about the Islamisation of Australia. This is how movements in Europe and North America were established and which now have tens of thousands of activists. Key regional organisers will go back to their local areas and grow their Divisions locally. The demonstration in Melbourne has been a good focus and a key catalyst for the strategic organisation of activists across Australasia. Networks are developing and the key nodes are now in place. This is just the beginning and we expect impressive progress with the Australian Counterjihad in the months and years ahead. 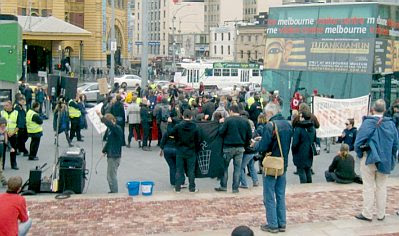 Patriotic Australians protest against sharia under the gaze of King Tut

Of course, as in Europe and North America, the media and politicians were quick off the mark to demonise the fledgling ADL rolling out the usual label designed to delegitimize without having to win an argument. Here is an article about the ADL demo from the Herald Sun that seems to focus on the reporting political pronouncements such as ‘bigotry would not be tolerated’ which erroneously implies that the ADL has an agenda of bigotry which could not be further from the truth. The powers that be are afraid that a mass movement will emerge that will bring their deliberate encouragement of Third World cheap labour immigration and its associated Islamisation to a halt. That would not sit very well with the globalised elite which national governments, such as that in Canberra, serve or face the consequences.

Again, like in Europe and North America, the usual left wing mob turned up to counter protest. This is often comprised of the misguided, the ill informed, and those who cannot tolerate anyone who is not a Marxist. These groups are quite happy to undermine freedom of speech, allowing only speech that is approved by their own narrow ideological stance. They cannot abide those with differing viewpoints and seem to have a deep seated hatred focused against Western Civilisation. The standard leftist tactic is to try to intimidate their opposition which they tried in Melbourne. Of course members of the Counterjihad held their ground and made their point despite their intimidation. 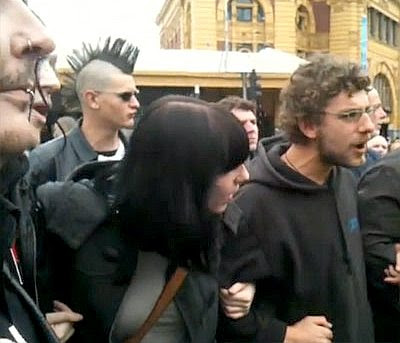 One of the speakers at the counterdemonstration seemed to take an extreme anti Western stance while wearing a symbol of Palestinian terrorists — the kaffiya. He seemed to think he was on the barricade in Russia in 1917. He also appeared to care more about refugees than Australians and the stability of Australia. Perhaps he believes that the sole purpose of Australia is to accommodate people from failed states to embrace the cultural norms that caused those states to fail. Of course we have a tradition of welcoming refugees in the West but in the past such refugees were willing to come on our terms and adapt to our culture. Today they come as colonists who demand that the West adapts to their preferences and it is that is at the heart of the problem of recent immigration. Those of a Marxist disposition are the ones who want the social problems that are caused by such colonisation because it undermines the ‘system’ that they so despise.

The demo in Melbourne was small but successful, key strategic objectives were met, and the basis of the Australian network was put in place. The Australian Defence League has started the ball rolling in Australia and it will grow both in terms of membership and success just like its counterparts which started small in Europe and North America.

Read the rest at ICLA.

13 thoughts on “Standing Against Sharia in Melbourne”