You know you’re being effective when CAIR comes after you.

The anti-sharia volunteers of Middle Tennessee are definitely being effective. According to Lou Ann Zelenik, the Executive Director of the Tennessee Freedom Coalition, Muslim lobbying groups such as CAIR have been pushing back in the wake of her organization’s event featuring Geert Wilders. “We definitely stirred things up,” she told me in a phone conversation last night. “CAIR demanded an apology from the Williamson County Republican Party for hosting Geert’s press conference. Can you believe that? An apology!

“Well, they can demand all they like, but they’re not gonna get one.”

Another sign of TFC’s effectiveness is the fact that the website for Olive Tree Education has been taken down. Olive Tree is an “educational” front that serves as a non-profit proselytizing service for the Islamic Center of Nashville. It was featured in TFC’s video exposé that aired last Thursday at the Geert Wilders event.

TFC’s investigation drew attention to the web of interconnections among Olive Tree, the Islamic Center of Nashville, radical imams at local mosques, Vanderbilt University, and various other educational institutions and ecumenical community groups.

The heat proved too much for Olive Tree Education, and they dropped their site, presumably to buy time so that they could scrub all the references and links to Anwar al-Awlaki and other hard-core mujahideen. As of this writing, however, a cached version of the site is still available, so interested readers should be able to find all those incriminating references that were cited in the video. Olive Tree’s blog is also still extant, although I’m not sure whether the same material may be found on it. 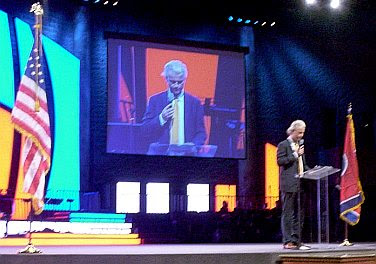 Here’s the official press release in which CAIR demanded that the GOP “repudiate” TFC and Geert Wilders:

Notorious Islamophobe Geert Wilders to be honored at Republican luncheon

WASHINGTON, May 12, 2011 /PRNewswire-USNewswire/ — The Council on American-Islamic Relations (CAIR) today called on state and national GOP leaders to repudiate a Tennessee event at which party officials will honor one of the world’s leading Islam-haters, extremist Dutch politician Geert Wilders.

A luncheon in Wilders’ honor will reportedly be held today [May 12th, the date of Mr. Wilders’ public appearances] at Williamson County Republican Party headquarters in Franklin, Tenn. Wilders is in Tennessee at the invitation of a group headed by former congressional candidate Lou Ann Zelenik, who once claimed that the construction of a new mosque would pose a threat to that state’s “moral and political foundation.”

The more I get to know these Tennessee volunteers, the more I appreciate them. I’m looking forward to their future initiatives — they know how to be effective when it comes to resisting Islamization.

2 thoughts on “Being Effective in Tennessee”